Alan Wells, 62, rescued Gilbert the vulture a year ago after the bird was headed for a life at Prague Zoo.
By Simona Kitanovska June 23, 2022
Facebook
Twitter
Linkedin
Email 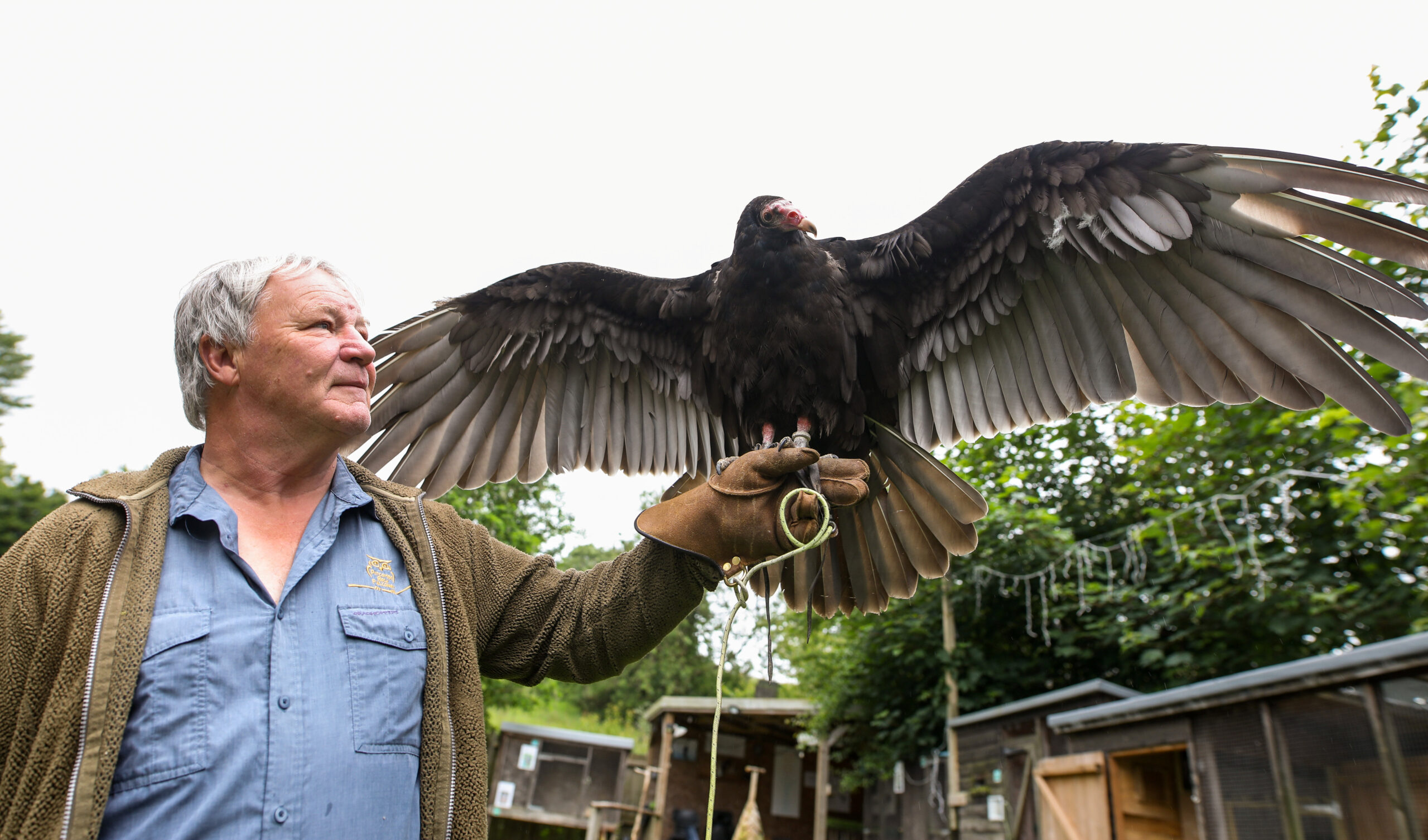 Neighbors are in a flap after a man adopted a large vulture - which visits local homes and gardens and interrupts tea parties. (Tom Wren/Zenger)

Neighbors are in a flap after a man adopted a large vulture- which visits local homes and gardens and interrupts tea parties.

Alan Wells, 62, rescued Gilbert the vulture a year ago after the bird was headed for a life at Prague Zoo – which then closed during lockdown.

Gilbert – who has a five-foot wingspan – now lives at Alan’s home in Somerset in southern England but regularly flies off to visit locals in their gardens.

The large turkey vulture can fly up to ten miles and some neighbors have kicked up a stink.

One described Gilbert as looking like he’s from ‘the pits of hell,’ saying that having it land in the garden was the ‘scariest experience of my life.’

He said: ”When I trained Gilbert a year ago my intention was to allow him to fly as free as I could.

”The thought of him landing in people’s gardens never entered my head.

“People have been in the back garden, in their patio, having afternoon tea, and he’s come right up, looking around the table, investigating the crumbs on the floor.

“It’s not every day you get a vulture come and land in your garden.

”My message to those who complain about Gilbert is that he’s inquisitive.

“I can’t really predict where he’s gonna go. He’ll go quite a distance and come home when he’s finished.

“He’s coming into your gardens because there’s something of interest in there to draw him in.

“That interest isn’t in the small children playing or the small pets, it will be a smell – usually from a dustbin or food waste bin.

“That’s what has drawn him in, but he won’t want a meal.

”He’s fed before he goes out flying, but it’s nice for him to be able to do what he does in the wild – investigate smells.

“As soon as he’s had an investigation and discovered that there’s nothing there for him, he’ll fly away.

“I would say to people that it’s a privilege to have Gilbert in your garden – enjoy him, see a little bit of nature you wouldn’t normally see.

“You wouldn’t get this close to a turkey vulture in a zoo or at a wildlife park.

“Don’t feed him, don’t attempt to pick him up, let him do what he wants.

”If he’s being a nuisance, call me and I will collect him – he has a GPS tag, so I know where he is all the time.

“A turkey vulture only eats dead stuff so if your pet, guinea pig, or rabbits are running around your garden, they are perfectly safe.”

Not all the neighbors have been welcoming to the new resident.

One said: “It’s probably one of the most terrifying experiences of my life.

“Walk out the front door, turn around and there’s this creature, almost like it’s come from the pits of hell and I find out it’s a bird named called Gilbert, so it’s quite an exciting experience really.”

Another said: “He’s not pretty, he sits on my bins and frankly, he flutters around and it’s pretty scary.”

Alan, of Bruton, Somerset, runs a falconry at home where he keeps a number of birds of prey, owls and even a family of ferrets.

Alan said it was a “golden opportunity” to add a vulture to his falconry, a not-for-profit organization that makes regular trips to schools and offers education visits.

Alan socialized Gilbert with other birds and allowed him to roam free in the falconry – spending time with his small dog Buster.

He said: “We keep ferrets here, and he’s not interested in them because they’re moving and they’re alive.

“My very small dog Buster, who’s Jack Russell-size, is smaller than a lamb – again, he’s not interested in him.

“He’ll go alongside him and preen him with his break and Buster will get up and look at him with distaste and move on.

“His diet consists of day-old chicks, which are male birds supplied by the egg industry, he also enjoys rats, quail, chickens, pheasant, and sometimes lamb.

“He only eats dead stuff. There are a few vultures within the 22 species in the world that do actually kill their food, but he’s not one of them and he’s not interested in anything that’s that alive.”

Alan says Gilbert hasn’t got sharp talons to do any damage, and added that pets and children aren’t at risk.

Gilbert had been bound for Prague Zoo but when the attraction closed to visitors during the pandemic he was taken in by Mr. Wells.