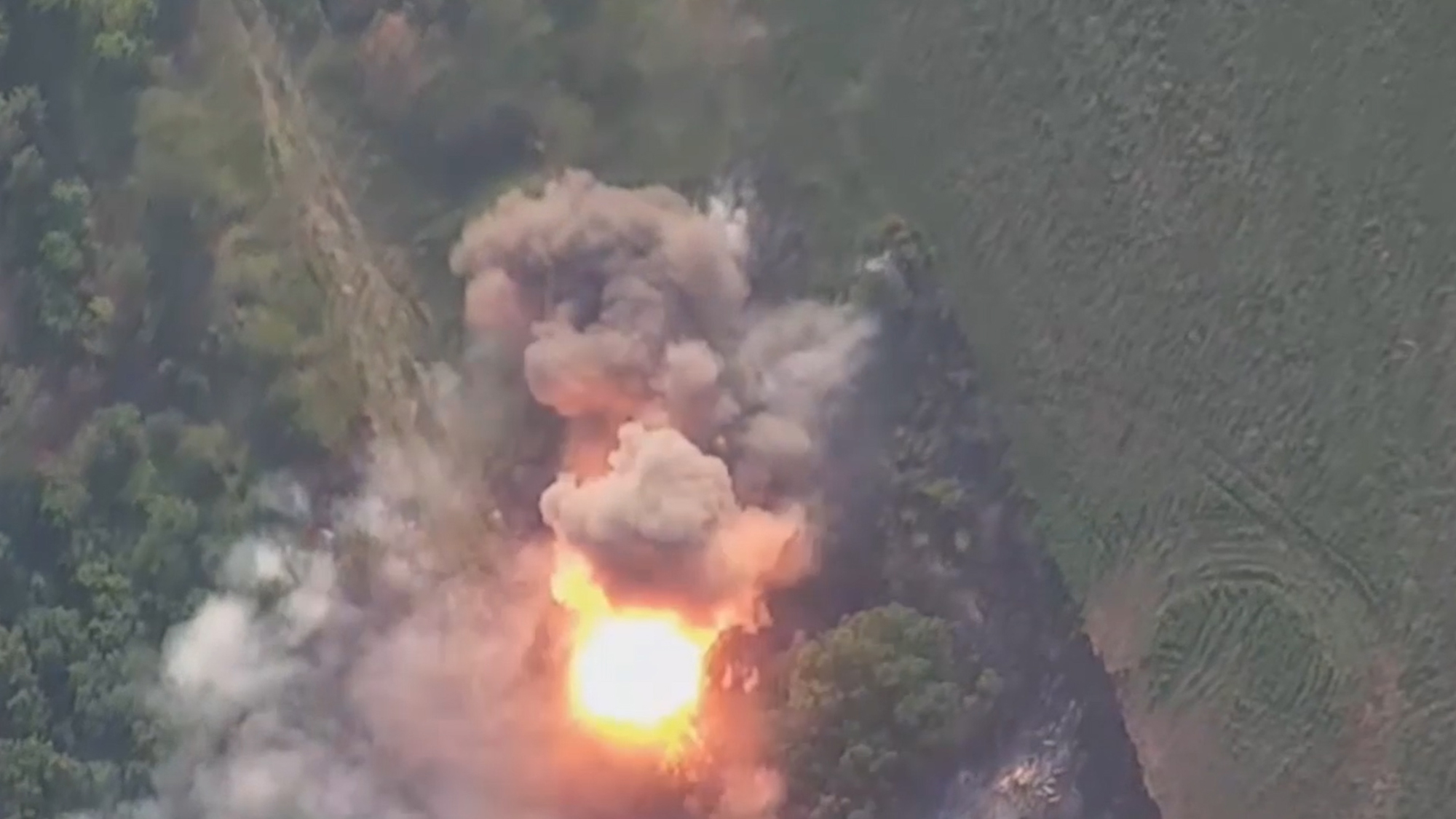 Destruction of Ukraine's manpower and military equipment by the Russian Armed forces in Ukraine. (@mod_russia/Zenger)

These images purport to show Russian forces targeting and successfully firing on Ukrainian targets while claiming to have destroyed equipment provided by the United States and European countries.

The Russian Ministry of Defense (MoD) said that the images show the “destruction of Ukraine’s manpower and military equipment by the Russian Armed forces in Ukraine.”

They also said that “M777 155-mm howitzers delivered by USA and European countries to Ukraine have become a good target for Russian destruction means. Fifteen howitzers, mostly yet unused and deployed near Druzhkovka railway station, have been destroyed over the past 24 hours.”

It is currently unclear where exactly in Ukraine the images were filmed. They appear to be a montage of various different operations over the last few days. We have not been able to independently verify the claims or the footage.

The Russian Ministry of Defense (MoD) said in a lengthy statement (in English), summarizing a briefing given by Igor Konashenkov, 56, the chief spokesman for the Russian MoD, on Tuesday, June 21: “The Armed Forces of the Russian Federation continue the special military operation in Ukraine.

“The plan of the operation composed by the Kiev regime was supposed to launch massive air and artillery attacks at Snake Island, to disembark troops and capture it.

“Ukrainian UAVs were supported in air by S-300 air defense systems from their combat positions near Tuzla and Ochakov.

“Missile and artillery attacks at Snake Island were launched by Ukrainian Tochka-U ballistic missiles, Uragan multiple rocket launchers and M777 155-mm howitzers from their combat positions to the west from Odessa and in Kubansky island.

“No Ukrainian destruction means have reached their targets in Snake Island.

“The unsuccessful fire attack forced the enemy to abandon the landing to Snake Island.

“After being convinced that the attempt to seize the island had failed, the Kiev regime took an attempt of a new gamble related to Russian gas infrastructure facilities in the north-western part of the Black Sea.

“After 08.00 AM, anti-ship missiles and a Bayraktar-TB2 UAV attacked BK-1 and Krym-1 gas production platforms.

“The Ukrainian provocation has resulted in an intensive fire at BK-1 platform, this area of the Black Sea has resulted to be in danger of an environmental disaster.

“Sabotages of the Kiev regime have been reflected by launching Oniks cruise missiles at Shkolny military airfield near Odessa and the destruction of the hangars for Ukrainian Bayraktar-TB2 UAVs detected by Russian reconnaissance means.

“Two artillery platoons of M777 155-mm howitzers have been destroyed in Kubansky island.

“In addition, manpower and military equipment of the Armed Forces of Ukraine (AFU), as well as of nationalist groups, including the Right Sector, have been neutralized near Belaya Gora, Novodruzhesk, Mirnaya Dolina, Podlesnoye and Volcheyarovka.

“Within counter-battery warfare towards Donetsk, two platoons of Uragan multiple rocket launchers have been neutralized near Zaryanoye and Dimitrov, as well as 2 platoons of Giatsint-B 152-mm howitzers at their firing positions near Spartak and Podgornoye.

“Operational-tactical and army aviation has neutralized: 57 manpower and military equipment concentration areas, one command post of the AFU, as well as a multi-function missile guidance radars of S-300 air defense system near Seversk (Donetsk People’s Republic).”

In a second statement, the Russian MoD said: “Missile troops and artillery have neutralized: 216 manpower and military equipment concentration areas of the AFU, 28 command posts, 64 artillery units at their firing positions, as well as two munitions depots.

“Attacks launched by aviation, missile troops and artillery have resulted in 570 nationalists, 29 tanks and other armored combat vehicles, as well as 16 special vehicles.

“Russian air defense troops have shot down one Su-25 of the Ukrainian Air Force near Mazanovka (Kharkov region).

“Only 28 servicemen of the 57th Mechanized Brigade of the AFU that operates in Severodonetsk have remained in the ranks, the other has been left only with commanders.

“Reserves for replenishing the losses are exhausted. Territorial Defense battalions that arrive from the western regions of Ukraine for reinforcing refuse to head to the front.

“Servicemen of the 101st Territorial Defense Brigade of the AFU have stated that the refuse to be involved in the operations and headed to the rear area in the responsibility zone of Soledar operational tactical group.

“There are more than 600 persons who have refused to fight.

“M777 155-mm howitzers delivered by USA and European countries to Ukraine have become a good target for Russian destruction means.

“Fifteen howitzers, mostly yet unused and deployed near Druzhkovka railway station, have been destroyed over the past 24 hours.

“Residents of settlements adjacent to operations zones in Dnepropetrovsk, Kharkov and Zaporozhye regions are being forcibly mobilized. National police units block the settlements for these purposes. Men of all ages are detained to be mobilized.

“Kiev regime spreads information about an allegedly secret trip of Zelenskyy to Lisichansk where he faced a shelling.

“At the same time, the group of Ukrainian troops near Lisichansk has been cut off from supplies and is being under firing control of the Russian Armed Forces.

“According to the Ukrainian prisoners, units of the 79th Airborne Assault Brigade have been abandoned by their commanders.

“Servicemen who remained alive had nothing to do but to surrender for saving their lives.

“The same situation is in the 57th Mechanized Brigade of the AFU. After losing the two thirds of personnel, its commander begged the group command to inform the AFU General Staff and Zelenskyy in person about the real situation.

“Kiev regime continues spreading fake news in the best traditions of Kvartal-95 amid its military failures for doing something to stop the panic and the escape of its personnel from Donbas.”

Russia invaded Ukraine on February 24 in what the Kremlin continues to dub a “special military operation.” June 21 marks the 118th day of the invasion.