The paintings were uncovered at a property in the West Midlands region of England.
By Simona Kitanovska June 23, 2022
Facebook
Twitter
Linkedin
Email 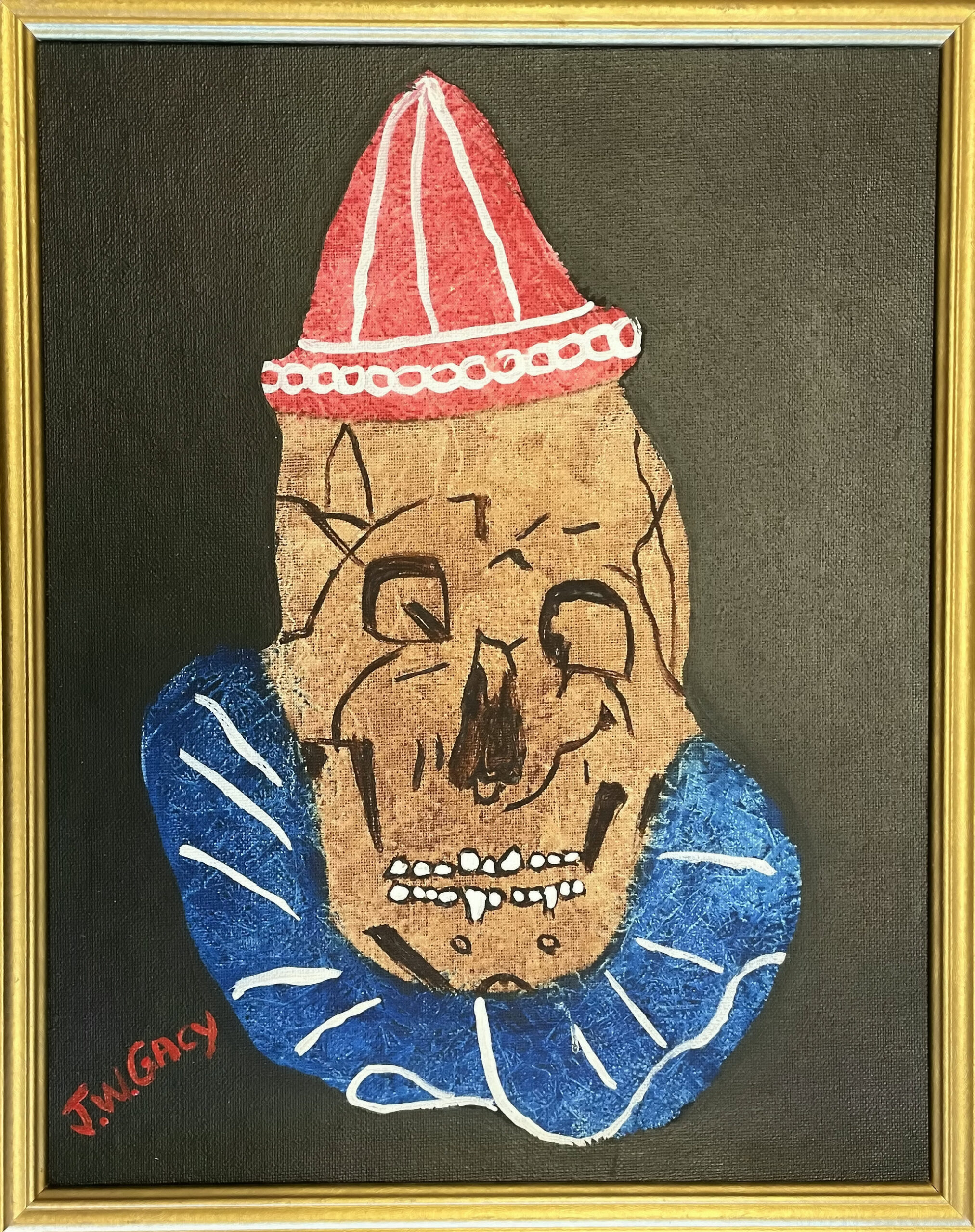 A set of creepy oil paintings by notorious 'killer clown' John Wayne Gacy could fetch thousands at auction after being found gathering dust in a cupboard at a UK house. (Steve Chatterley/Zenger)

A set of creepy oil paintings by notorious ‘killer clown’ John Wayne Gacy could fetch thousands at auction after being found gathering dust in a cupboard at house in England.

The American serial killer made the sinister artwork which depicts a terrifying skull-faced clown, Jesus Christ and The Seven Dwarfs on death row during the 1990s.

The paintings were uncovered at a property in the West Midlands region of England after the owners died – leaving a stunned son to make the discovery in his parent’s cupboard.

The pieces, which are signed by Gacy, provide a chilling insight into the warped mind of one of America’s most deadly serial killers.

Gacy, the inspiration for Stephen King’s bestselling horror novel ‘It’, which became a hit movie, sexually assaulted, tortured and murdered at least 33 boys and young men between 1972 and 1978 in Chicago.

His twisted crimes are currently subject of a Netflix series ‘Conversations with a Killer: The John Wayne Gacy Tapes.’

It has been described by some viewers as one of the most disturbing documentaries ever made, while others said they were left “sick to the stomach” watching the show.

Gacy was sentenced to death and was killed by lethal injection in May 1994 after confessing to 33 murders.

He worked as an entertainer at children’s birthday parties while dressed as ‘Pogo The Clown’, leading him to be dubbed the ‘killer clown.’

He often promised victims alcohol and drugs to gain their trust – but he would handcuff their hands together before killing them at his home on West Summerdale Avenue.

A total of 29 bodies were discovered by police buried underneath his property while other corpses were disposed of in the Des Plaines River when he ran out of room.

Gacy began painting behind bars while awaiting execution and in 1994, his attorney auctioned off his artwork.

Some of it was purchased and destroyed in a bonfire attended by hundreds of people, including some surviving family members of Gacy’s victims.

Some of his paintings have caused controversy by being exhibited in galleries across America but they are said to be rare to find them in Britain.

The eerie artwork will now be sold by Mullock’s Auctioneers, in Shropshire, western England, where they are expected to fetch more than $6,000 in an online auction on Thursday, June 23.

Ben Jones, consultant at Mullock’s Auctioneers, said: “These particular paintings all come from the same home.

“They were purchased by the vendors’ parents many years ago and simply left in the house for decades.

“When the parents passed away, they were found in the cupboard, with no further details or paperwork as to where or when they were purchased.

“The vendor had no idea the parents had them, so was a little surprised when they did come across them.

“He believed they could have been purchased when his parents toured the USA. Gacy’s artwork can be found quite widely in America but it is rare to find his paintings here.

“I have seen a Snow White-themed one entitled ‘Hi Ho’ before, but this winter scene is not something we have come across before and could be rather unique.

“They are quite fascinating but are, of course, incredibly sinister knowing what this man did.

“We wish we knew a bit more about their origin, but it’s a bit of a mystery how these paintings came over here and ended up in a cupboard for so long.

“We have had previous paintings produced by serial killers which have sold; there is a following for such items and they can often be desired.

“It is in many instances another form of investment as these items can appreciate in value over time.”

The three paintings are entitled ‘Christ’, Skull Clown’ and ‘Hi Ho in the Winter 92’ and are all signed by Gacy.

The Snow White-themed image, expected to fetch more than $4,800, which features the Seven Dwarfs with a snowy backdrop, comes with a handwritten note by Gacy.

It reads: “Enjoy this painting as much as I enjoyed doing it for you, Best wishes John W Gacy.”