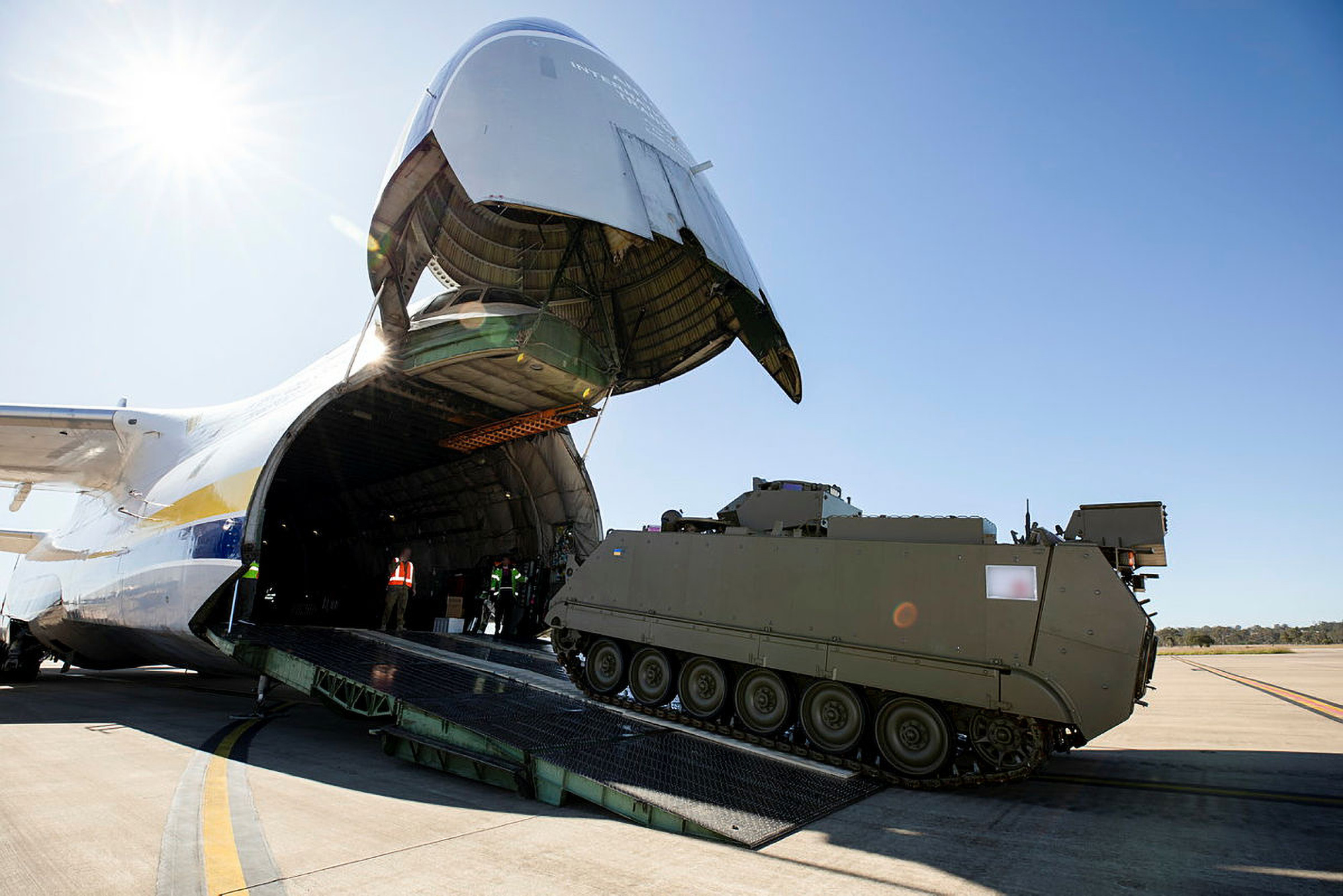 A M113AS4 Armored Personnel Carrier bound for Ukraine is loaded onto an Antonov An-124 cargo aircraft at RAAF Base Amberley in Queensland, Australia. (Australian Ministry of Defense/Zenger)

These images show the first armored personnel carriers that Australia is sending to Ukraine being prepared for combat and loaded onto a large plane before the aircraft takes off for the battlefields of Europe.

The footage shows the first four M113AS4 armored personnel carriers – out of a total of 14 promised – being prepared for transport.

They can be seen being given a new coat of paint and being equipped with long guns before being tested for combat readiness.

Insignia bearing the flag of Ukraine alongside a kangaroo can also be seen being put on the military vehicles.

The M113AS4s, an Australian upgrade to the American-made M113 armored personnel carrier, are then loaded onto a large Ukrainian Antonov AN-124 aircraft before it takes off into the skies. Its destination: Europe and the Ukrainian battlefields.

Zenger News obtained the images from the Australian Ministry of Defense (MoD) along with a statement saying: “The first four M113AS4 Armored Personnel Carriers being gifted to Ukraine departed RAAF Base Amberley last week.

“Loaded into a Ukrainian Antonov AN-124 aircraft, the four vehicles are the first of 14 M113AS4s to be provided by Australia.

The M113 was originally developed by the United States and was first used in 1962 in Vietnam. While the United States Army has been gradually phasing them out in favor of M2 and M3 Bradley armored vehicles, thousands are still in use in support roles, serving as armored ambulances, as well as engineer and command vehicles.

Australia currently has about 700 M113AS4s, which are primarily used for reconnaissance.

The Australian MoD statement also said: “Prime Minister, The Hon. Anthony Albanese said the latest shipment of military assistance responds to a direct request by the Minister of Defense of Ukraine for additional vehicles and demonstrates Australia’s sustained commitment to the people of Ukraine.”

The Australian Prime Minister is quoted in the MoD statement as saying: “Australia, like many nations, condemns the continuing unwarranted aggression of Russia against the people of Ukraine.

“Our nation has stood by Ukraine since the beginning of this unlawful conflict and we are proud to be able to provide access to significant capabilities such as the Armored Personnel Carriers that have traveled in the past week.”

And Deputy Prime Minister Richard Marles said in the MoD statement: “We will continue to look at ways we can best help the people of Ukraine. Australia stands with Ukraine, and again calls on Russia to cease its unprovoked, unjust and illegal invasion of Ukraine.”

“Developed in Australia, the AS4 is a modernized variant based upon the highly effective M113 series which have served the Australian Army and many other forces with great success since the 1960s.

“Along with the proven Bushmaster Protected Mobility Vehicles, the M113AS4s will provide valuable protected mobility for Ukraine forces, joining similar capabilities being gifted from across the globe.”

The Ukrainian Ministry of Defense (MoD) has officially thanked the Australians for their assistance, saying in English: “Ukraine will not forget this. Another batch of Australian armored vehicles are on their way to Ukraine.

“These are 4 of the 14 M113 armored personnel carriers promised by the Australian government. A half-world-long aviation aid bridge unites our people in these difficult times for Ukraine.”

Australia is not a member of NATO but it works closely with the Alliance, of which it is an official partner.