“In the Kharkiv region, the enemy tried to carry out another attack, but received a decisive response from the Armed Forces. 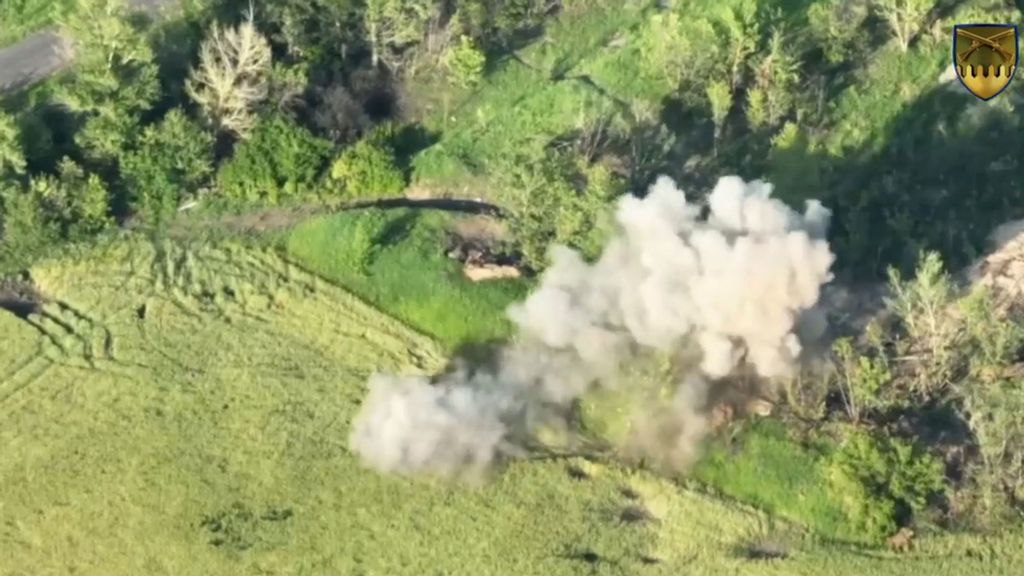 As a result of the joint work of fighters of the Ukrainian Armed forces Russians reportedly lost 23 soldiers while 50 were wounded in the Kharkiv region in Ukraine on June 19, 2022. (@StratcomCentreUA/Zenger)

These images reportedly show the moment Ukrainian troops pummel Russian soldiers while the latter tried to make progress in taking the Kharkiv region in north-eastern Ukraine.

The released footage, which appears to have been shot from a drone, reportedly shows Russian positions being repeatedly targeted and hit by Ukrainian artillery fire, with Ukrainians saying that they had also damaged Russian military equipment.

The images were obtained from the Center for Strategic Communications and Information Security, which is part of the Ukrainian government, under the Ministry of Culture and Information, on the evening of Monday, June 20, with the Center saying: “Minus 23 occupiers! Successes of the Armed Forces in Kharkiv region.

“In the Kharkiv region, the enemy tried to carry out another attack, but received a decisive response from the Armed Forces.

“As a result of the joint work of fighters of the 92nd Mechanized Brigade, the 40th OABR and the 125th Terror Defense Battalion, on June 19, 23 ‘orcs’ were neutralized and more than 50 were wounded.”

The Center signed off by saying: “Our defenders hold the line and inflict losses on the enemy! We believe in the Armed Forces!”
We contacted Russian and Ukrainian officials for comment but had not received a reply at the time of writing.

Russia invaded Ukraine on February 24 in what the Kremlin is calling a “special military operation” to “liberate the Donbas.” June 21 marks the 118th day of the invasion.

Russia has also conducted an anti-ship missile exercise in the Baltic Sea amid escalating tensions with NATO member Lithuania after the latter country blocked the transit of goods to the Russian exclave of Kaliningrad.

President Joe Biden has promised Kyiv another billion dollars in security assistance and weapons. And the Chairman of the Joint Chiefs of Staff, General Mark Milley, says Russia has lost around 20 to 30 percent of its armored force during the ongoing invasion.

Muratov has been a vocal advocate for the freedom of the press and argued that it needs to remain independent from state influence.