How Music Saved The Oldest Anglican Church In Chile 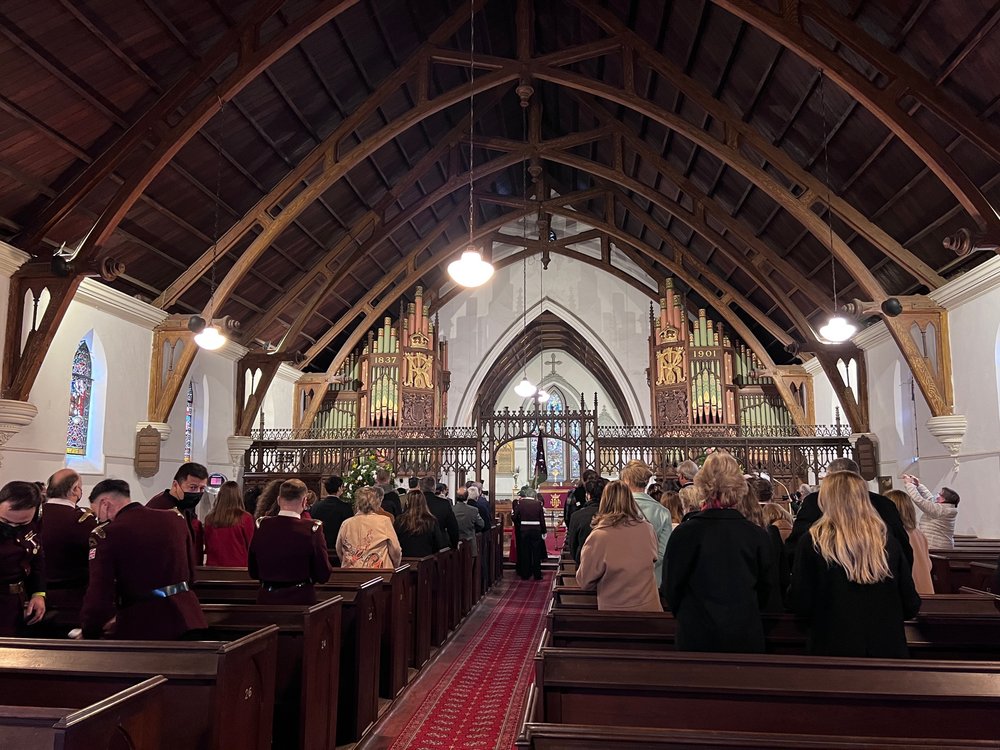 Every Sunday, the Anglican cathedral of St. Paul in Valparaíso, Chile, opens its doors at noon to welcome visitors who come to listen to concerts. This routine played out on a century-old organ has kept the church alive for the last 30 years.

Built in 1858, St. Paul’s used to bring together the British community that settled in Valparaíso, the country’s main port, following Chile’s independence from the Spanish Empire in 1818. The city became a hub for immigrants, led by the British and Germans, who were followed by the Italians, French and Spanish.

During the 20th century, many in those communities immigrated to the neighboring city of Viña del Mar or to the capital, Santiago. With fewer parishioners to serve, St. Paul’s deteriorated. The situation was dire when Oenone Gray, along with her friend Roland Geddes, who passed away in 2003, launched an effort to save the church.

The now 88-year-old Gray, along with Geddes and Jorge Cavajal, a native of Valparaíso, started the St. Paul’s restoration committee in 1990.

Water had been coming inside the church on rainy days back then, and the organ with the inscription VIR (for Victoria Imperatrix Regina) was falling apart. Many of the organ’s notes didn’t sound, so Geddes focused on it. “He loved music,” Gray said. “He began going to the church and started fixing the organ.”

Built by Forster and Andrews in England, the Queen Victoria Memorial Organ arrived in Valparaíso in 1902. An 8.2-magnitude earthquake in 1906 destroyed much of the city and damaged the organ. Forster and Andrews staff came to Valparaíso to restore it in 1910, and for the next 80 years, it underwent minimal repairs,

Italo Olivares, who has been playing the organ since 1980, said Geddes passed on his passion for fixing the instrument to Christian Sundt, an organist now in charge of its maintenance.

“The organ in St. Paul’s is one of the best in Chile,” Olivares said. “And it’s alive. You can listen to its music.”

The organ has 33 families of tubes and 1,604 pipes of different sizes, according to the church’s website.

Chile lacks an organist culture compared to neighboring Argentina or to countries in Europe. Many of these instruments have deteriorated, and there’s been little interest shown in Chile about repairing them, Olivares said. He came to St. Paul’s as a music student and asked the pastor for permission to practice. The pastor agreed on the condition that Olivares play for free at the Sunday service. He has remained organist at St. Paul’s ever since.

English engineer William Henry Lloyd, who had come to Chile to build railway bridges, erected St. Paul’s. It was a time when there was no religious freedom in Chile, so the new building had to be discreet. It had small windows and no main door. It also had no spire, cross or bell tower on the outside. The goal was to arrange it so that the building would seem like just one more house in the Cerro Concepción hill neighborhood.

St. Paul’s was the first Anglican church in Chile and on the west coast of South America. Partial religious freedom arrived seven years after it was erected, in 1865. In 1979, the Chilean government declared St. Paul’s a historical monument. In 2016 it became a cathedral.

Built in a neo-Gothic style with a single nave, the church covers a surface of 5,415 square feet. Lloyd employed avant-garde techniques by using laminated Oregon pine beams attached with nails and screws to form the ceiling arches. The building has choir and a chancel separated by a root screen from the nave. It also has a baptistery with three stained-glass windows.

At the time of St. Paul’s construction, Valparaíso was a thriving port. Its location on the sea route through Cape Horn to and from Europe helped foster trade and develop the nascent Chile. In 1840, British and German immigrants started urbanizing today’s touristy Cerro Concepción and the neighboring Cerro Alegre hill. St. Paul’s registries show that seamen, merchants, masons, piano builders, shipbuilders, musicians, candle makers, artists and engineers were among those who attended the church, according to its website.

While the Italians were more numerous in the city by the end of the 19th century, the British were more influential. In 1823, they started a project with the Germans to build a new cemetery that was later called Dissidents Cemetery. It was located in today’s Panteón hill. The area was then on the outskirts of the city.

Today it’s also a touristy spot half a mile from Cerro Concepción. For decades, this cemetery was the only place in Chile where Protestants could be buried. Following the construction of the cemetery, the British community built St. Paul’s.

“My great-grandfather was one of the first who gave money for the construction of the church,” said Gray. Her parents got married there. Then she, her daughter and her grandson did. Four generations of her family have walked down the same aisle.

In 1995, the church’s restoration committee launched a program called Music in the Heights to attract visitors. These 30- to 45-minute free organ concerts take place every Sunday at 12:30 p.m. and are the only organ concerts in Chile held on a regular basis. Usually, about 20 to 30 people attend, mostly tourists visiting Valparaíso and people who come especially to listen to the organ. “The relationship with the public is very warm,” said Olivares.

“The organ was always the heartbeat of the church,” said Gray. When she and Geddes began to work together, there was no longer an Anglican community to fill the building. “So it occurred to us to do something with music,” she said. “All of this has been absolutely quixotic,” she added with a laugh.

In recent years, Christine Evans, a former teacher at St. Margaret’s British School for Girls in Viña del Mar, and Gray’s niece Michelle Prain, a university professor and author of the book “British Legacy in Valparaíso,” joined the committee. In the restoration process, they have received donations from neighbors, friends and a local firm.

Other sources of income include renting out St. Paul’s for weddings and music lessons and donations from visitors who attend the Sunday concerts. The Anglican Episcopal Church Corporation gives a subsidy that covers water and electricity bills, and the Cerro Concepción’s neighborhood union helps by painting the graffiti when it appears on the walls of the church.

Instead of the regular concert on Sunday, June 5, St. Paul’s celebrated Queen Elizabeth’s Platinum Jubilee. The service was presided over by the bishop of Valparaíso and attended by British descendants, the British ambassador to Chile, students from the four British schools in Viña del Mar and firemen from the 11th Fire Company “George Garland,” which was founded by 13 British citizens in Valparaíso in 1901.

Everyone listened to the organ played by Olivares, who had both the Chilean and the British national anthems in his repertoire. It was a sunny day in which the organ proved once again to be the heartbeat of the church.

Graciela Ibáñez is a journalist and translator with a master of arts from Columbia Journalism School, where she graduated in 2008. She works as a freelance reporter covering Chile for foreign media outlets.