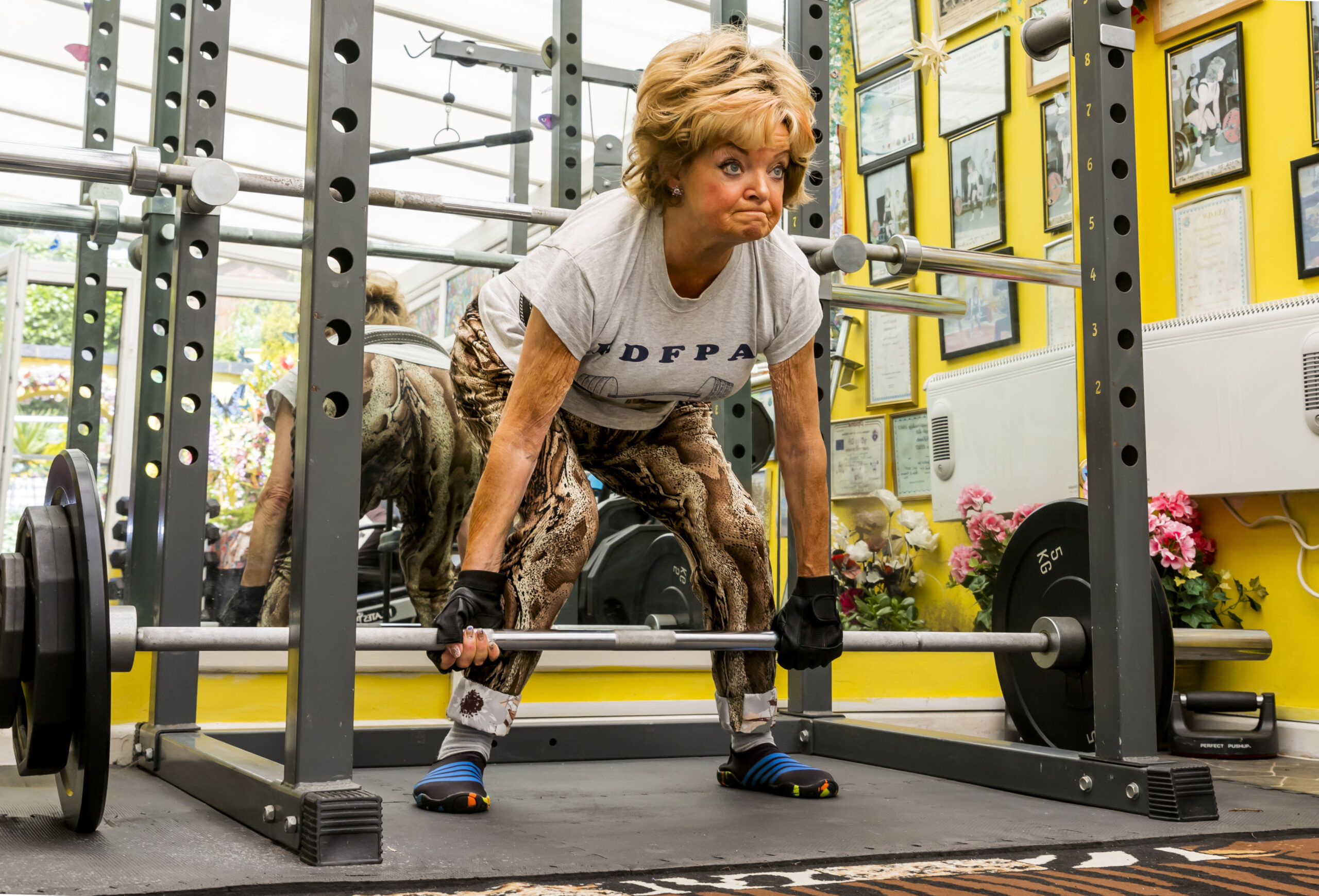 Britain's toughest gran cheated death three times to become a champion powerlifter and is still pumping iron at the age of 76. (Simon Galloway/Zenger)

Britain’s toughest grandmother cheated death three times to become a champion powerlifter and is still pumping iron at the age of 76.

She took up the sport in 1982, when she was aged 36 after receiving her first terminal diagnosis due to a brain tumor.

The grandmother-of-two swapped to a plant-based diet and began running marathons and bodybuilding in the hope it would stop her slow-growing tumor.

She was encouraged by her bodybuilding coach to try powerlifting and fell in love with it – quickly smashing records and securing titles at competitions she entered.

For 10 years she traveled the world competing in national and global events – deadlifting 135 kilos (297 pounds) at a bodyweight of 42 kilos (92 pounds) in her heyday.

But at 48, she was devastated by another terminal cancer diagnosis – this time she was told she had osteosarcoma – a type of bone cancer in December 1993.

Pat refused to let it defeat her and continued with her healthy and active lifestyle in a bid to shrink the 14 tumors and she was declared cancer-free in mid-2016.

In September 2018 she was involved in a high-speed crash that killed her driver and the driver of the other vehicle on Germany’s autobahn.

The accident left Pat with crushed lungs and led to pulmonary fibrosis – a lung disease that occurs when lung tissue becomes damaged and scarred – and she was told she only had three months to live in June 2019.

It was a new BDFPA and WDFPF record for her age and weight category – and has no plans of stopping.

Pat, a nutritionist from Kingswinford, in England’s West Midlands region, said: “As soon as I got sick it sparked a competitive side of me and I fell in love with powerlifting.

“When my coach first mentioned it, I thought he must be crazy when he told me how much these tiny girls were lifting.

“My cancer diagnosis gave me this new way of living and thinking.

“I traveled the world competing and smashing records.

“I can’t think of a world where I am not powerlifting.”

Pat refused to accept she would only live for two more years after her cancer diagnosis in 1982 and looked into ways she could extend her life.

“I was never in one place for very long due to my workload,” Pat said.

“I would jet off all over the place for my powerlifting events and to Germany for the clinics.

“I had such a big thrill at every event and when I did well.”

Pat has broken around 200 records and can lift up to nearly 300 pounds.

Having already beat her first cancer diagnosis, she was shocked when her knee pain turned out to be bone cancer when she was just 48.

But Pat took it in her stride and has now “deactivated” all her tumors.

She joined the British Drug-Free Powerlifting Association in 2005 and continued her powerlifting.

But her accident in 2018 took a lot to get over mentally and physically.

“I’d been involved in crashes before but nothing so serious.”

Pat was told she would only have three months to live after being diagnosed with pulmonary fibrosis, but she has defied the odds again.

“It does still affect me,” she said.

“But I’ve found a way to train and still powerlift even with my setbacks.”

Pat requires supplemental oxygen most days but is still able to train three deadlifts a week and bench work four times a week.

In March 2022 she beat the world record by lifting just over 133 pounds and is set to smash it again in September 2022.

“I can only do one single repetition now,” said Pat, an author of A Living Miracle.

“I’ve had to adapt my training within my capabilities since the accident- but I’ve found what works for me.

“But I’m still breaking my records and doing what I love.

“I’m the oldest female going in my association.

“I may not be able to climb stairs or slopes, but I can still powerlift.