The finding is based on more than 1,200 people tracked for over 30 years.
By Darko Manevski June 21, 2022
Facebook
Twitter
Linkedin
Email 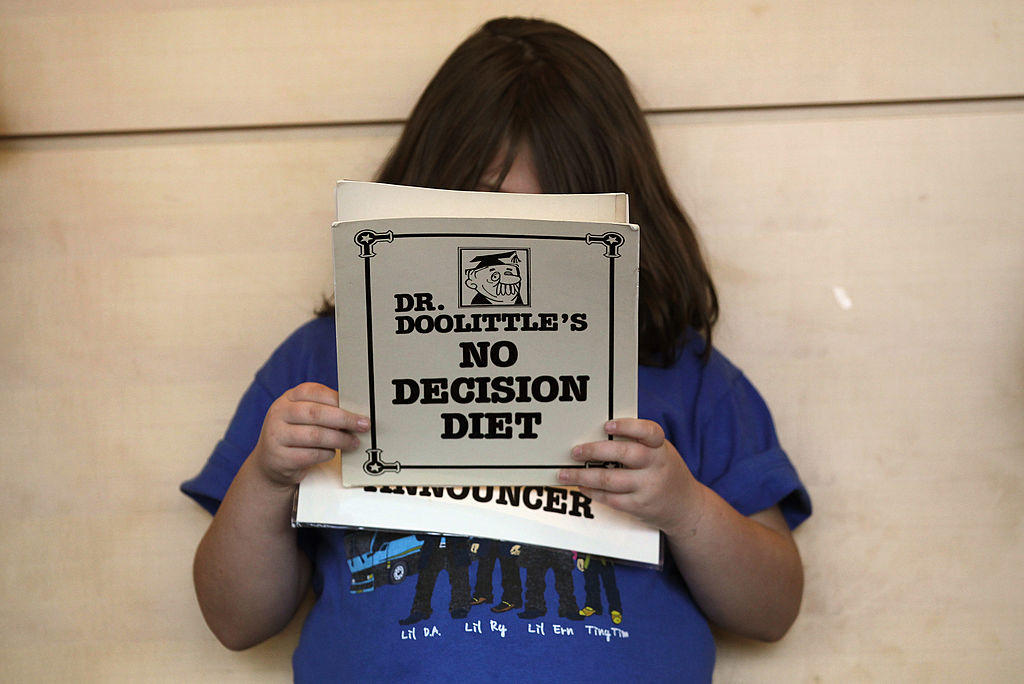 An overweight child reads her part in a humorous skit held during the Shapedown program for overweight adolescents and children on November 20, 2010 in Aurora, Colorado. (Photo by John Moore/Getty Images)

Children who are obese are more prone to dementia decades later, according to new research.

Obesity increases the risk of cognitive decline in middle age – which can lead to full-blown dementia.

The finding is based on more than 1,200 people tracked for over 30 years – starting when they were at school.

Lead author Professor Michele Callisaya, of Monash University in Melbourne, Australia, said: “Developing strategies that improve low fitness and decrease obesity levels in childhood are important because it could contribute to improvements in cognitive performance in midlife.

“Importantly the study also indicates protective strategies against future cognitive decline may need to start as far back as early childhood, so the brain can develop sufficient reserve against developing conditions such as dementia in older life.”

Dementia cases worldwide will triple to over 150 million by 2050. With no cure in sight, there is an increasing focus on lifestyle factors that reduce the risk.

They include getting enough exercise, eating plenty of oily fish, fruit and vegetables – while cutting down on fatty and sugary foods.

The study in the Journal of Science and Medicine in Sport is the first of its kind. It began in 1985 when the 1,244 Australian participants were aged seven to 15.

They were assessed for fitness – including cardiorespiratory and muscular power and endurance tests – and waist-to-hip ratio (anthropometry) measurements were taken.

They were followed up between 2017 and 2019 by which time they were 39 to 50. They underwent a series of computer tasks that challenged brain power

Those with the highest levels of cardio-respiratory and muscular fitness and lower average waist-to-hip ratio in childhood had better processing speed and attention.

They also had superior global cognitive function – an overall ability to carry out everyday activities and chores.

Decline can begin as early as middle age, said Professor Callisaya. Lower performance has been associated with mild cognitive impairment and dementia in older age.

It is known children who develop muscular strength, cardiorespiratory fitness and endurance due to sport and activity have better health outcomes later in life.

It is the first significant study to look for links between objectively measured fitness and obesity in childhood with cognition in middle age.

The idea is that early activity levels, fitness and metabolic health may protect against dementia in our older years.

In the UK a quarter of children are obese and a further one in seven are overweight. Over 920,000 Britons have dementia – a figure that will rise to two million in the next three decades.