In the footage, Russian soldiers can be seen preparing the military vehicle before it fires volleys of missiles into the air.
By Joseph Golder June 21, 2022
Facebook
Twitter
Linkedin
Email 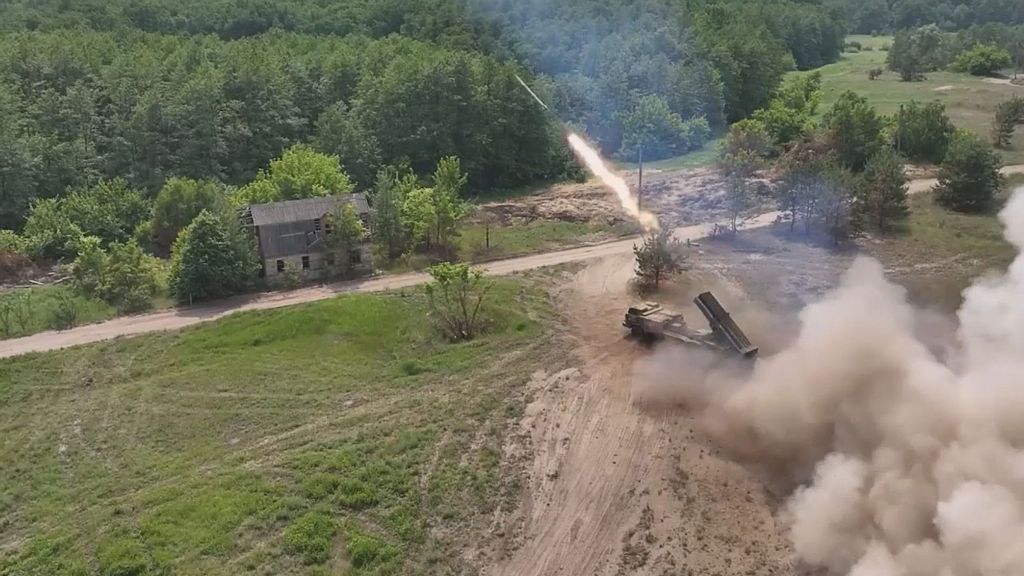 The Combat work of the calculation of the MLRS Hurricane in Ukraine. (Ministry of Defense of Russia/Zenger)

These images appear to show a Russian multiple rocket launcher vehicle calibrating its targeting system before it opens fire on Ukrainian targets, firing volleys of missiles into the sky.

In the footage, Russian soldiers can be seen preparing the military vehicle before it fires volleys of missiles into the air.

The footage then cuts to what appears to be an aerial view of a location somewhere in Ukraine, with the ordnance apparently hitting Ukrainian positions.

The footage then shows the military vehicle, which boasts a large, white letter ‘Z’ daubed on the front, stowing its weaponry before it is filmed from above by a drone driving away to a new location.

It is currently unclear where exactly in Ukraine the images were filmed, but the footage was obtained from the Russian Ministry of Defense (MoD) along with a statement on the evening of Sunday, June 19, saying that the video shows the “combat work of the crews of the MLRS [Multiple Launch Rocket System] ‘Uragan’ of the Western Military District in the performance of fire missions to destroy the positions of the Armed Forces of Ukraine during a special military operation.”

The Russian MoD also said: “In the course of aerial reconnaissance, the crews of the Orlan-10 unmanned aerial vehicles systems revealed camouflaged positions of the Armed Forces of Ukraine and transmitted information to the artillery command post.

“After receiving the coordinates of the targets, the calculations of the 220-mm MLRS ‘Uragan’ of the Western Military District struck at the identified enemy positions.”

Zenger News has not been able to independently verify the footage or the claims.

President Joe Biden has promised Kyiv another one billion dollars in security assistance and weapons. And General Mark Milley, who chairs the Joint Chiefs of Staff, says Russia has lost around 20 to 30 percent of its armored force during the ongoing invasion.