Baby On Board: British Couple Trapped In Greece After Baby’s Surprise Early Arrival

Robyn Bishop, 29, was 29 weeks pregnant, and had been signed off as fit to fly by her doctor.
By Darko Manevski June 21, 2022
Facebook
Twitter
Linkedin
Email 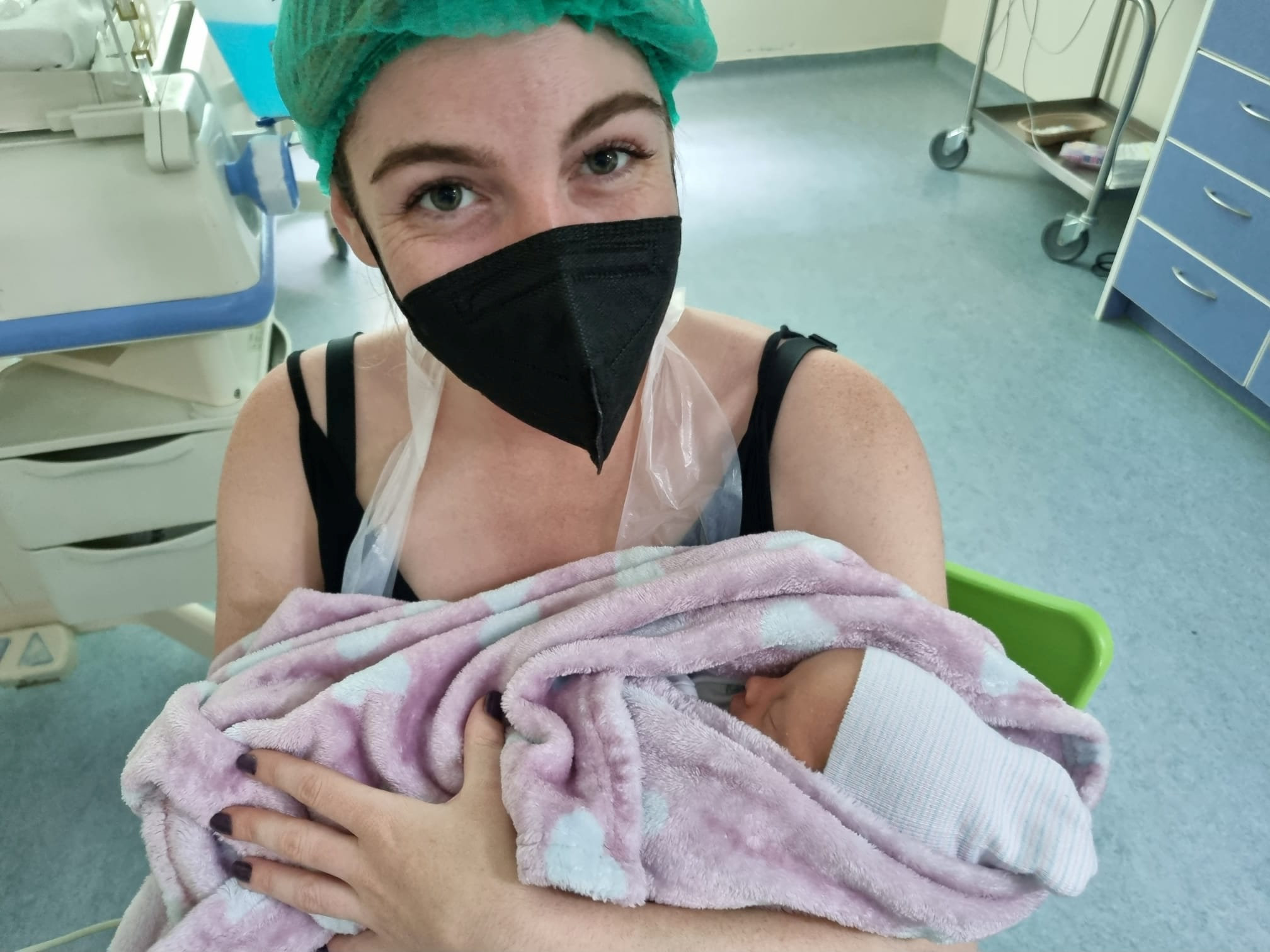 A pregnant woman who jetted off on a 'babymoon' before the birth of her first child was trapped in Greece - after her daughter made a surprise early arrival. (Robyn Bishop/Zenger)

A pregnant woman who jetted off on a ‘babymoon’ before the birth of her first child was trapped in Greece – after her daughter made a surprise early arrival.

Robyn Bishop, 29, flew to Greece’s Aegean island of Crete with partner Stephen Howe, 32, for a luxurious stay at a five-star adults-only resort in April 2022.

The mother-to-be was 29 weeks pregnant, and had been signed off as fit to fly by her doctor.

She was declared too premature to fly by their insurance company.

The trio finally landed back in the UK on June 8 after two MONTHS abroad via a medical repatriation flight.

“I’m a first-time mom with a premature baby and we were just stuck out there in another country with no help, it’s been so difficult.

“We were calling the insurance company seven times a day, just trying to find a way back to the UK. We were desperate to get home.

“I’m just so relieved that Flora is here safe and sound. It was unlikely I could have children easily naturally due to having PCOS, so she is certainly my miracle baby!

“I’m extremely happy she’s finally here. I couldn’t wait for her to come – and it turns out, neither could she!”

With their first child together due on June 24, Robyn and Stephen, who is the director of a painting and decorating company, had jetted off on a ‘babymoon’ in Greece.

Robyn said: “We actually booked our holiday before we got pregnant and then decided to use it as a babymoon as I’d still be safe to fly.

“We had been struggling with the idea of having a baby and the realities of it.

“We were pretty rocky as a relationship and had hoped some time, just the two of us, without life’s stresses would give us an opportunity to reconnect before our baby arrived.”

Robyn visited her doctor in April 2022 where she was declared fit to fly and set off with Stephen, five days later on April 17.

The peace of their last holiday without a baby was soon disturbed, however, when Robyn’s waters broke as she sat down on a chair on the hotel room balcony on the second day of their trip.

She was rushed to Venizeleio Hospital in Heraklion by ambulance, where medical staff administered medication to try and stop the contractions and halt the premature labor.

Despite the doctor’s attempts at delaying the birth, Robyn and Stephen’s child was in no mood to wait and baby Flora was born a few weeks later on May 13 via cesarean.

With her original plan to give birth in her local hospital back in Northampton, Robyn found the experience of having her baby six weeks prematurely in another country extremely difficult and traumatizing.

Robyn said: “Nobody spoke any English and they weren’t explaining what they were doing so I was just having drugs pumped into me without knowing what medication it was.

“After the C-section, I woke up to no baby. I didn’t see Flora for two days, and then only saw her once a week.

“I was in hospital for four weeks and we only saw her four times and were allowed to touch her twice. It was horrible.”

After being discharged from the hospital last month, Robyn, Stephen and baby Flora were left trapped in Greece and are struggling to get back to the UK.

Robyn claims that their medical insurance company, Mayday, had originally stated that premature Flora was unfit to fly due to arriving six weeks early.

The new mother claims that Mayday did offer an ambulance to take them back to the UK but says that doctors advised against the four-day trip with a premature baby.

The family were stuck in Greece for eight weeks and had to change accommodation four times, spending a whopping 5,000 British pounds ($6,100) on finding a place to stay.

Dad Stephen said: “It’s been such a difficult journey.

“The medical insurance company were making financial decisions that they were putting above the health of our baby.

“They were doing everything they could to keep us there instead of paying out for our medical repatriation home which is what is on our policy and what we had paid for!”

Robyn said: “I’m so traumatized by the whole experience.

“I have PTSD from everything that has happened and I’m so frightened of pain that I have a breakdown every time I have to change my dressing.

“I’m a first-time mom with a premature baby and we were just stuck out there in another country with no help, it’s been so difficult.

“Only time will tell how this will leave us – we’re still going through it and have both experienced our own traumas throughout. We’re still learning how to communicate and share these experiences.”

Thankfully, Mayday managed to put the family on a medical repatriation flight last week and they are now finally back on British soil.

Prior to the flight, a spokesperson for Staysure Insurance, who use Mayday as their global assistance company for customers, said: “Our priority is to ensure that baby Flora gets the best care possible, which is why we have been closely liaising with our medical team on the ground, and the doctors at the hospital, to discuss the safest way to get the family back home to the UK.

“Various options were explored, including transfer by road ambulance with a specialized medical team, however, despite the doctors declaring baby Flora fit to fly home on a commercial flight, Mayday, our 24/7 global assistance company, overruled the decision and instead have arranged her transfer by air ambulance, to ensure the safest and most comfortable journey home for them all.

“We’re pleased to say that an air ambulance is scheduled for tomorrow morning [June 8] for repatriation. The family have been contacted with final arrangements and we look forward to welcoming them home.

“Staysure always strive to deliver the best travel insurance so our customers can travel confidently knowing we’re there for them when they need us.”

Although still dealing with the trauma of their rocky start to family life, Robyn and Stephen are pleased to be back and are settling in with Flora at home.

Robyn said: “The journey honestly was a dream.

“The ambulance crew came to the apartment and checked her vital signs to ensure she was fit to fly.

“They went through some questions about her birth, treatment following it and my pregnancy and they then put her in the pod and into the ambulance.

“We were put in a taxi and we all went to the consulate to pick up her passport. From there, we drove to the airport and went through the crew security and straight onto the plane.

“The paramedics were incredible and instructed us to go to sleep if we could and they’d handle any feeds/nappies. It took just over four hours and we were in Luton.

“Flora slept the whole way, only waking for a feed. She was hooked up to a heart rate monitor where they tracked her [oxygen] levels and was strapped into a cozy pod.

“When we landed, she went in an ambulance and us in a taxi to my mom’s address where we were all finally reunited with family!

“I’m just so relieved that Flora is here safe and sound. Although I’m certainly suffering with some post-partum depression, it was unlikely I could have children easily naturally due to having PCOS, so she is certainly my miracle baby!

“I’m extremely happy she’s finally here. I couldn’t wait for her to come – and it turns out, neither could she!”