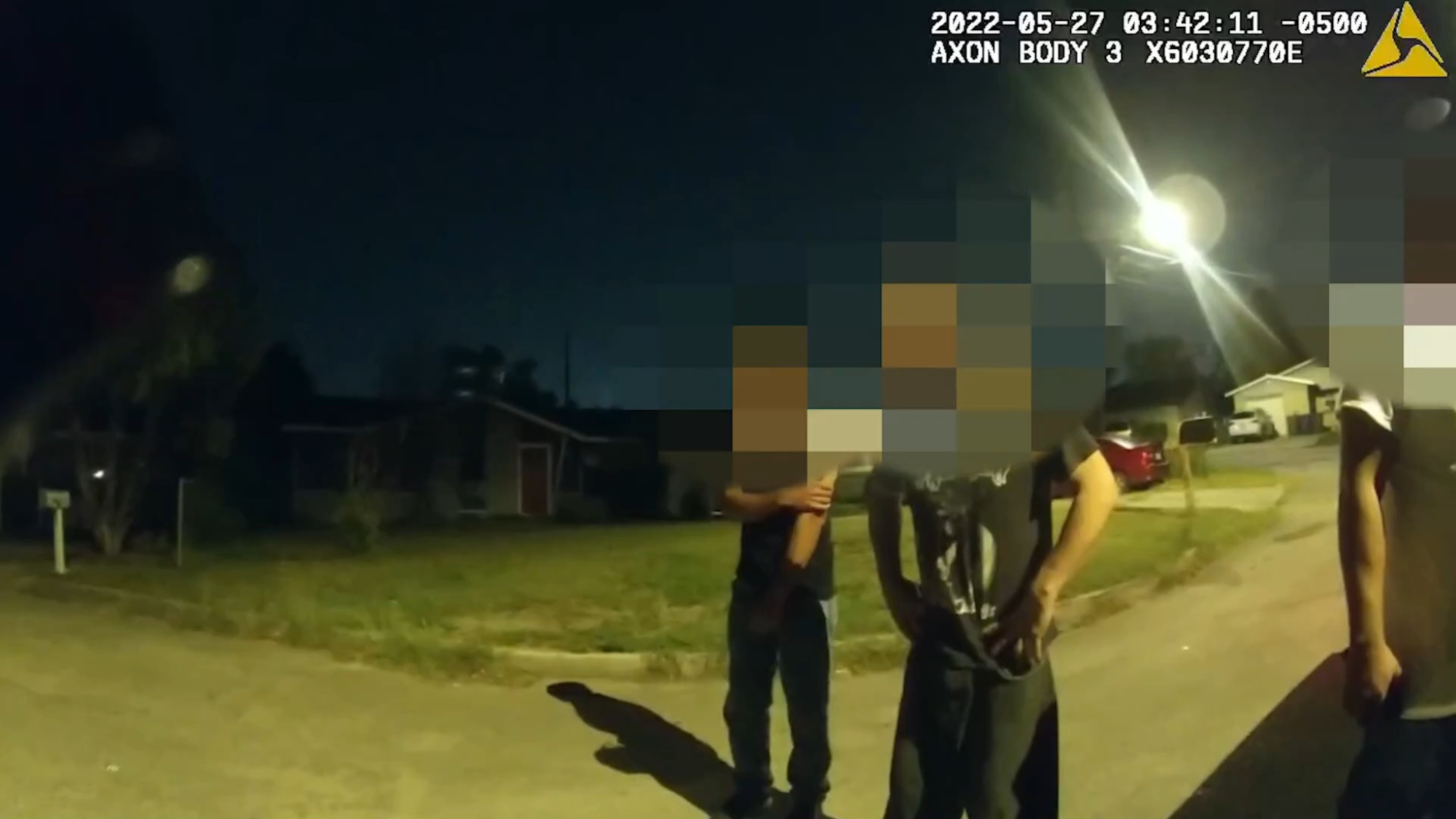 SAPD Officer's bodycam showing three men that heard the gunshots in the backyard of their home, on May 27, in San Antonio, Texas. (San Antonio Police Department/Zenger)

Texas police have been involved in two bloody shootings less than 24 hours apart and just a few days after the Uvalde school slaughter.

The first incident involved a man who opened fire on officers as they entered his home.

The officers returned fire hitting the suspect on his legs before taking him into custody.

In bodycam footage, the suspect – named as Japheth Perea, 43 – can be heard saying: “Please, please, I don’t have a gun. Oh my god.”

The second piece of footage, filmed a few hours later, involved police responding to reports of an intoxicated man, named as Roger Flores, 29.

He then allegedly pointed a gun at an officer causing a SWAT officer to open fire.

He was also injured and taken into custody.

“SAPD Officers responded to the 8800 block of Topsey Street for a report of shots fired. Officers arrived and contacted the homeowners who reported that the male who lived behind the house, identified as 43-year-old Japheth Perea, had been the one shooting.

“Officers talked to the homeowners, and, with their consent, went inside to ensure that the house was clear.

“As the officers worked to clear the house, the suspect opened fire on them. One officer returned fire and struck the suspect.

“The suspect surrendered a short time later and was transported to the hospital and treated for his injuries.

“The suspect has been charged with two counts of Aggravated Assault of a Public Servant.”

They said: “The second occurred in the 1200 block of Ada Street just before 1 a.m. on May 28. Officers responded to a report of an intoxicated male shooting a gun.

“Officers located the suspect, Roger Flores, 29, at the intersection of Ada and Goliad Road. Flores was armed with a handgun.

“Officers set up a perimeter for the safety of the suspect and the neighborhood residents.

“Officers attempted to de-escalate and negotiate with Flores for over two hours, but he refused to put his weapon down.

“At one point during the negotiations, Flores raised his weapon in the direction of officers on the perimeter.

“A SWAT officer fired one round, striking Flores. He was taken into custody and treated for his injuries. He has been charged with one count of Aggravated Assault of a Public Servant.

“As with all officer-involved shootings, the District Attorney’s Office is investigating each incident.

“Background information on the Department’s updated Body-Worn Camera Procedure: The San Antonio Police Department updated its Body-Worn Camera Department Procedure in December 2020 to release portions of videos and 911 calls related to critical incidents involving officer-involved shootings or use of force resulting in death of an individual.

“The release of information is balanced with other sound public policy objectives including privacy and due process. Videos related to domestic violence will not be released unless the Police Chief believes that the release will serve a law enforcement purpose.”

San Antonio is located just 80 miles east of the city of Uvalde, where 18-year-old Salvador Ramos killed 19 students and two teachers, and wounded 17 other people at the Robb Elementary School, on Tuesday, May 24

The incident has led to gun laws in the United States coming to the fore of the political discussion, with Senators from both sides of the aisle reaching a deal on gun control last Sunday.

The bipartisan group of Senators announced that they had reached an agreement on tightening gun control laws in the country.