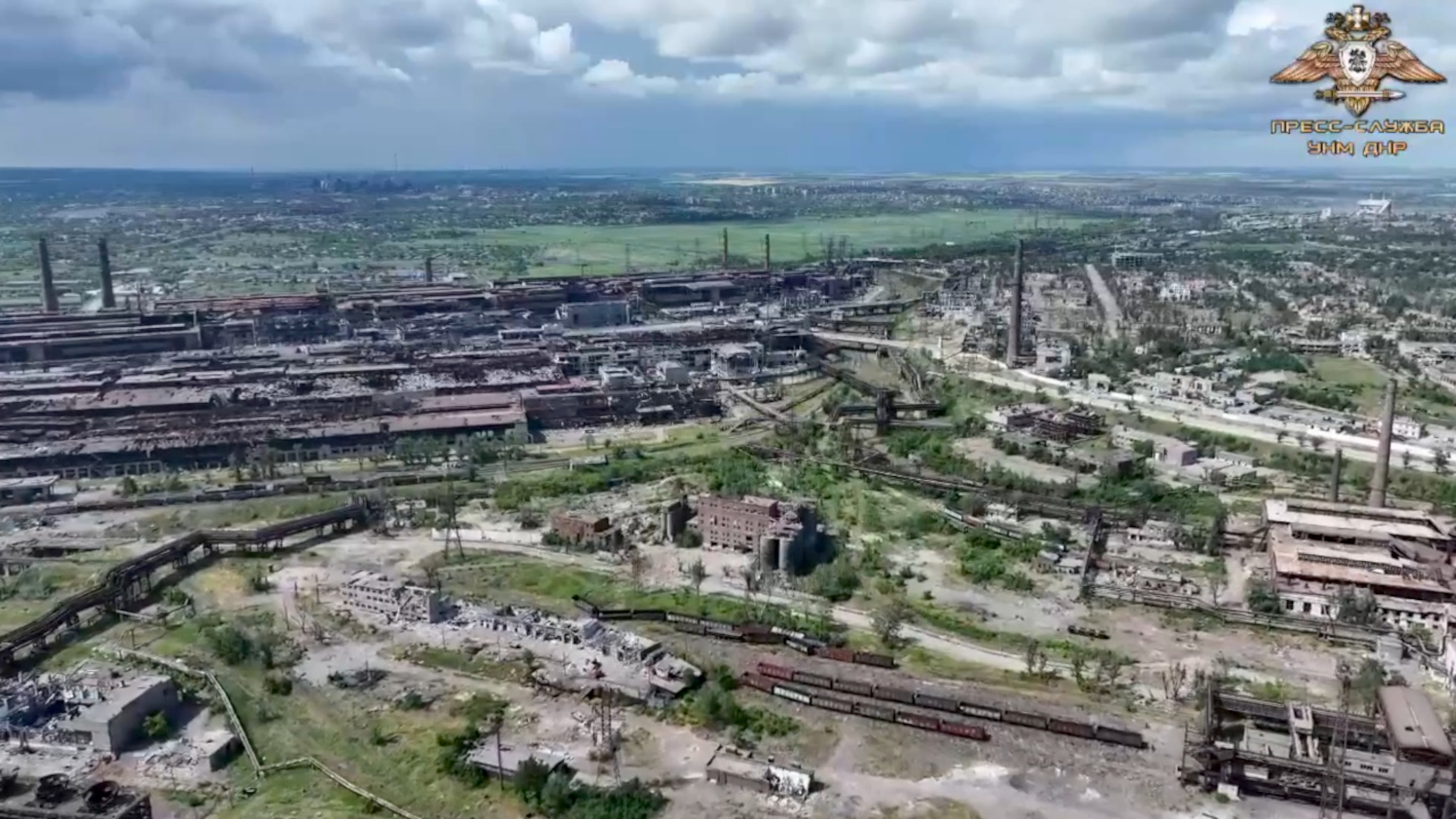 Parts of shelled AzovStal plant, how it looks now in June, 2022 in Mariupol, Ukraine. (@unmdnr/Zenger)

The pro-Russian Donetsk People’s Republic has shown what the Azovstal iron and steel works look like now, one month after the surrender of Ukraine’s Azov fighters who had been entrenched there.

The so-called Donetsk People’s Republic (DPR) released these images on Thursday, June 16, marking the one-month anniversary of the surrender of the Azov Battalion fighters to Russian forces on May 16 in the final days of the Siege of Mariupol.

The images begin by showing the severely damaged facility from the outside, with concrete and bent metal debris strewn across the ground.

Buildings that appear to have been hit by missiles can be seen with their roofs ripped apart. The footage then appears to show the inside of the plant, with clothes and personal belongings left near bunk beds by those who took shelter in its network of tunnels.

A map of the facility can be seen lying on a table near a children’s book.

Soldiers can be seen checking the area, with rubble and bent metal sheets littering the outside areas, where a destroyed military vehicle can also be seen.

A final aerial view of the steelworks, a bastion of resistance against the Russian invasion, is shown before the footage ends.

The Azov Regiment, also known as the Azov Battalion, is a notorious group of soldiers officially incorporated into the National Guard of Ukraine in 2014 after recapturing Mariupol from pro-Russian separatists in June of that year.

The Azov Regiment is said to have begun as a far-right, neo-Nazi group that started as an urban militia and a political party. It has since expanded and, through service to Ukraine, has been incorporated into the Armed Forces. Azov, on a national level, failed in past elections to win any seats in the Ukrainian parliament via its political branch.

Azov was originally a paramilitary militia known as the “men in black.” Its integration into Ukraine’s National Guard and the recruitment of many soldiers who were unaffiliated politically is said to have marginalized its most extreme elements and it is now often described by Western military experts as being “anti-Russian” and “ultranationalist.”

The People’s Militia of the DPR issued a short statement along with the footage, claiming: “Azov’s militants hid and held hostage residents of Mariupol on the territory of the Azovstal plant for more than two months and fired at the city from firing points from its territory. Now only mines and mountains of rubbish remain.”

Another soldier said: “At this stage, we are clearing mines, checking all the premises, underground tunnels, perimeter security.

“After the surrender of the main forces of Azov, people still sometimes came out here, they were met and sent for verification, maybe they could be civilians, and possibly military people.

“Under the onslaught of the forces of our military, in order not to suffer heavy losses, I think Azov did the right thing by surrendering.”

We have not been able to verify these claims independently.

Russia invaded Ukraine on February 24 in what the Kremlin is calling a “special military operation” to “liberate the Donbas.” Today marks the 113th day of the invasion.

In related news, French President Emmanuel Macron, German Chancellor Olaf Scholz, and Italian Prime Minister Mario Draghi arrived in Kyiv to conduct talks with Ukrainian President Volodymyr Zelenskyy. They are hoping to rebut what has been perceived as their lukewarm support for Ukraine.

United States President Joe Biden has promised Kyiv another billion dollars in security assistance and weapons. And General Mark Milley says Russia has lost around 20 to 30 percent of its armored forces during the ongoing invasion.