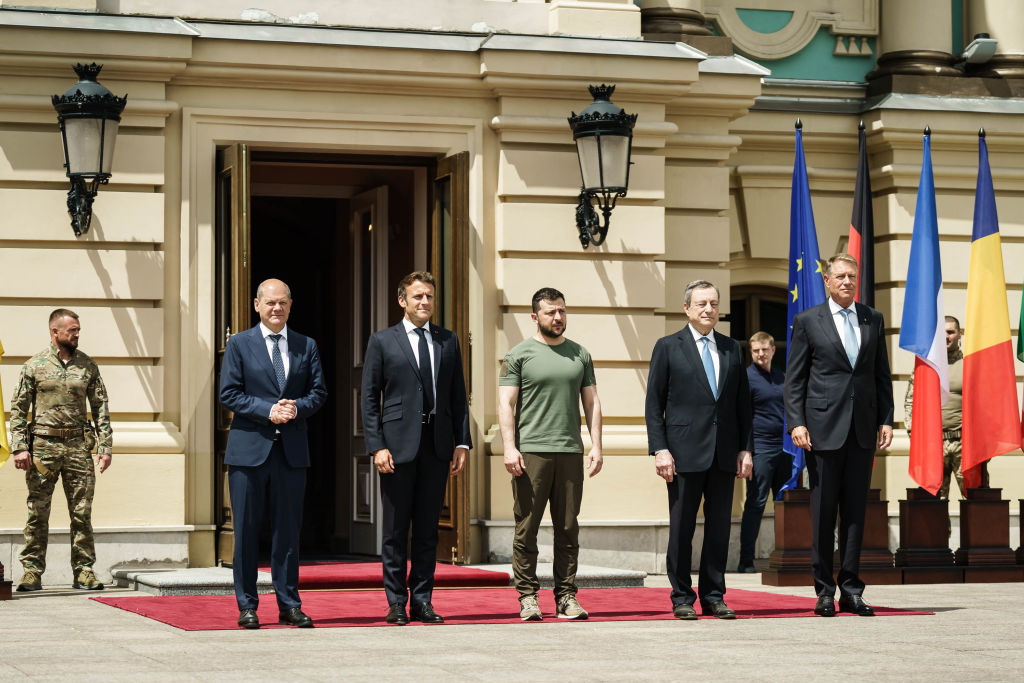 In this handout photo provided by the German Government Press Office (BPA), German Chancellor Olaf Scholz (L) stands in front of the Presidential Palace next to Emmanuel Macron, President of France, Volodymyr Selensky, President of Ukraine, Mario Draghi, Prime Minister of Italy, and Klaus Johannis, President of Romania on June 16, 2022 in Kyiv, Ukraine. Photo by Jesco Denzel/Bundesregierung via Getty Images)

Along with the president of Romania, Klaus Iohannis, they took the opportunity to announce that they were backing giving Ukraine candidate status in view of becoming a member of the European Union (EU).

This prompted Medvedev, a strong ally of Russian President Vladimir Putin, and who served as the president of Russia from 2008 to 2012 and as its prime minister from 2012 to 2020, to say on Twitter: “European fans of frogs, liverwurst, and spaghetti love visiting Kiev.

“With zero use. Promised EU membership and old howitzers to Ukraine, lushed up on gorilka and went home by train, like 100 years ago. All is well. Yet, it won’t bring Ukraine closer to peace. The clock’s ticking”.

Macron, Scholz, and Draghi, representing the leaders of the EU’s three largest economies, were given a tour of Irpin, a suburb of the Ukrainian capital where atrocities were allegedly carried out by Russian troops – an accusation Moscow disputes – before sitting down for talks with President Zelenskyy of Ukraine.

Romanian leader Klaus Lohannis was also present, in Kyiv’s presidential Mariinsky Palace. In a joint press conference, French President Macron said: “All four of us support the status of immediate candidate for accession [to the EU]”.

Macron also said: “Irpin in Ukraine. We saw the devastated city and the stigmata of barbarism. And the heroism, too, of the Ukrainians who stopped the Russian army as it descended on Kyiv. Ukraine resists. She must be able to win.”

Chancellor Scholz said: “Like Butscha , Irpin has long since become a symbol for the unimaginable cruelty of the Russian war, for senseless violence. The brutal destruction in this city is a memorial – this war must end.”

While President of Romania Klaus Iohannis said: “No words to describe the unimaginable human tragedy and horrible destructions we saw today in Irpin. I strongly renew my appeal for all Russian perpetrators to be held responsible by the international criminal justice, which Romania fully supports.”

On June 8, the European Parliament adopted a resolution recommending that the European Union grant Ukraine the status of candidate country for EU membership. In the balloting, 438 members of the parliament voted in favor of the resolution, with 65 voting against and 94 abstaining.

Russia invaded Ukraine on February 24 in what the Kremlin is calling a “special military operation” to “liberate the Donbas”. June 17 marks the 114th day of the invasion.