Lord Of The Rinks: One Of Canada’s Hockey Heroes Was Also A Catholic Priest 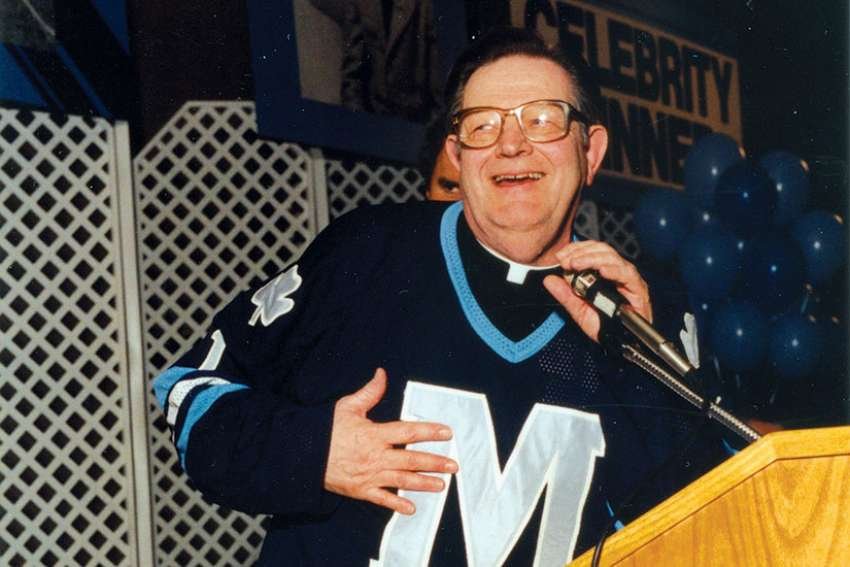 Strolling the bright halls of the Hockey Hall of Fame in Toronto offers a real education into the lives of some impressive athletes and coaches.

Gordie Howe, known as “Mr. Hockey,” the sport’s best player starting in the 1960s, and Wayne Gretzky, nicknamed “The Great One” after rewriting the National Hockey League record books in the ‘90s, are prominently featured throughout much of the 60,000-square-foot building.

As millions across the world enjoy the Stanley Cup Playoffs that will ultimately crown an NHL champion this month, the Hockey Hall of Fame takes on an even bigger meaning for visitors.  Jerseys and pucks from NHL yesteryear aren’t the only things on display. The place is a temple to not just the North American game but the international one as well, including the Winter Olympics. Many of the 417 men and women inducted into the hall took part in the Olympics.

One of those inductees, David Bauer, coached Canada’s men’s ice hockey team at the 1964 Winter Games held in the Austrian city of Innsbruck. Largely credited with creating the first truly national Canadian hockey team, Bauer’s collection of amateurs was up against the Soviet Union and its domination of the international game at that time. For a nation where hockey is the No. 1 sport, Bauer’s legacy is truly great. An educator and Catholic priest, Bauer was a pioneer and remains a Canadian icon admired to this day.

Bauer, who died of cancer in 1988 at age 64, was born nearly 100 years ago in 1924, about 60 miles southwest of Toronto in the town of Waterloo. Bauer’s older brother, Bobby, who died in 1964, had helped the Boston Bruins win the Stanley Cup in 1939 and 1941. David Bauer also played hockey and was a member of the Oshawa Generals, winning the 1945 Memorial Cup, Canada’s premier junior hockey championship. A year later, he decided to become a priest and entered the seminary of the Basilian Fathers.

The Basilian Fathers — also known as the Congregation of Saint Basil — were founded in France in 1822. They came to Canada in 1850 and founded St. Michael’s College two years later. Ordained in 1953, Bauer became a teacher and hockey coach at the school, coaching the team to the Memorial Cup in 1961.  He later was the coach at St. Mark’s College at the University of British Columbia.

As a coach, Bauer always tried to put his players at ease — even when a player took the Lord’s name in vain during a game.

“The fact that father was a Basilian priest — he used to worry about that a lot, that people would misinterpret that he was trying to turn everyone into a Catholic,” Rick Noonan, a friend of Bauer’s, told The Catholic Register. “But really, he was very ecumenical. And you look at some of his teams, the year we won the Memorial Cup, there were more non-Catholics than Catholics. They all loved him equally.”

Creating a team that represented all of Canada

Bauer’s biggest accomplishment came in 1963, when he made it part of his mission to find talent from the country’s 10 provinces to represent Team Canada. Prior to that, the senior amateur club teams representing Canada in international competitions were typically the most recent Allan Cup champions, dating to 1920.

“I know a lot of people have scoffed at us, particularly in Toronto,” Bauer told reporters, according to the 2017 book “Father Bauer and the Great Experiment: The Genesis of Canadian Olympic Hockey” by writer Greg Oliver. “But these boys are dedicated and patriotic. They’re working hard because they feel it’s an honor to represent their country.”

The tournament featured national senior amateur men’s ice hockey teams from across Canada, including Brian Conacher, who would go on to play for the Toronto Maple Leafs and Detroit Red Wings. He remembers his former coach fondly.

“He was an inspirational man. He was a great teacher,” Conacher said. “He was also a very good hockey man. He was good enough that he could have played at a high level. But it was a wonderful experience to be couched by him.”

Success and controversy at the ‘64 Olympics

Once in Innsbruck after a tour of Europe to play exhibition games, the Canadian team nicknamed “The Nats” impressed at the Olympics. Canada posted a win against Sweden in a game that remains the stuff of legend among hockey fans.

Oliver recalled the game this way: “A memorable 3-1 victory over Sweden drew blood. Conacher was cut on the forehead in the first period, but he stayed in the game. His coach was next to bleed, hit on the forehead above his right eye by an errant broken stick tossed away by Carl-Goran Oberg; no penalty was called, but if Bauer hadn’t acted the protective Father and kept his incensed players on the bench, there could have been a brawl. Swedish captain Tumba Johansson skated over to apologize for the accident and was told, ‘That’s okay.’ Oberg was forgiven by Bauer as well and was his guest the next day for the Czech-USSR tilt.”

Canada would finish fourth at those Olympics — just missing the medal podium after a 3-2 defeat to the USSR on the final day to go 5-2-0. The sight of Bauer clad in black pants and matching black shirt, punctuated by a white priest’s collar when facing the Soviets — at the time representatives of a communist nation — certainly would have sent a silent message.

However, a different sort of controversy dogged the tournament finale. Canada’s team, which thought it had done enough to take the bronze, missed out on a medal because it had scored fewer goals than Czechoslovakia after goal differential against all seven opponents, not just among those in the top four.

The change in the goal differential angered the Canadians, who had not run up the score against Switzerland earlier in the tournament in an act of mercy.

Marshall Johnston, who would go on to be the general manager of the NHL’s Ottawa Senators, put it best at the time: “The shepherd and his flock have been fleeced.”

It was that sportsmanlike gesture, something that exemplified Bauer’s coaching style, that came to haunt Canada in the end. The National Post, in a 2018 article looking back at those Olympics, referred to it as a “last-minute flurry of hockey/backroom dealing/diplomatic chicanery that deprived the first-ever edition of the Canadian national hockey team of a medal at the Innsbruck Games.”

“Everyone played hard that day,” Conacher recalled. “We showed everyone we were competitive. We were robbed.”

The USSR was a magnificent team during that era, largely because the “amateurs” who made up its roster were mostly paid members of the military who had their normal work duties waived so they could play hockey full time. The USSR team featured pros who masqueraded as amateurs. It was a practice employed by the communist government for decades that certainly gave its ice hockey program an edge. The practice ended in the early 1990s with the dissolution of the Soviet Union.

The Soviets finished undefeated to take gold in 1964. Nonetheless, Bauer’s vision would forever change the way Canada was represented in international tournaments. After those Winter Games, the team toured Europe, a trip highlighted by an audience with Pope Paul VI at the Vatican.

Bauer, who opposed the growing professionalism in the amateur game, later transitioned into serving as the national team’s manager. He oversaw Canada’s run to the bronze medal at the 1966 and 1967 World Championships and the 1968 Winter Olympics in the French city of Grenoble. He later served as manager of Team Canada, which finished sixth at the 1980 Winter Olympics in Lake Placid, New York.

Bauer eventually became an international hockey ambassador, teaching the game in Japan with a focus on personal growth and discipline. He also coached Austria’s national hockey team at the 1973 Ice Hockey World Championships, where they finished in 11th place.

Bauer’s legacy lives on — and not just in those who remember him. This past February, St. Mark’s College and Corpus Christi College — both in British Columbia — announced the Father David Bauer Award for Athletic Excellence, which will award $1,000 annually to a student at either college.

Aside from the Hockey Hall of Fame, Bauer was also inducted into Canada’s Sports Hall of Fame, the International Ice Hockey Federation Hall of Fame and the Ontario Sports Hall of Fame. A 1,750-seat arena in Calgary is known as the Father David Bauer Olympic Arena, yet another reminder to visitors of the tremendous impact he had on the sport in Canada and the world.

Clemente Lisi is a senior editor and regular contributor to Religion Unplugged. He is the former deputy head of news at the New York Daily News and teaches journalism at The King’s College in New York City.