“The seabirds were rescued between the end of February and the third week of April in different locations.”
By Joseph Golder June 20, 2022
Facebook
Twitter
Linkedin
Email 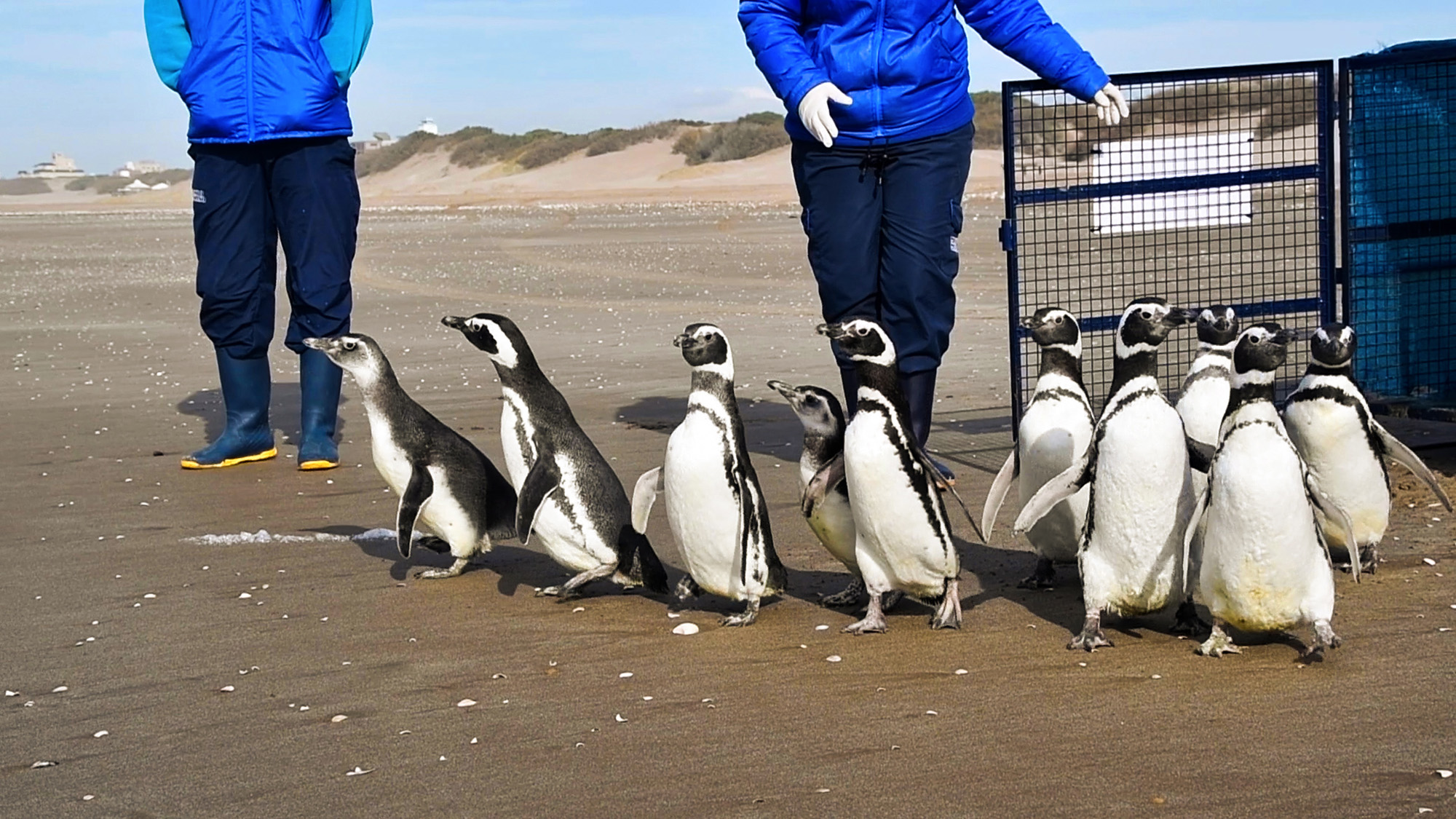 12 Magellanic penguins (Spheniscus magellanicus) rescued in different locations in Argentina and rehabilitated at the Mundo Marino Foundation due to malnutrition, dehydration, high parasite load and, in some cases, hypothermia returned to the sea at the San Clemente del Tuyu beach, on 16th June, 2022. (Mundo Marino/Zenger)

These touching images show how 12 rescued penguins have been released back into the sea after they were found malnourished and dehydrated.

Zenger obtained a statement from the Mundo Marino Foundation on Thursday, June 16, that said that the 12 Magellanic penguins (Spheniscus magellanicus) had been returned to the sea together because it increased their chances of survival and of being able to continue their migration.

The release took place on the beaches of San Clemente del Tuyu, on Argentina’s Atlantic coast, on the morning of Wednesday, June 15.

Mundo Marino operates in San Clemente, where it also runs the largest aquarium in Argentina.

The heartwarming images show some of the penguins being rescued before they are treated by animal protection organizations.

The Magellanic penguins can then be seen being given checkups and recovering at the Mundo Marino’s facilities, under the watchful of the foundation’s workers before they are taken to a beach and released from a cage onto the sand.

The seabirds can then be seen tentatively waddling into the ocean, encouraged by their human carers.

A young girl can be seen adorably waving goodbye as the penguins make their way out into the Atlantic Ocean.

The Mundo Marino Foundation said: “The seabirds were rescued between the end of February and the third week of April in different locations in the Partido de la Costa and in the cities of Pinamar, Villa Gesell and Reta, a seaside resort in the Partido de Tres Arroyos.”

Sergio Rodriguez Heredia, a biologist and the head of the Mundo Marino Foundation Rescue Centre, said: “All these animals that we were able to reinsert were rescued with a type of condition that we see very frequently in this species and that is called the stranded penguin syndrome: these are animals that appear alone, skinny, dehydrated, with parasites, anemic and hypothermic.”

He added: “As with other marine species, these animals absorb water through the fish, so if they do not find food, they become dehydrated.

“Furthermore, in some cases, an abnormal change in their plumage was added into the mix due to a generalised metabolic imbalance.”

Juan Pablo Loureiro, a veterinarian and the technical director of the Mundo Marino Foundation, said: “First, once they arrive at the rescue center, a stabilization therapy whose objective is to mitigate the negative effects of the condition takes place.

“This is achieved through hydration with fluid therapy and thermal therapy with heat.

“Once stabilized, we proceed to take blood and feces samples, and help them regain their weight with liquefied fish formulas until finally they are given whole fish.”

The Mundo Marino statement also said: “It is important to keep in mind that this species has gregarious habits, so it is necessary to form a group with a minimum number of individuals so that the reinsertion is successful and that group resumes its migratory route.”

The foundation explained that before they can be given the green light and returned to the wild, “a second blood sample is taken, the impermeability of their feathers, their body condition, and behavioural attitudes are verified, in addition to recording their morphometric measurements.”

Loureiro added: “One or two days before reinsertion, we put a subcutaneous microchip in the dorsal area.

“Thanks to a reader, this microchip has a code which is associated with the medical record number that the animal had during its rehabilitation in our center.

“If it appears in another geographical location, with a reader, they will be able to determine that this animal was in a rescue centre.”

The statement also explained: “Their reproductive cycle takes place between September and March. After this stage, they change their plumage and begin their migratory journey between the end of March and the beginning of April, which can reach the latitude of Rio de Janeiro.

“During that annual trip of about 6 months, they can cover a total of 3,100 miles.

“As for their food, their diet consists of fish such as anchovies, sardines and hake; mollusks, such as squid, and crustaceans, such as shrimp.

“The migratory journey is related to the seasonal movement carried out by the anchovy, one of its main prey, which during our winter, after having migrated from our Patagonia, spawn on the coast of Brazil.”