''I never thought we would get to this, it’s just one of those things, it seems as though Fred has been around forever.”
By Darko Manevski June 20, 2022
Facebook
Twitter
Linkedin
Email 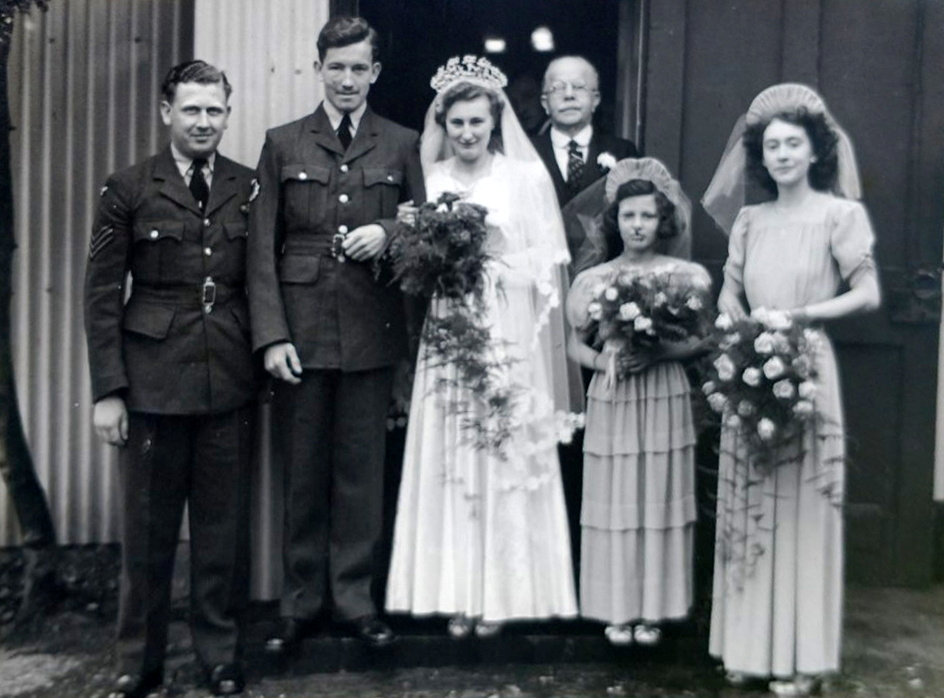 Childhood sweethearts who met at primary school have celebrated their 75th wedding anniversary.

Ruth and Fred Standford, both 96, got together at a 16th birthday party – and have been together ever since.

The couple celebrated their anniversary with family and friends at Barchester White Lodge Care Home, in Braydon, Wiltshire, England.

Asked about the secret to a long marriage, Ruth said: “I have not got a clue!

”I never thought we would get to this, it’s just one of those things, it seems as though Fred has been around forever.”

Fred and Ruth received a card from the Queen, a bouquet of flowers, and lapel pins from Royal Wootton Bassett mayor Pat Farrow, and an aircraft photo from Master Air Crew Brian Kayll and Seargent Isla Cudlipp at the Royal Air Force (RAF) base at Brize Norton.

After attending St. Luke’s Primary School, in Guildford, Surrey, – where the couple first met – Fred joined the RAF at just 17 and was away on active service in World War II.

He flew Lancaster Bombers, was based at Butterworth and piloted 37 types of aircraft during the war.

His service in the RAF even took the family to the Far East, where the couple lived with their three children for many years.

The remarkable solider stayed in the RAF until his retirement at 65 and was the longest serving officer to keep up his flying hours when he retired, and was seen on the day decorated in his many medals.

Ruth and Fred have three grandchildren and two great-grandchildren – and their son, Gordon and daughter, Christine visited their parents on the special day.

Christine said: “Mom is feisty with a lovely spirit and dad was a great partygoer in his youth.

”They looked after us well. We had good fun as kids and traveled around the world because of dad’s work. We lived in Singapore for a few years.

“They’ve really made the most of their retirement and went on amazing holidays sightseeing around Europe, they’ve had an adventurous life.”

Gordon remembered his father saying about the RAF: “If someone gave you the best toys in the world to play with and paid you to do it, of course you’d sign up.”

He added: “I remember a lot of laughter at home with them. Dad was very commanding and focused and took charge – his career is testament to that – but it was always done with a lot of humor and he was willing to laugh at himself and admit when he got things wrong.

“He never knew his limitations and achieved everything he wanted to do – even after he retired, he didn’t stop.

“He rebuilt the garage, the front extension, and a classic car all by himself.

“Mom took us to Singapore on her own to meet him when we moved – it took three days back then, it was a different world – and she was always doing the shopping, cooking, and cleaning.

“Mom and Dad were always there for us, with financial or emotional support.

“They don’t think there’s a big secret to a happy marriage, just care and respect and regard.”

Ruth was chair of the Bassett Women’s Institute for many years and Fred was one of the founders of the town’s Otters swimming club.

Ruth said: “This was a lovely day – even better than the wedding!

“The care home has done wonderfully well, I’m not sure we deserve it all, though I know it’s amazing to have been married for such a long time.”

Fred and Ruth have been invited to Buckingham Palace for their Golden Wedding Anniversary alongside all the other couples married in 1947 to celebrate with the Queen and Prince Phillip.