Zenger News obtained the video from the Ministry of Defense (MoD) of the Russian Federation on June 15.
By William McGee June 17, 2022
Facebook
Twitter
Linkedin
Email 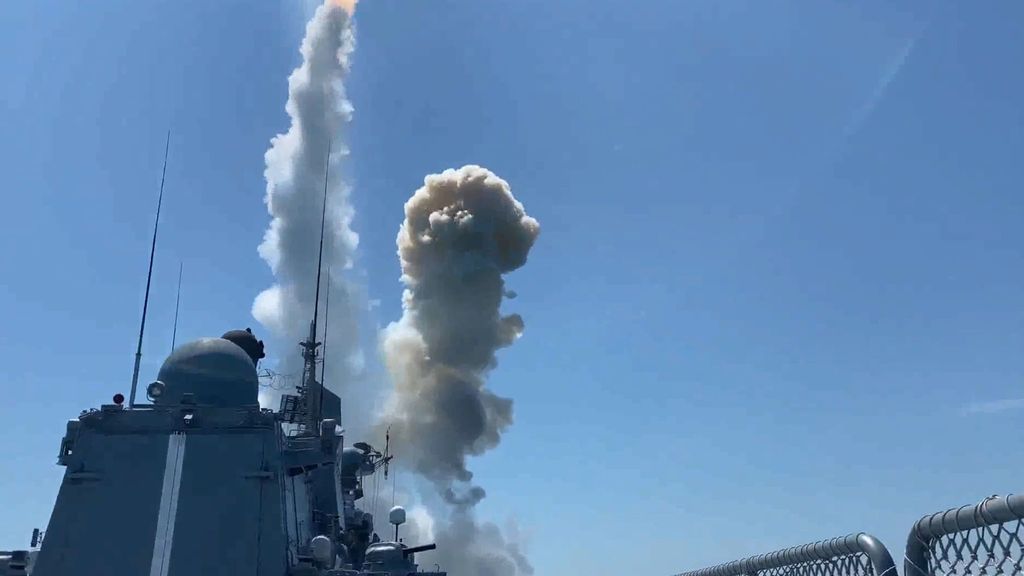 Launch of four Kalibr cruise missiles at military infrastructure facilities of the Armed Forces of Ukraine. (Ministry of Defense of Russia/Zenger)

This footage purports to show a Russian frigate launching a salvo of cruise missiles from its position in the Black Sea towards military targets in Ukraine.

Zenger News obtained the video from the Ministry of Defense (MoD) of the Russian Federation on June 15.

The Russian MoD said: “The crew of the frigate of the Black Sea Fleet from the Black Sea carried out a salvo launch of four Caliber cruise missiles at the military infrastructure of the Armed Forces of Ukraine.”

The 3M-54 Kalibr (Caliber) is a family of Russian cruise missiles developed by the Novator Design Bureau. There are ship-launched, submarine-launched and air-launched versions of the missile, which entered service in 1994.

The Russian MoD did not specify if the missiles hit their intended targets or where in Ukraine they were located.

In its latest briefing, the Russian MoD said that from February 24 to June 15, “203 Ukrainian airplanes and 131 helicopters, 1,211 unmanned aerial vehicles, 339 anti-aircraft missile systems, 3,558 tanks and other armored combat vehicles, 524 multiple launch rocket systems [MLRS}, 1,958 field artillery and mortars, as well as 3,623 units of special military vehicles were destroyed during the operation”.

Russian forces now control most of Sievierodonetsk after a month of intense combat, according to UK military intelligence.