The Switchblade 300 is an American-built, expendable, 'kamikaze' drone that is used by several branches of the US military.
By Joseph Golder June 17, 2022
Facebook
Twitter
Linkedin
Email 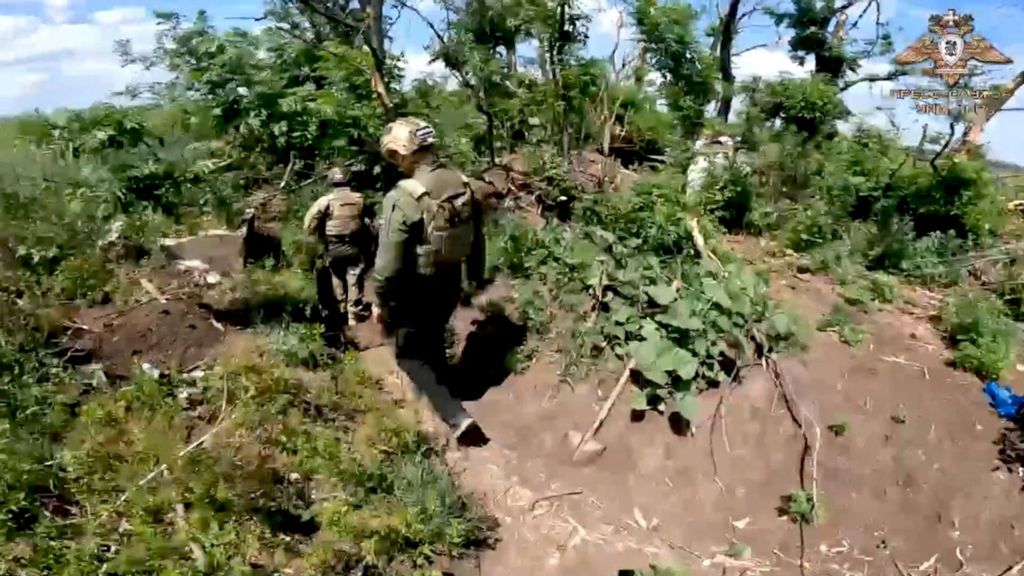 Soldiers of the PM DPR, together with the RF Armed Forces, continue to destroy the firing points of the Armed Forces of Ukraine in the Avdiivka direction, Ukraine.  (@nm_dnr/Zenger)

The pro-Russian DPR has said that Ukraine has resorted to using American-made “kamikaze drones” because the “American artillery” being provided by their allies is in short supply.

These images, obtained from the so-called Donetsk People’s Republic (DPR) on Wednesday, June 15, show military and trench warfare operations in eastern Ukraine, before a soldier speaks about American “kamikaze drones” that he says are being used by the Ukrainian forces.

In the footage, the unnamed officer from the People’s Militia of the DPR says: “The Ukrainian army used imported Kamikaze drones. They were used against my fighters at their position twice. Both times unsuccessfully, no personnel were injured. Their position was not damaged.

“It’s called Switchblade 300. Small, 50 centimeters. But very fast, it flies above the ground, selects a target, it also has a camera on its side. I don’t think it’s effective.”

The Switchblade 300 is an American-built, expendable, ‘kamikaze’ drone that is used by several branches of the US military.

The soldier then says: “It selects a target, makes a circle, picks up speed, and flies to death. According to my thoughts and my fighters’ thoughts. There are about 200 grams of charges, it has no fragments.”

Another person, perhaps the person filming, then asks: “And what about the hull?”

The soldier answers: “The hull is carbon fiber. It had two guide wings at the back. It buzzes very loudly, it has a characteristic sound. It cannot be confused with an ordinary quadcopter, it is very loud.

“They began to use it, as there is not enough American artillery. But we can handle it!

“And here it is, look! They attack the city, the air defense intercepts them, but they shoot again!”

A statement obtained from the DPR on Wednesday, June 15, also said that they are “continuing to destroy the firing points of the Armed Forces of Ukraine in the Avdiivka direction.”

Avdiivka is a city in eastern Ukraine’s Donetsk Oblast region.

“The pressure of the artillery of the people’s militia on the positions of the Armed Forces of Ukraine has been increased to the limit: a counter-battery fight and fire is being carried out on the identified positions and firing points of Ukrainian militants.”

Russian troops invaded Ukraine on February 24 in what the Kremlin is still calling a “special military operation.” June 16 marks the 113th day of the campaign.

President Zelenskyy has also said that Ukraine is suffering “painful losses” in its eastern Donbas region. He stressed that Ukraine needs modern anti-missile weapons to defend its territory.

The United Kingdom and the United States have said they are sending long-range missile systems to Ukraine.

But Ukrainian officials have said that weapons are not arriving fast enough. An adviser to President Zelenskyy, Mykhailo Podolyak, has said that to end the war, they need “1,000 howitzers caliber 155 mm; 300 MLRS; 500 tanks; 2000 armored vehicles; 1,000 drones”.

The European Parliament adopted a resolution on June 8 recommending that the European Union grant Ukraine the status of candidate country for EU membership.

But previous humanitarian corridor attempts have struggled to stay open.

Russian forces now control most of Sievierodonetsk after a month of intense combat, according to UK military intelligence.

NATO ministers were in Brussels for talks this week as Russia’s military advances in the Donbas region prompted pleas from Ukrainian officials for more Western weapons.