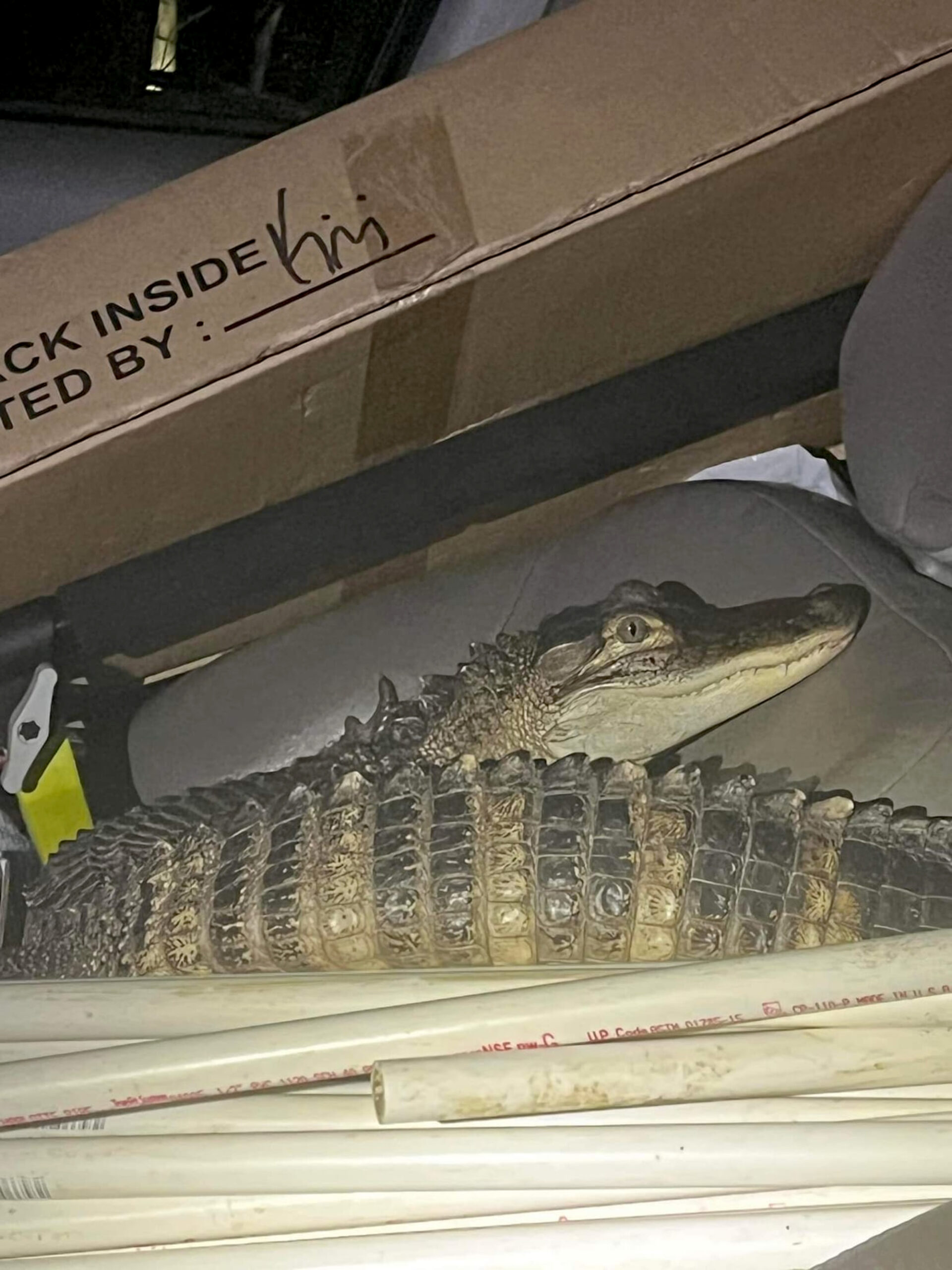 The passenger, Karen the Alligator, attempted to flee the scene, but was taken into custody after a short scuffle on June 11, 2022 in Michigan. (Lake County Sheriff's Office Michigan/Zenger)

Cops in Michigan have arrested a driver for speeding down a highway with an alligator named Karen in the passenger seat.

The video taken just after the nighttime arrest shows police with protective gloves on as one officer lifts the alligator’s tail.

The incident began when cops noticed a driver speeding down US route 10, which connects West Fargo, North Dakota with Bay City, Michigan.

They attempted to stop him, but, instead of pulling over, he decided to try to flee, giving rise to a brief chase.

The chase ended when the car being pursued became stuck between two trees on a pathway.

Cops arrested the driver, who turned out to be a 40-year-old man from Michigan. It transpired that there were pending arrest warrants against him.

Bafflingly, they also found he had an alligator with him in the car, which the officers seized, as can be seen in the footage.

“The vehicle fled after a traffic stop was initiated. The vehicle led deputies, and Michigan DNR [Department of Natural Resources] law enforcement, on a brief pursuit that ended with the vehicle being stuck between two trees on the Rails-To-Trails pathway near S. Forman Rd in Webber Township.

“The driver, a 40-year-old male from Oak Park [a suburb of Detroit], was taken into custody and is now facing several charges. The driver also had several warrants from another jurisdiction.

“The passenger, ‘Karen’ the Alligator, attempted to flee the scene, but was taken into custody after a short scuffle. Karen is not facing any charges at this time. We believe she was an unwilling participant during the incident, nor do we believe she was ever in control of the vehicle.”

The American alligator (Alligator mississippiensis) is found in the Southeastern United States and Tamaulipas, Mexico.

The northernmost area the species is found in is the northern coast of North Carolina, over 500 miles south in latitude to where the arrest took place.

The only other extant alligator species is the Chinese alligator (Alligator sinensis), which is found in eastern China.

The International Union for Conservation of Nature categorizes the former as a species of least concern and the latter as critically endangered.