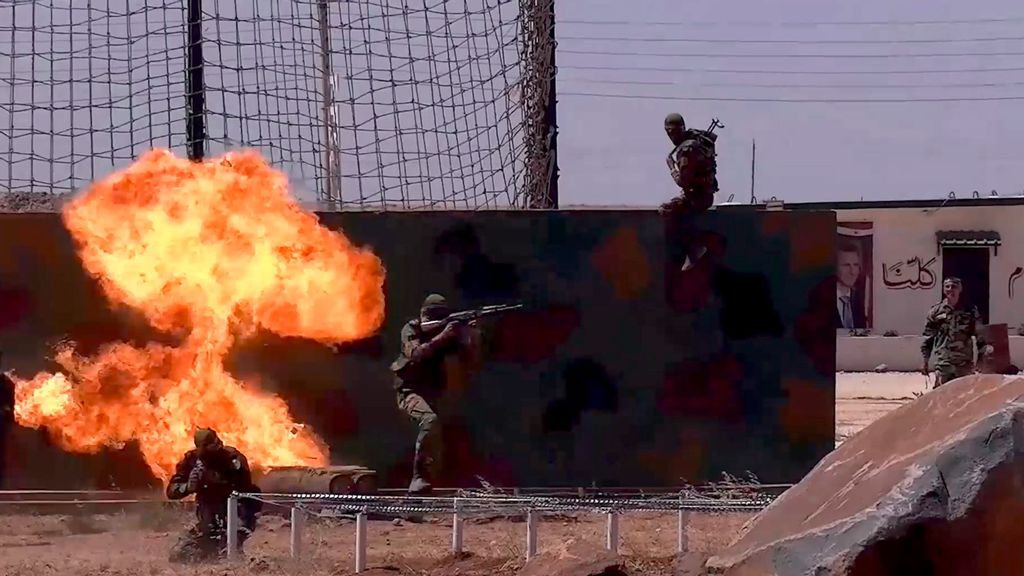 This is the moment Russian troops carry out a baffling training day with elite special operations forces in Syria.

The exercise – staged in the Syrian Arab Republic (SAR) – showed off an array of curious techniques that might have seemed more at home in a Mad Max movie.

At one point in the official footage, a Syrian soldier slides head first down a zip wire with two national flags streaming behind him.

Another clip shows two-man motorcycle assault teams speeding out of a helicopter with the pillion passengers kneeling on the seat taking aim with an assault rifle.

Other edits show troops jumping through hoops of fire like a circus act.

The Russian MoD said on June 14: “The ‘Tigers’ Special Forces Division held joint exercises with the Russian unit of troops in the Syrian Arab Republic (SAR).

“Helicopters, fighter jets and combat crews on motorcycles were involved in the exercises.

“The ‘Tigers’ Special Forces Division is considered one of the most combat-ready in the Syrian army.”

Ukrainian President Volodymyr Zelenskyy said that Russian attacks on the cities of Sievierodonetsk and Lysychansk has turned them into “dead cities.” An aide to President Zelenskyy has said that Ukraine is losing up to 200 troops a day.

The European Parliament has adopted a resolution recommending that the European Union grant Ukraine the status of candidate country for EU membership. On June 8, 438 members of the parliament voted in favor of the resolution, with 65 voting against and 94 abstaining.