"Today, as a result of the shelling of the Budyonovsky district of the city, several people died in the Maisky market."
By Joseph Golder June 16, 2022
Facebook
Twitter
Linkedin
Email 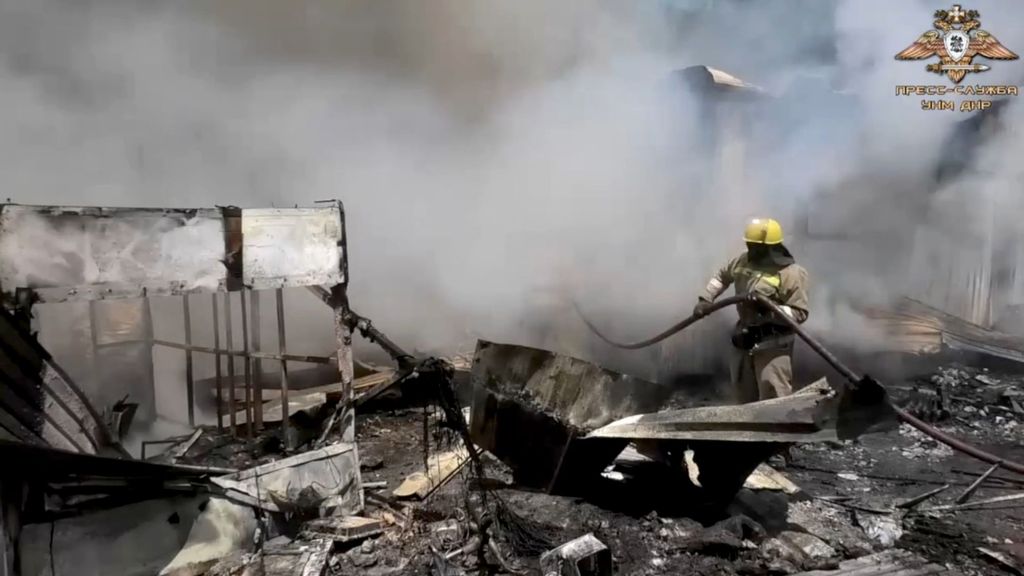 The Maisky market after the massive shelling of the Armed Forces of Ukraine on June 13, 2022 in Donetsk, DPR. (@nm_dnr/Zenger)

These images purport to show the aftermath of a Ukrainian strike on a market in Ukraine’s eastern separatist Donetsk region as the war rages on in the area.

The images begin by showing the aftermath of what has been reported as shelling on a civilian area in the Donetsk region of eastern Ukraine.

The images were obtained from the People’s Militia of the Donetsk People’s along with a statement on Monday, June 13, saying: “Ukrainian nationalists, forgetting about all the norms of morality and the rules of warfare, again fired at a mass gathering of people.

The so-called Peoples Republics of Donetsk and Luhansk have declared their independence from the rest of Ukraine, but have been recognized only by Russia.

“This time, the Maisky market fell under the shelling in the Budenovsky district of Donetsk. Unfortunately, three people died from this terrorist act, [and] at least five were injured with varying degrees of severity.”

Andrey Trubetskoy, a military spokesperson for the DPR, can be seen in the footage, saying (in Russian): “Ukrainian soldiers, realizing the helplessness of their position at the front, continue to take revenge on the civilians of Donetsk.

“Today, as a result of the shelling of the Budyonovsky district of the city, several people died in the Maisky market.”

The footage then shows firefighters putting out a burning shack. Civilians can then be seen crying and staring at the devastation in apparent shock.

A woman identified only as Irina and said to be a resident of Donetsk, then says: “A shell landed. I was at my workplace. My table moved and the doors swung open. I didn’t know what was going on at first. I ran out, a car was on fire nearby.”

Trubetskoy then asks: “Do you know how many people died?”

Irina replies: “No, they said a woman with a child and someone in a shop who was working. When will this horror end?”

Pieces of unidentified shrapnel can then be seen being held up to the camera before firefighters are shown hosing down smoldering wreckage as the footage ends.

Russian state media have reported that at least five people were killed in the incident on Monday, June 13, after artillery strikes they attributed to Ukrainian forces hit the market and a maternity hospital, with it being reported that a child was among the people killed, with at least 22 people injured. We have not been able to confirm these reports.

President Zelenskyy has repeatedly asked for additional weapons, such as tanks and artillery, from Ukraine’s allies.

NATO Secretary-General Jens Stoltenberg has said that Turkey has raised legitimate concerns in its opposition to applications by Sweden and Finland to join the alliance and that talks to find a solution will continue.