We have not been able to independently verify the footage or the claims made by the LPR.
By Joseph Golder June 16, 2022
Facebook
Twitter
Linkedin
Email 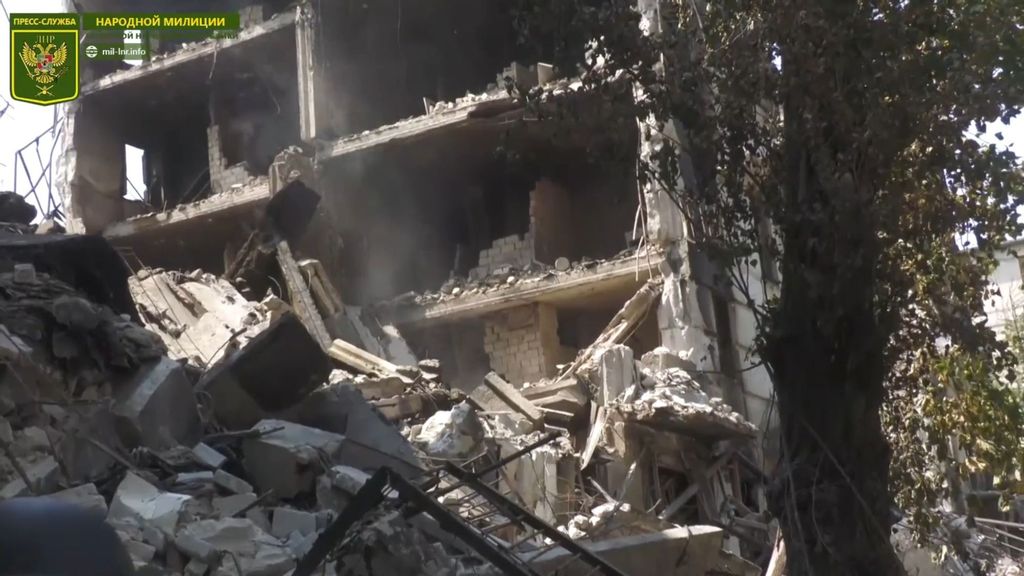 Description: Peoples Militia of the LPR and allied forces knock out the enemy from the industrial zone of Severodonetsk, Ukraine. (@millnr/Zenger)

These images purport to show how the so-called Luhansk People’s Republic is “knocking” Ukrainian forces out of an industrial zone in the besieged eastern Ukrainian city of Sievierodonetsk.

The images appear to show heavy fighting in the city, with smoke billowing from what appears to be a factory. Other images show soldiers taking shelter as explosions and gunfire can be heard in the background.

An unnamed member of the pro-Russian militia of the separatist Luhansk People’s Republic (LPR) in eastern Ukraine can be heard saying in the footage, which was obtained from the LPR militia on the evening of Monday, June 13: “The fighting for Sievierodonetsk continues. Ukrainian ‘Nazis’, who have settled in the industrial zone of the city, are gradually losing their positions and retreating.

“Ukrainian artillery covers the flight of the punishers, mercilessly striking at the already liberated residential part of the city.”

Russian and pro-Russian forces regularly refer to Ukrainian forces as “Nazis,” in reference to Russia’s stated aim to “denazify” Ukraine, one of its justifications for the invasion.

The unnamed spokesperson continues: “The People’s Militia unit and the soldiers of the Akhmat special forces regiment are systematically knocking the enemy out of the industrial zone.

“They have to work carefully, because there are tanks with chemicals at the Azot plant, damage to which can be fatal.

“The defense of the Ukrainian militants crumbles, the enemy, under the onslaught of the People’s Militia and Chechen special forces, leaves their positions and retreats to Lisichansk.”

We have not been able to independently verify the footage or the claims made by the LPR.

It was reported two days ago that Russian shelling had caused a fire at the Azot chemical plant, in which an unknown number of civilians are said to have taken shelter, during what has been described as some of the most intense bombardments of the war, according to the Ukrainian Governor of the Luhansk Oblast region, Serhiy Haidai, 46.

All the bridges to the besieged Ukrainian city of Sievierodonetsk have reportedly been destroyed, Haidai said. Ukrainian forces there are now cut off from any possible retreat and fierce street-to-street fighting is taking place in the city, which has been the focus of Russian artillery fire for weeks.

Ukrainian President Volodymyr Zelenskyy said that Russian attacks on the cities of Sievierodonetsk and Lysychansk have turned them into “dead cities.”

NATO Secretary-General Jens Stoltenberg said earlier this week that Turkey has raised legitimate concerns in its opposition to Sweden and Finland joining the alliance and that talks to find a solution would continue.