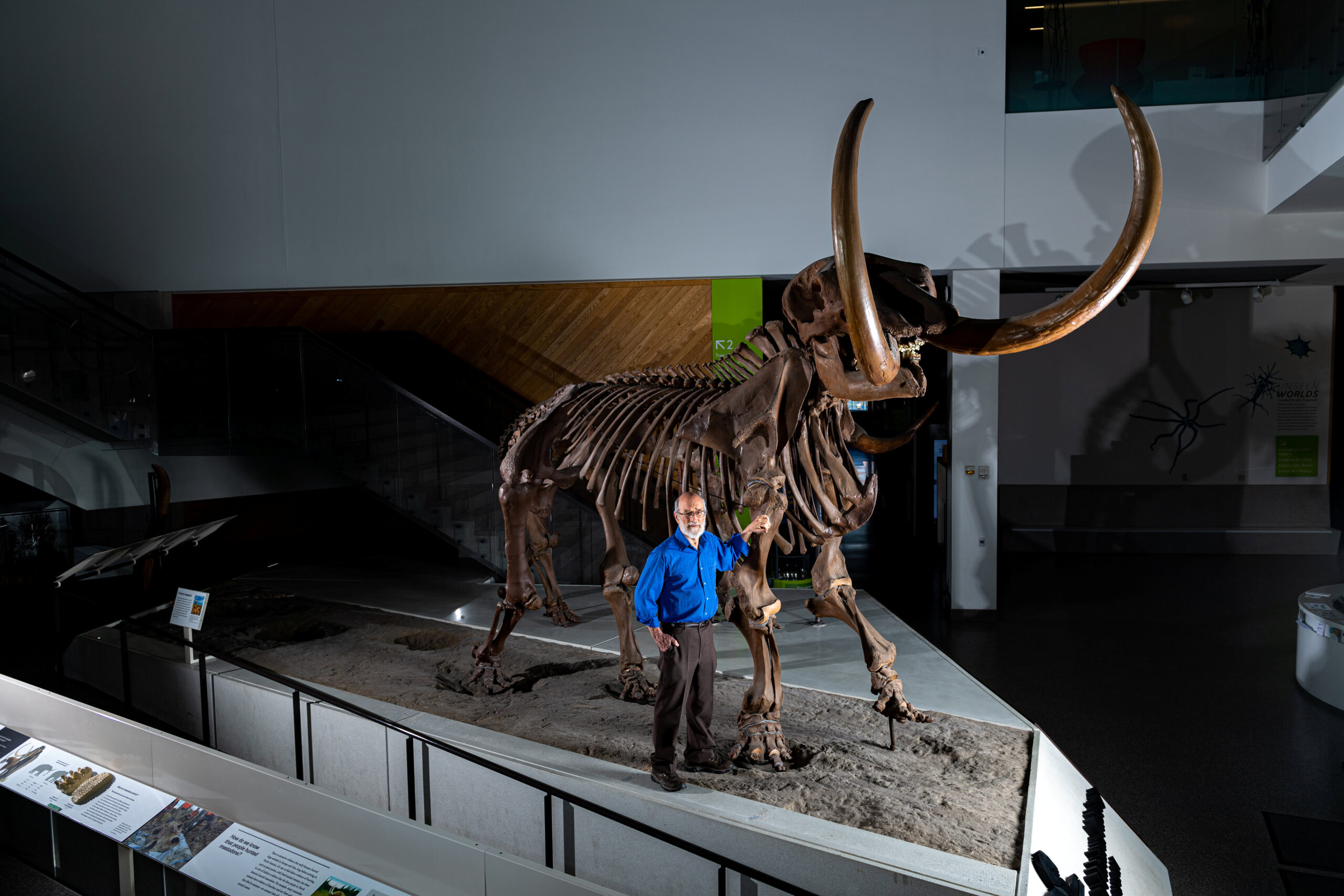 The primitive elephant relative’s astonishing life – from regular migrations to his final moments – has been retraced by scanning a nine-and-a-half foot banana-shaped right tusk.

The eight ton creature, dubbed Buesching, was killed around 13,200 years ago in what today is northeast Indiana.

It was left mortally wounded after another mastodon’s tusk tip punctured the right side of its skull.

The solitary rambler trekked to his preferred summer mating ground annually during the last three years of his life – venturing north from his winter home.

It may also have spent time exploring central and southern Michigan – more than 250 miles away.

Professor Joshua Miller, of University of Cincinnati, said: “The result that is unique to this study is that for the first time, we’ve been able to document the annual overland migration of an individual from an extinct species.

“Using new modelling techniques and a powerful geochemical toolkit, we’ve been able to show that large male mastodons like Buesching migrated every year to the mating grounds.”

The U.S. team used a bandsaw to cut a thin, lengthwise slab from the center of the tusk – which is longer and more completely preserved than the left.

They were able to reconstruct changing patterns of landscape use during two key periods – adolescence and the final years of adulthood.

The Buesching mastodon died in a battle over access to females at the age of 34, the researchers claimed.

Co-author Daniel Fisher, curator of Museum of Paleontology at the University of Michigan, said: “You’ve got a whole life spread out before you in that tusk.

“The growth and development of the animal, as well as its history of changing land use and changing behavior – all of that history is captured and recorded in the structure and composition of the tusk.”

Its original range was likely in central Indiana. Like modern-day elephants, the young male stayed close to home separating from the female-led herd as an adolescent.

His use of the landscape also varied seasonally with a dramatic northward expansion in summer – that included the mating grounds.

Miller said: ” Every time you get to the warm season, the Buesching mastodon was going to the same place – bam, bam, bam – repeatedly. The clarity of that signal was unexpected and really exciting.”

Under harsh Pleistocene climates, migration and other movements were critical for reproductive success of mastodons and other large mammals.

But little is known about how their geographic ranges and mobility fluctuated seasonally or changed with sexual maturity.

Techniques analyzing ratios of various forms, or isotopes, of the elements strontium and oxygen in ancient tusks are helping scientists unlock some secrets.

Mastodons, mammoths and modern elephants are part of a group of large, flexible-trunked mammals called proboscideans.

They have elongated upper incisor teeth that emerge from their skulls as tusks. In each year of the animal’s life, new growth layers are deposited upon those already present, laid down in alternating light and dark bands.

They are similar to a tree’s annual rings. The growth layers in a tusk resemble an inverted stack of ice cream cones, with the time of birth and death recorded at the tip and base respectively.

Mastodons were herbivores that browsed on trees and shrubs. As they grew, chemical elements in their food and drinking water were incorporated into their body tissues – including the tusks.

Strontium and oxygen isotopes in tusk growth layers enabled the researchers to reconstruct Buesching’s travels as an adolescent and as a reproductively active adult.

Three dozen samples were collected from the adolescent years – during and after departure from the matriarchal herd – and 30 samples from the animal’s final years.

A tiny drill bit, operated under a microscope, ground half a millimeter from the edge of individual growth layers, each of which covered a period of one to two months.

The powder produced during this milling process was collected and chemically analyzed.

Ratios of isotopes in the tusk provided geographic fingerprints that were matched to specific locations on maps showing how strontium changes across the landscape.

Both types of samples were collected from the same narrow growth layers – enabling specific conclusions about where Buesching journeyed – and when.

A spatial computer model was used to estimate how far the animal was moving and identify the probable locations.

“But, really, we have just scratched the surface of what this information can tell us.”

The next step is to analyze the tusks of a different individual – either another male or a female.

Buesching is named after Dan Buesching who stumbled on its remains at his peat farm near Fort Wayne in 1998.

A full-size fiberglass-cast skeleton is on display at the University of Michigan’s Museum of Natural History in Ann Arbor.

Mastodons are cousins of elephants and mammoths. They died out about 10,000 years ago. The study is in Proceedings of the National Academy of Sciences.

«Previous Post
Wild Strife: A Wildlife Campaigner Gets Threatened With A Fine Due To Sanctuary Smelling Of Animals»Next Post
Ad Enough: The Cost-Of-Living Crisis Is Forcing Exotic Pet Owners To Abandon Their Animals