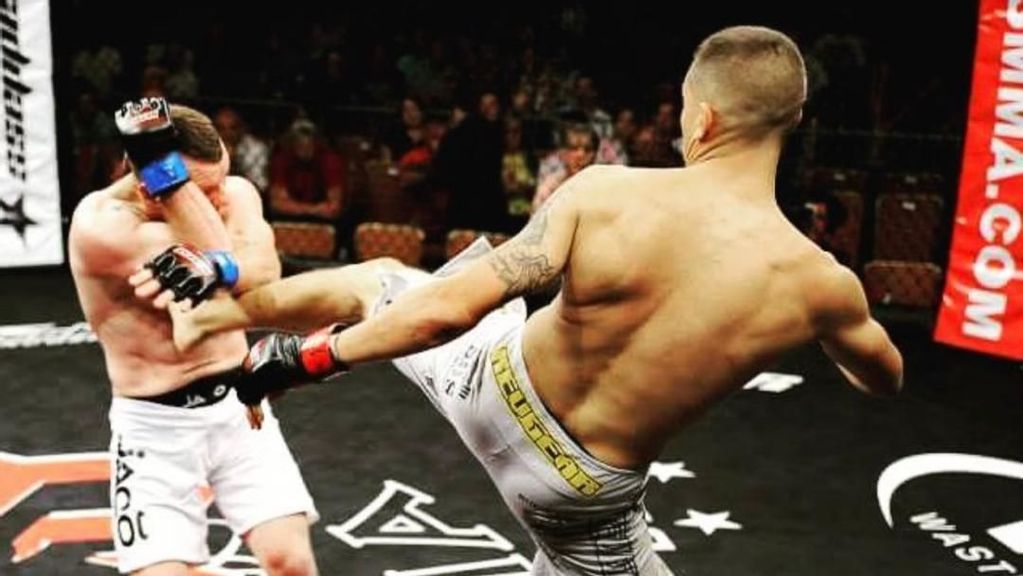 Rico DiSciullo displays one of his favorite weapons, a liver kick, during one of his bouts. (Will Paul Photos).

Rico DiSciullo’s career was temporarily stalled due to a nagging knee injury. It sidelined the Peabody, Massachusetts, native for nearly four years. On a mission to resurrect his career, DiSciullo faces Gareth De La Cruz at Combat FC 1 on June 17 in Wilmington, Massachusetts.

DiSciullo returned to the cage in March and nabbed a quick submission (rear-naked choke) win over Rob Fuller in 59 seconds. As he attempts to fulfill his dream of fighting in the UFC, DiSciullo says he understands how imperative an outstanding showing against De La Cruz would be to get him one step closer to the UFC Octagon. Fully healthy and focused, DiSciullo hopes that his work in the gym carries over to the cage, and he can show his full potential.

Zenger caught up with DiSciullo, who goes in-depth about the injury that led to his hiatus, his upcoming bout and more.

Zenger: You competed on “Dana White’s Contender Series” in 2018, and then you disappeared until March of this year. Where did you go? What happened to you?

DiSciullo: I was actually prepping for another fight, and about two weeks before it took place, I had some knee issues for a while. It ended up giving out. My meniscus completely tore. It’s what they call a bucket tear in the meniscus. I saw a specialist. It’s a guy I used to train with actually in one of my gyms in Boston.

He’s a knee specialist. We were training to fight still, and when my MRI came back, he was like, “Listen, you really shouldn’t take this fight right now because you’re going to end up tearing your ACL and MCL. Your meniscus is done. I can reattach it now, and you’ll probably get it back 100 percent if everything heals right, which it should. But if you keep going, you’re probably going to tear your ACL, and it’s going to be a year.” I took his advice, and it was the best thing I did because I was out a couple of months. COVID happened, but now, my knee is completely healed. It’s better than it’s been in 8 years.

Zenger: Your fight in March you scored a 60-second submission win. Did you hope to get in a little more cage time given the layoff?

DiSciullo: To be honest, going through preparation and getting to the cage is half the battle sometimes. I’ve had enough fights, 15 or so amateur fights, and my last one was my 12th pro fight. With that long layoff, I was just happy to get there. It was a long time coming. I put a lot of work into getting back into it, so it was a little bittersweet. I would have liked it to go a little bit longer, but hey, it worked out. I got the submission the way we were drilling it at, Broadway Jiu Jitsu. It was pretty much the same technique we were doing, so it worked out. It shows the coaching that I’m going through paid off.

Zenger: You get the call from Combat FC to fight on June 17 as the headliner on UFC Fight Pass, I’m sure you jumped on this opportunity.

DiSciullo: Absolutely! They contacted me; the timing was great. I just did my fight in March, which was local. This one is pretty local as well, so I don’t have to travel. I’m right back to it, my body’s doing great, I’m in really good shape, and I got the best people around me doing everything they can to make a big push.

Zenger: What are you looking to accomplish in this fight?

Discuillo: A little bit of everything really. I feel like I have so much to showcase that I haven’t yet. People that I train with on a daily basis, some of the best in the world, they understand where I’m at and what my potential can be. My coaches &mldr; we’ve all put in a lot of work for a long time. The things I do in the gym, I would love to have that transfer into the fight.

You gotta do what you gotta do in a fight to win. Realistically, I just want to be sharp, on point, and as always, do my best to get a finish and be a fan favorite. I’m always going in there for a finish, give it everything I got, and put on a show to get that W.

Zenger: You guys are fighting at a catchweight of 140 pounds. Do you think that impacts either of you guys?

DiSciullo: De La Cruz has had a layoff as well. I don’t really care too much. I don’t think size will be any type of issue. We are both pretty much 35ers. I think he gained some weight during COVID like everybody did. I don’t think it’s too much of a difference. It will make the weight cut a little bit easier, so if anything, it will probably benefit both of us.

Zenger: You mentioned making a push. Obviously, the goal is to fight in the UFC. Do you feel like you are on the right track of accomplishing that?

DiSciullo: I think I’m right there. I think if I go out there as sharp as I can be, put on a clinic and get a big finish, I’d be surprised if I don’t get a call. I have been putting in work for a long time. I’m a veteran. I’ve fought some quality guys. I’ve taken some weird risks with guys dropping out of fights at the last minute a bunch of times. I have moved up a weight class and got the W despite not knowing nothing about the guy I was fighting. I’m prepared, I’m ready, I have put all the work in, and I have the best guys I could possibly put around me. All of those things are out of my hands. I just focus on being the best that I can be on June 17th, putting on a show, and getting that finish.

Zenger: Have you watched any footage of Gareth?

DiSciullo: Yeah, I found a little bit of footage. Me and my camp talked about certain things that we think he’s going to do. I focus for the most part on myself and just getting better, so that I can be prepared for anybody and make adjustments in the fight when I have to. I’m more focusing on myself to be able. &mldr; We always go in there with a game plan, but you have to be able to adjust because game plans sometimes change during the fight, your opponent starts doing different things. You always gotta be prepared to make those changes and be well-rounded to do everything.

Zenger: Fighters have to take good and bad experiences and apply them moving forward. What experiences did you take from fighting on “Dana White’s Contender Series”?

DiSciullo: It was a tough one. I got eye gauged early on. Then there were a bunch of penalties. Probably the most penalized fight in UFC history. It was really frustrating. There was a point where I couldn’t see in the fight from the eye gauge. I was going in there trying to finish because I couldn’t see. Then I got hit in the nuts and in the back of the head, so I was really frustrated.

I came there for a finish to try and win, so I honestly just started swinging for the fences trying to take him out. I made it to the third round visually impaired. It helps me with knowing, no matter what happens, I got that dog inside of me. I can go through whatever, and I’m going to try and finish. You can try to stop me; it will be very difficult. I’m bringing it.

Zenger: Looking at his style and knowing what you bring to the table, are you expecting this fight to stay standing or more of a grappling match?

DiSciullo: We’ll see. I think he’s going to be a little hesitant in the beginning, a little feeling-out process. Who knows, maybe we come out blazing. I’m going to take it as it goes, make the proper adjustments and do what I gotta do. I’m not going to bet on one thing happening. I’m going to go out there, feel things out and let my experience and the way I process information take over, and I will react.

Zenger: Perfect case scenario, how does this fight play out?

DiSciullo: In a perfect world, a little bit of everything in this fight. Some great striking, a little bit of wrestling, good Jiu-Jitsu exchanges, and I hit him with a highlight-reel knockout. A walk-off shot, maybe a body shot to the liver, or a spinning back kick to the face and just walk off.