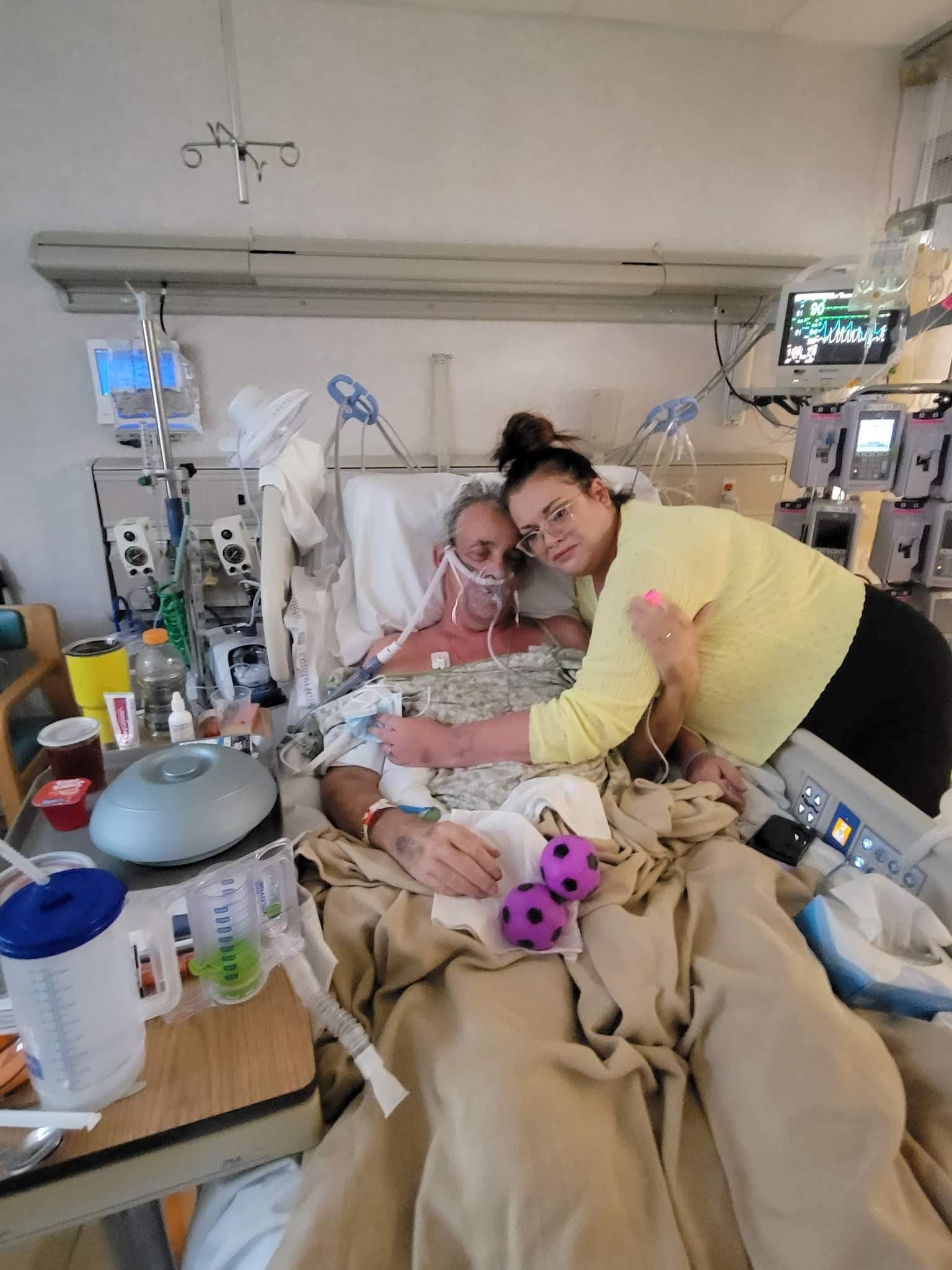 A daughter granted her dying father his last wish - by reuniting him with his biological father in a heartbreaking video call just days before he passed away. (Brandi Guicciardini/Zenger)

A daughter granted her dying father his last wish – by reuniting him with his biological father in a “heartbreaking” video call just days before he passed away.

Brandi Guicciardini, 33, reunited the pair on May 7 – after almost 60 years apart.

She was able to find her paternal grandfather after submitting her father’s pre-adoption birth certificate and ancestry test this year.

She says she still speaks to the 81-year-old everyday – and her family are planning on visiting him at Christmas to spread her father’s ashes together.

The mother-of-one hopes says she hopes her father’s story will inspire other adopted children to “never give up in finding their roots.”

Brandi, from Oklahoma City, Oklahoma, said: “The one thing my father always wanted to know was who his biological parents were.

“He had been sick since December 2021 – it started with breaking his ribs when he was coughing.

“He was also in remission from cancer after being diagnosed back in 2009 with chronic lymphocytic leukemia (CLL) and lymphoma.

“Then in February this year he developed COVID-19 and pneumonia.

“While he was hospitalized, he caught COVID-19 for a second time and ended up with pneumonia again.

“During this time I remembered that my dad still didn’t know who his biological father was.”

Brandi’s father was born in August 1964 and placed for adoption at birth.

His birth name was James Edward Odell, but when he was adopted he became Robert ‘Bobby’ Hadley Reinhart Jr.

Robert served in the army in 1982-1986, where he was deployed to Grenada when the Caribbean island was invaded by the United States.

Brandi, who homeschools children as a living, said: “It wasn’t until my Dad got a bit older that he started to wonder where he came from but he was never able to find his biological parents.”

Before this, Brandi described the process as “almost impossible.”

She said: “Nine out of 10 times the state denies your request as an adopted child – but opening pre-adopted records opens the doors for so many people to find out about their biological families.”

New York is one out of only 10 states to allow adoptees unrestricted access to their birth certificates.

The following year, Brandi was able to pay for her dad’s original pre-adopted birth certificate – which mentioned his mother’s name ‘Barbara Hall,’ but not his father’s.

Brandi said: “We were able to find my Dad’s half brothers through Barbara’s name but unfortunately she passed away back in 1999.”

At this time, Brandi’s father had been in and out of hospital for three months – and so she decided to submit her own ancestry test on March 10.

After much searching, Brandi was able to determine that her grandad – her dad’s biological father – was Robert Stratton, who resided in Bennington, Vermont.

Brandi said: “We found out that we shared 19 percent of the same DNA, and I was finally able to get in touch with Grandpa through the Ancestry site.

“I ended up speaking with him on FaceTime and told him about our genetic match and he said, ‘Well, DNA don’t lie – you’re my grandkid!’.

“It was incredible – I was completely over the moon and immediately I wanted to get my dad on the phone with his real father.

Brandi, on a race against time, was determined to bring the long-lost father and son together.

“Dad was staying at Crossroads Hospice and Palliative Care on May 7 and I managed to get them both on a video chat,” she said.

“It was quite quick because of Daddy’s breathing issues – but that was his last wish before he passed.

“My grandfather started crying and told my dad, ‘I wish I would’ve met you 50 years ago’.

“He never knew about my dad, and I honestly believe if he did he wouldn’t have let him get adopted, he would have raised him himself.

“My father replied saying, ‘Well, Dad, my lungs are only working at 5 percent and my kidneys are shutting down – my heart is dying. I’m not going to be able to come up and meet you but Brandi, Mom, and JoJo will visit’.

“Grandad said it was okay and they would ‘meet one day’.

“Then my Dad had to get off the phone with a coughing fit – and that was the first – and last – time they ever got to speak.

“I felt my heart break.”

Sadly, Brandi’s father passed away just a few days later on May 12 – at just 57 years old.

Brandi recalled fond memories with her father, from fishing to gathering food in the woods.

She said: “Dad showed us how to eat fresh corn if you get lost in the woods: you can eat bark from black liquorish trees!

“He was a mechanic – so it’s ironic that when he came back from the hospice he passed away in a garage because that’s where he spent most of his life!

“One of my fondest memories is him teaching me how to do an oil change – but I forgot to put the plug in so all the oil came out – we laughed so much that day.”

Brandi’s father and mother, Mary Reinhart, met at a Northeast truck stop in 1987.

Mary fondly remembered the moment, “as though it was yesterday”.

The widow said: “I was engaged to another person at the time who had left me in a car when it was cold and windy – it was less than 0 degrees and I was freezing!

“Bob was walking past and saw me lighting up a cigarette in the car – and the rest is history”.

Brandi hopes that her father’s story will inspire other adopted children to “never give up”.

She said: “If you are adopted and you want to know your roots, don’t give up. You never know unless you try.”

She added: “Even on his death bed my daddy never gave up – so we fought to the end too.

The family – Brandi, her son and her mother are planning on visiting their newfound family member in Vermont at Christmas time.

Brandi said: “Grandad is going to take us up to the mountains and we’re going to scatter some of Dad’s ashes there – that way my dad’s always there protecting him.”