The Ukrainians have said that the vehicles had been used to shell the city of Sievierodonetsk.
By Joseph Golder June 14, 2022
Facebook
Twitter
Linkedin
Email 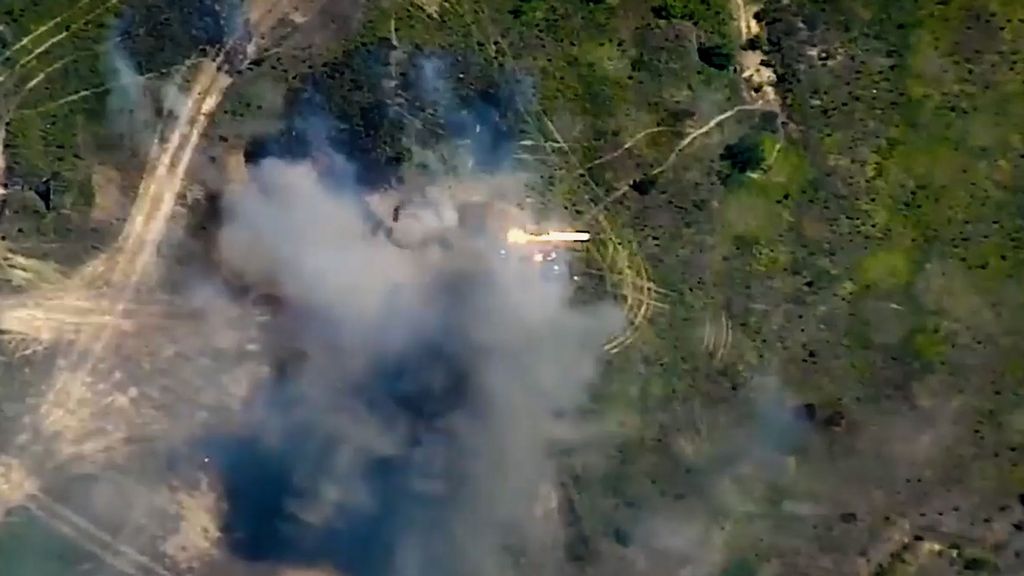 Special Operations Forces of the Armed Forces of Ukraine claim that they burned three Russian Multiple rocket launchers in the Luhansk region in Ukraine. (@usofcom/Zenger)

The Ukrainians have said that the vehicles had been used to shell the city of Sievierodonetsk.

The released images appear to show the Russian multiple rocket launcher vehicles being hit by Ukrainian artillery fire, leaving them destroyed and on fire, with black smoke rising into the air.

The footage was obtained from the Command of the Special Operations Forces (SSO) of the Armed Forces of Ukraine on Monday, June 13, along with the following statement: “Luhansk region: hunting for the enemy. Thanks to the SSO of Ukraine, three enemy Grads were burned.”

The BM-21 Grad is a multiple rocket launcher vehicle originally built in the Soviet Union.

The SSO added: “During reconnaissance of the enemy’s rear in the Sievierodonetsk direction, our operators discovered several MLRS BM-21 ‘Grad’ installations.

“The enemy used them to shell Sievierodonetsk, other settlements and positions of the Defense Forces of Ukraine.”

They added that after having established the exact coordinates of the enemy vehicles, their soldiers relayed this information to artillerymen operating M777 howitzers.

The SSO added: “Our colleagues destroyed 3 out of 4 enemy MLRS installations with accurate fire. Another Grad installation was damaged as a result of the shelling.”

President Putin has said that the West will not be able to wean itself off from Russian oil and gas for years. U.S. officials have now also admitted that Russian profits on energy might even be greater than they were before the war started.

The European Parliament has adopted a resolution on June 8 recommending that the European Union grant Ukraine the status of candidate country for EU membership. In the recent legislative development, 438 members of the parliament voted in favor of the resolution, with 65 voting against and 94 abstaining.