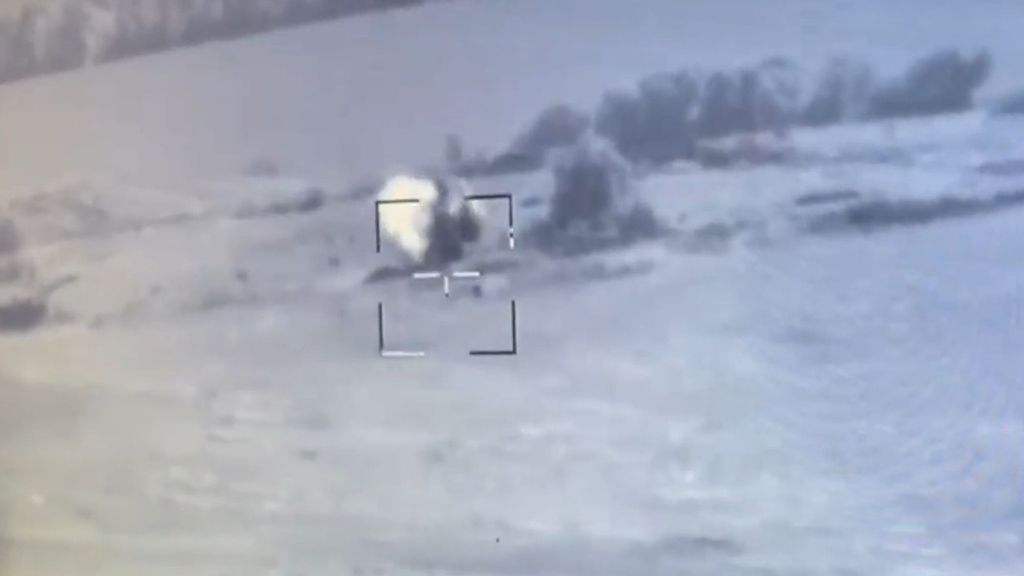 This video purports to show a Ukrainian anti-tank missile blowing up a stronghold of Russian troops and ammo.

The released video opens with a view of what is apparently a Russian military position in the crosshairs before a missile is fired toward it.

Seconds later, a huge explosion is seen and the Ukrainian troops watching the event unfold on their screen can be heard cheering.

Zenger News obtained the footage from the Operational Command North (OC North) – a command of the Ukrainian Ground Forces – on Thursday, June 9.

OC North said (in Ukrainian): “Somewhere in the Donbas, soldiers of one of the units of the Operational Command North went hunting with their faithful Stugna.

“A little hard work and the result – a clear destruction of the enemy, along with ammunition.

The Stugna-P is a Ukrainian anti-tank guided missile system developed by the Luch Design Bureau in Kyiv. It entered service in 2011.

It was famously used by Ukrainian forces on April 5 to down a Russian Kamov Ka-52 attack helicopter.

And during one engagement near Izyum on April 25, four tanks were destroyed or damaged in four minutes by the same Stugna-P operator.

Russia invaded Ukraine on February 24 in what the Kremlin is still calling a “special military operation.” June 10 marks the 107th day of the invasion.

More than 1,000 Ukrainian troops captured in Mariupol have been transferred to Russia, according to Russian media. Ukrainian officials estimate that at least 21,000 civilians have been killed in the city.

Two British men, Aiden Aslin, 28, and Shaun Pinner, 48, have been sentenced to death by a court in separatist-controlled eastern Ukraine after being captured while fighting with the Ukrainian army in Mariupol against Russian troops.

President Zelenskyy has said that Russian attacks on the cities of Sievierodonetsk and Lysychansk has turned them into “dead cities.” But he added that Ukrainian forces could still hold Sievierodonetsk despite being outnumbered.

Earlier this week, Russia’s ambassador to the United Nations, Vassily Nebenzia, walked out of a Security Council meeting after his country was blamed by European Council president Charles Michel for triggering a global food crisis.

President Zelenskyy has requested that a safe corridor be set up so that the country may export grain currently stuck in Ukrainian ports.