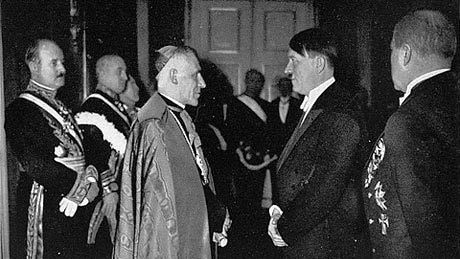 He has been at the center of charges involving the Vatican, the Nazis and what he did or did not do to help Jews during World War II.

The Holy See has defended the pontiff, saying he worked behind the scenes to rescue Jews from Nazi Germany. However, critics have long argued Pius XII did nothing to stop the genocide of the Jewish people.

Pius XII’s indifference was so pronounced he is often referred to as “Hitler’s pope.” The name was given to Pius XII by historian John Cornwell in the 1999 book by the same name. Kertzer reports the pope was not the champion of helping Jews, as the Vatican has previously argued.

When the wartime pope died in 1958, his papers were sealed in the Vatican Apostolic Archive, leaving unanswered questions about what he knew and did during World War II. It has been a major point of controversy for decades — and without answering the questions concerning his guilt or innocence, the Vatican prepared to canonize him a saint, a process that started in 2000.

In 2020, the archives were opened. Historian David Kertzer, a Vatican scholar and Brown University professor, has now written a new book that sheds light on Pius XII during the war years. Kertzer’s 484-page book, “The Pope at War” is based on a treasure trove of documents — 12 volumes to be exact — from the Vatican, along with state archives of the United States, Italy, France, Germany and Britain.

As the Holocaust unfolded, what exactly did the Vatican do to help Jews escape?

That’s a critical question for history, and the documents reveal some interesting details. The book, which hit bookshelves June 7, attempts to answer that question and much more.

Here’s are five important points from “The Pope at War”:

1. The Pope’s advocacy only focused on Jews who had converted.

Kertzer describes how the Vatican worked hardest to save Jews who had converted to Catholicism or were children of “mixed marriages” between Catholics and Jews. Documents reveal the Vatican searched baptismal certificates and lists of those who had converted, which were handed over by the German ambassador to the Holy See at the time. (The pope did not intervene for other Jews, unlike Archbishop Andrei Count Sheptytsky, the head of the Ukrainian Greek-Catholic Church, who defied the Nazis and hid Jews.)

The authoritarian pope wanted the Holy See to stay out of the war. Kertzer claims the pope was motivated to protect the Vatican and Catholic interests in Italy and across Europe as the Nazis swept to power. Kertzer said the pope was afraid of fallout from the war — concerned that Catholics would suffer in German-occupied countries, followed by fear of communism spreading across Europe if the Axis powers lost. However, Pius XII refused to condemn “the Nazis’ ongoing extermination of Europe’s Jews,” even as the Allies stacked up victories and the tide of war shifted. “As a moral leader, Pius XII must be judged a failure.” Kertzer said.

3. The Vatican newspaper was told not to report on Nazi atrocities.

The Roman Observer, the official Vatican newspaper, was ordered by the Holy See to suppress news about German atrocities throughout the 1940s, though the evidence was clear, and many urged him to do so. The Vatican maintained peace with Italian dictator Benito Mussolini, who had allied himself with Adolf Hitler. (In Kertzer’s Pulitzer Prize-winning 2014 book “The Pope And Mussolini: The Secret History Of Pius XI And The Rise Of Fascism In Europe,” the author says the Vatican gave legitimacy to Mussolini’s fascist regime and challenges the notion that either Pius XII or his predecessor fought against fascism.)

The newspaper neither reported on nor ever denounced Nazi massacres — including when some 1,000 Jews were rounded up in Rome, just outside the Vatican’s walls, in 1943 and sent via train to Auschwitz.

4. Pope got help from a prince to communicate with Hitler.

Pius XII’s decision to avoid direct public criticism of Hitler or the Holocaust may have stemmed from a 1939 negotiation between the Vatican and the Germans. The intermediary was a German prince named Philipp von Hessen, the son-in-law of Italy’s King Victor Emmanuel III.

The pope, who spoke German, met Hitler’s envoy for the first time on May 11 of that year in Rome. According to transcripts included in the book, the pope said, “I have been very considerate, and the Reich Chancellor’s reply was very kind. But the situation has since deteriorated” — a reference to Hitler closing Catholic schools and seminaries and the slashing of funds benefiting churches in Austria.

“I am certain that if peace between church and state is restored, everyone will be pleased,” the pope added at the time. “The German people are united in their love for the Fatherland. Once we have peace, the Catholics will be loyal, more than anyone else.”

5. The Vatican’s version of the Pope XII behavior isn’t shared by others.

Johan Ickx, who serves as the archivist of the Vatican’s secretariat of state, praised Pius XII over his efforts and was quoted in the Vatican News as saying: “For the Jews it was obvious and clear that Pius XII was on their side and both he and his staff would have done everything in their possibility to save them.”

This is the Vatican’s view. It is not an opinion shared by the Jewish community or other historians. The Roman Catholic Church formally apologized in May 1998 for failing to take more decisive action in challenging the Nazi regime during World War, but the apology was seen as falling far short of expectations, particularly in its refusal to hold Pius XII accountable for his silence.

Kertzer’s book, which took two years to research, compile and write, addresses many questions about the complicated circumstances that influenced decisions Pope Pius XII made during the war years.

The book — and the archival material contained in it — reveals secrets, lies, equivocations and justifications that have haunted the past 80 years. It ultimately paints a portrait of a mixed legacy fraught with contradictions.

Clemente Lisi is a senior editor and regular contributor to Religion Unplugged. He is the former deputy head of news at the New York Daily News and teaches journalism at The King’s College in New York City.