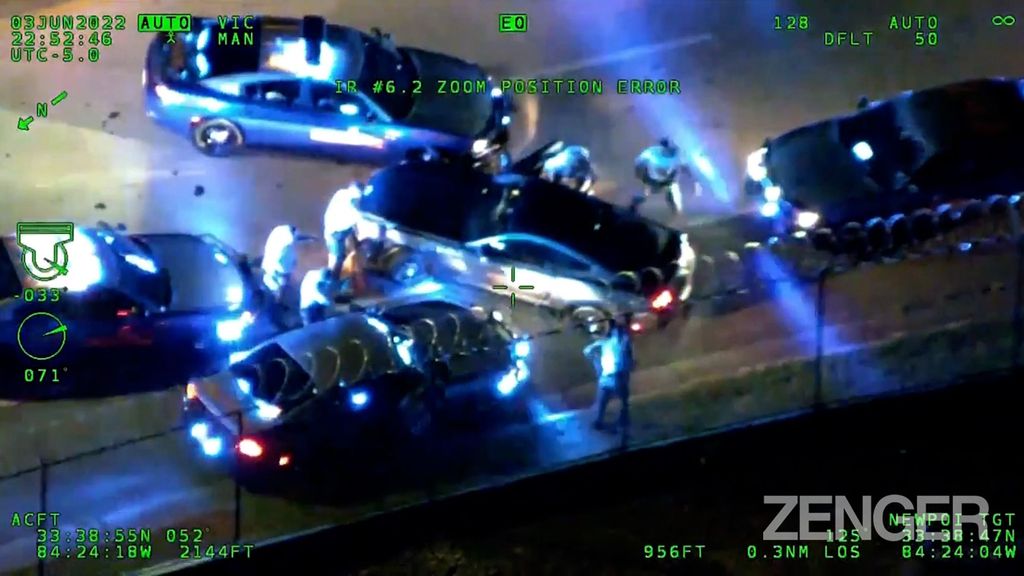 A high-speed car chase between a man and police ended with the suspect being arrested right next to a busy airport in Atlanta.

The incident took place near the Hartsfield-Jackson International Airport, in Atlanta, Georgia, on June 4, with the Atlanta Police Department (APD) saying that the suspect had refused to stop during a traffic stop.

The images, filmed by a chopper from the APD’s Phoenix Air Unit, which provided air support to Georgia State Police (GSP) officers on the ground, shows the suspect going through red lights and weaving in and out of traffic with multiple police cars hot on his tail.

The images, which switch back-and-forth from infrared to color, show the suspect heading towards the Hartsfield-Jackson International Airport.

The police cars, with their lights flashing, can be seen at one point being distanced by the suspect’s vehicle before they catch up again and perform a PIT maneuver that causes the vehicle to spin out.

The suspect tries to take off again, but the police are undaunted and hit the suspect’s vehicle again, causing it to spin out once more.

This time, four police cars can be seen boxing the suspect’s vehicle in before police officers get out with their guns raised.

The police said that had the suspect reached the airport, the police helicopter would have been forced to land due to the busy airspace.

But fortunately, the police on the ground were able to avoid that from happening and one officer, who appears to be accompanied by a K9 police dog, appears to order the suspect to get out of the vehicle.

The suspect complies and is arrested by at least three police officers.

The camera on board the police helicopter then pans up and shows just how close to the airport the chase ended, with the runway visible just across a barrier next to the road.

The APD said in a statement obtained by Zenger News that they and other units had “attempted to conduct a traffic stop on a vehicle who refused to stop.”

They added: “The driver’s refusal to stop escalated to a vehicle pursuit, with Phoenix providing support from the air and GSP units pursuing from the ground.

“During the pursuit, the driver led both Phoenix and GSP units to Hartsfield Jackson International Airport, likely believing this would prevent Phoenix from continuing air support due to heavy air traffic in that area.

“However, the suspects attempt was unsuccessful as Phoenix was able to maintain a visual and occupy the airspace with the permission from Hartsfield Jackson Air Traffic Control.

“Phoenix and GSP both continued the pursuit which ultimately led to a successful pit maneuver performed by GSP. The suspect was taken into custody by GSP. We’d like to give a big thank you to our Air Unit team, and GSP for a job well done.

“This should also serve as a reminder to criminals who attempt to flee and elude police, in or around Hartsfield Jackson International Airport, that we will be relentless in our pursuit until you are captured.

“The Atlanta Police Department Air Unit maintains a great working relationship with Hartsfield Jackson’s Air Traffic Control team, and we thank them for their continued cooperation and support.”

It is currently unclear why the suspect, who has not been named, attempted to flee from the police.