The siblings have seen the star live five times, and already have tickets to see him on four more occasions.
By Darko Manevski June 13, 2022
Facebook
Twitter
Linkedin
Email 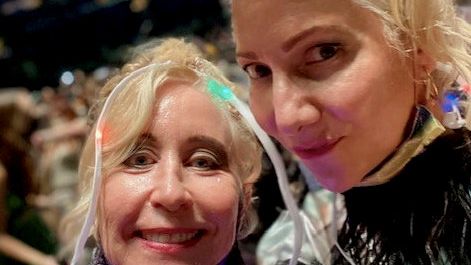 Middle aged sisters who are obsessed with Harry Styles flew more than 6,000 miles from the U.S to see him in Glasgow. (Matthew Newby SWNS/Zenger)

A pair of middle-aged sisters who are obsessed with pop singer Harry Styles flew more than 6,000 miles from the U.S. to see him in Glasgow, Scotland’s largest city.

Mother-of-two Pati Going Frey, 68, and sibling Marian Going Grill, 54, will be trawling charity shops to find kilts to dress up in especially for seeing the ex-One Direction star at Ibrox Stadium on Saturday, June 11.

Pati, who lives in Boulder, Colorado, made a 8,800-mile trip and treated her sister to the jaunt.

Mom-of-four Marian has traveled 6,000 miles from Lancaster, Pennsylvania, to see her idol, leaving behind a 10-year-old son who Pati says is “eye-rolling” about the adventure.

The siblings have seen the star live five times, and already have tickets to see him on four more occasions – and are choosing not to think about the cost of the trip to Scotland as it would take the joy out of it.

Marian, who works as an elementary school principal, said: “We loved him in One Direction and we both had younger kids and they were on board way before us.

“We went to our first concert in Philadelphia around 2015 and the rest is history.

“Our children roll their eyes when we talk about him but we have wonderful husbands who see the joy in our faces, even when we just talk about him.

“When we go to the concerts, it is a community and we become friends with everyone in our vicinity.

“But we have noticed that the average age group is younger than us. We’re the moms.”

Retiree Pati said: “We would lose our joy and excitement if we kept track of what this cost.

“I’m treating my sister; she has almost completed her doctorate.

“We expect pure joy, wonderful memories and it will keep us fueled until the next one.

“He’s coming to New York, to play at Madison Square Garden in the autumn, and he’s playing 10 nights – I got tickets for three and then my American Express fraud alert occurred and I couldn’t buy more.

“I am absolutely going to try again.”

They are staying in Edinburgh and having a tour before heading to Glasgow for the performance – and hope to be able to meet Harry to tell them how much he means to them.

On Sunday, June 12, they will fly back to the States – having had a chance to explore their family heritage.

Pati said: “If we met him, I think I would not be able to speak.

“I would just say ‘God bless you, thank you, you are amazing and an inspiration to so many people.’

“Maybe I would cry. It would probably be the most emotional moment of my life, kind of on the level of childbirth.

“I’m 68, my sister is 54. I don’t think I am his target audience but I sure am a very enthusiastic person.

“I could be his grandmother but I don’t care.

“The joy, excitement and the crowd is about the most fun thing you can do.

“We are going to a nearby charity shop to buy kilts and marry them with tutus and anything we have brought along that we can find.

“We specifically make all our concert outfits, we are getting haircuts too and calling it Hair Styles for Harry Styles.

“As we researched prior to our journey, we assumed we were Irish but actually, my grandmother is a Morton and we have a lineage of Cross, that’s Scottish.

“So, we are going to learn more about our heritage.

“We are very proud – Scots are great, we just love them.”