Stork About A Baby Boom: Record Hatching Of Rare Chicks 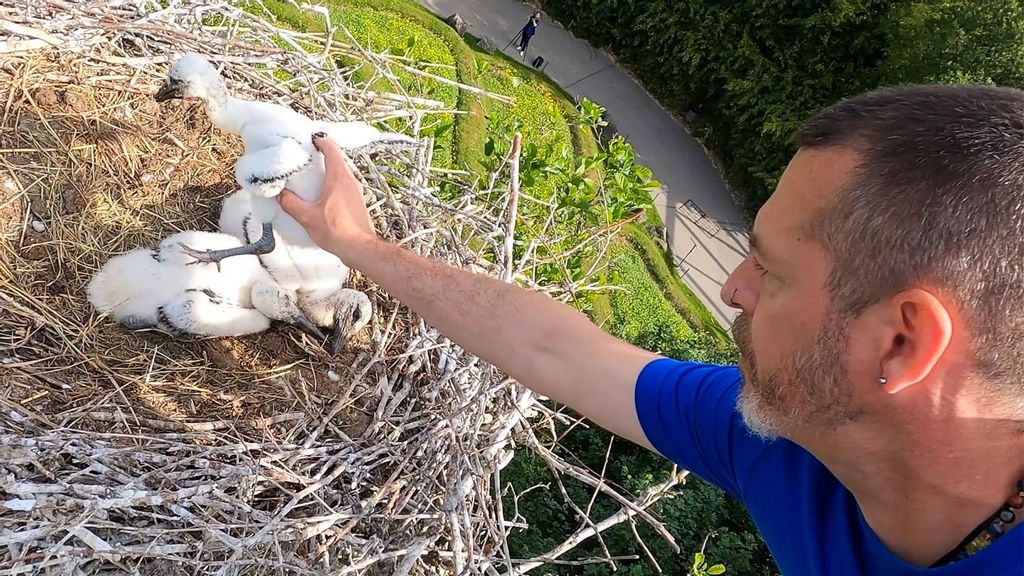 Animal keeper Nicolai Becker puts the rescued stork chick back in the eyrie at the Zurich Zoo in Switzerland. (Zoo Zurich/Zenger)

A zoo has seen an astonishing number of white stork chicks – once considered extinct in parts of Europe – hatching this spring thanks to perfect weather.

Switzerland’s Zurich Zoo said in a statement on June 7: “52 young storks are growing up at Zurich Zoo this spring.

“The record number is thanks to the good weather. After an average year in 2021, this year’s balance sheet is very pleasing.”

One lucky chick had to be returned to its family on a firefighter’s ladder after falling out of the nest to the ground below.

Video footage of the rescue shows the chick being raised to the roof-top nest while being held by a keeper and restored to its roost.

The zoo explained: “One of the young storks was lucky in misfortune.

“After a big fall from the eyrie, he found his way back to the top thanks to the staff of Zurich Zoo and Protection & Rescue Zurich.

“The mild spring temperatures and dry weather ensured that an exceptional number of young storks hatched.”

The zoo pointed out: “The survival chances of the young storks depend strongly on the weather. Above all, cold and wet weather affects the young birds.

“Every year, the young birds are ringed so that they can be identified during later observations and more can be learned about their behavior. This year, too, Protection & Rescue Zurich actively supported the zoo in ringing the young birds. With their turntable ladder it is possible to reach all 22 nests.”

Zurich Zoo stated: “During her morning rounds, an animal keeper found a small, two-week-old chick on the ground below an eyrie. It had fallen from the nest from a height of about 15 meters (50 feet).

“Luckily, the young stork was not injured, and such falls are usually fatal. During the past few days, the animal keepers have been feeding and observing the young stork in the Zurich Zoo’s bird breeding station.

“During the course of the ringing campaign, an animal keeper was able to place the chick back in the eyrie with its siblings.”