The species, known as Canis lupus familiaris, made it to Europe about 10,000 years ago.
By Darko Manevski June 10, 2022
Facebook
Twitter
Linkedin
Email 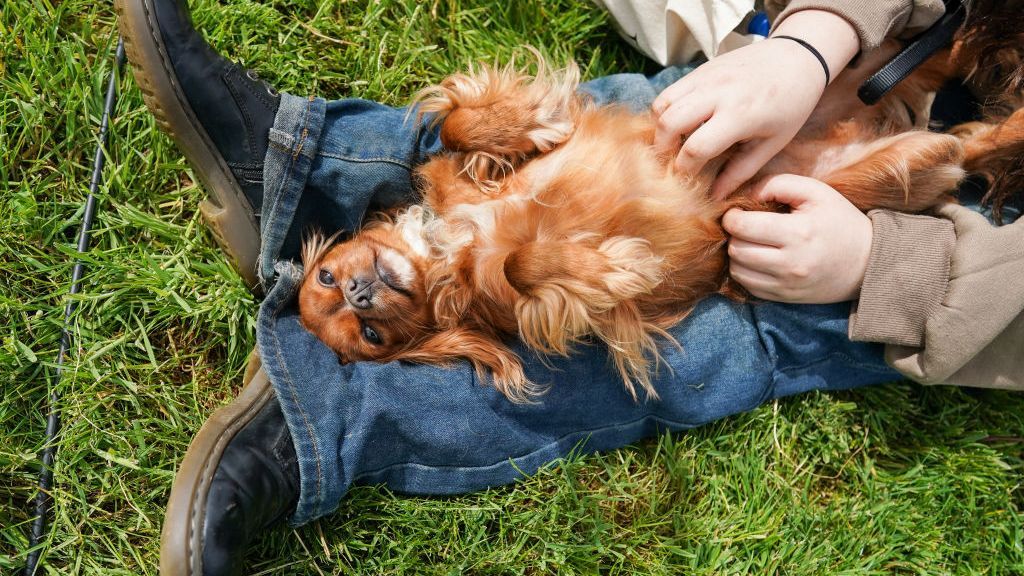 Dogs and their owners attend on the first day of the Festival of Dogs weekend at Castle Howard on May 21, 2022 in York, England. (Photo by Ian Forsyth/Getty Images)

Dogs became man’s best friend thanks to a gene that lowered stress, according to new research.

It made dogs more relaxed around people – enabling the special relationship to develop.

Now a Japanese team reckon they have solved the riddle. Dogs carry two mutations of a gene known as MC2R (melanocortin 2 receptor).

It produces the hormone cortisol – nature’s built-in alarm system which is released during fear or anxiety.

Co-author Professor Miho Nagasawa of Azabu University said: “These findings imply MC2R played a role in the domestication of dogs, perhaps by promoting lower levels of stress around humans.”

Man’s proverbial first best friend was a grey wolf that made contact with its first human companions about 33,000 years ago, somewhere in Southeast Asia.

About 15,000 years ago, a small pack of domesticated dogs began trotting towards the Middle East and Africa.

The species, known as Canis lupus familiaris, made it to Europe about 10,000 years ago. Humans began to build farmsteads and villages with walls – the dawn of civilization.

Dogs were already there to help keep guard and herd the first flocks – and demanded to be taken for a walk. The outlines of the great adventure are written – in DNA.

In time, the animals became loved by their owners – in the same way as they loved their families.

To investigate the phenomenon Nagasawa and colleagues ran experiments in which 624 domestic dogs were split into ancient and modern, or ‘general,’ breeds.

They found the former felt less attached to the testers than the latter – because of the MC2R variants.

“During domestication, dogs experienced strong selection for temperament, behavior, and cognitive ability. However, the genetic basis of these abilities is not well understood.

“In a problem-solving task, ancient breeds showed a lower tendency to look back at humans than other European breeds.”

The former group consisted of those considered genetically closer to wolves such as the Akita and Siberian Husky.

Others such as gun dogs, mastiffs and Jack Russell terriers, are more distantly related. All participants were recruited voluntarily from their owners.

Blood samples showed changes to the MC2R gene were associated with correctly interpreting gestures and gazing at the experimenters more often.

There were no differences in other genes – including those for the ‘bonding’ hormone oxytocin and another linked to hyperactivity.

“The results show both groups have capabilities in understanding human gestures and adjusting their responses accordingly.

“In contrast, the general group showed higher eye-contact behavior in the problem-solving test.

“This suggests the capability of dogs to understand human commands and adjust their own behavior accordingly evolved early in the domestication of dogs.

“The stronger tendency of gazing at humans, as tested by the problem-solving test, was a desirable characteristic that was intentionally chosen for, through human-selected breeding, after dogs had evolved.”

Dogs’ emergence has been tracked back to wolves scavenging leftovers discarded by early humans on the edges of settlements.

Over generations, their offspring became bolder still and ever closer to the people they relied on.

In time, humans saw the animals as natural allies and began breeding them to be better hunters and herders.

Nagasawa said: “Ancient wolf individuals that had low levels of fear and aggression started to approach human areas and evolved into dogs.

“It may have become necessary through the process of domestication for dogs to gaze at humans for instruction and initiate communication to build a more successful relationship.

“Furthermore, as even stray dogs that were not brought up in human households show this characteristic, it has been previously suggested there is a genetic component involved. Our results support this hypothesis.”

There are now more than 400 breeds of domestic dogs. The study is published in the journal Scientific Reports.