A study shows that rebuilding connections is not that easy for employees who've returned to working in the office.
By Martin M Barillas June 10, 2022
Facebook
Twitter
Linkedin
Email 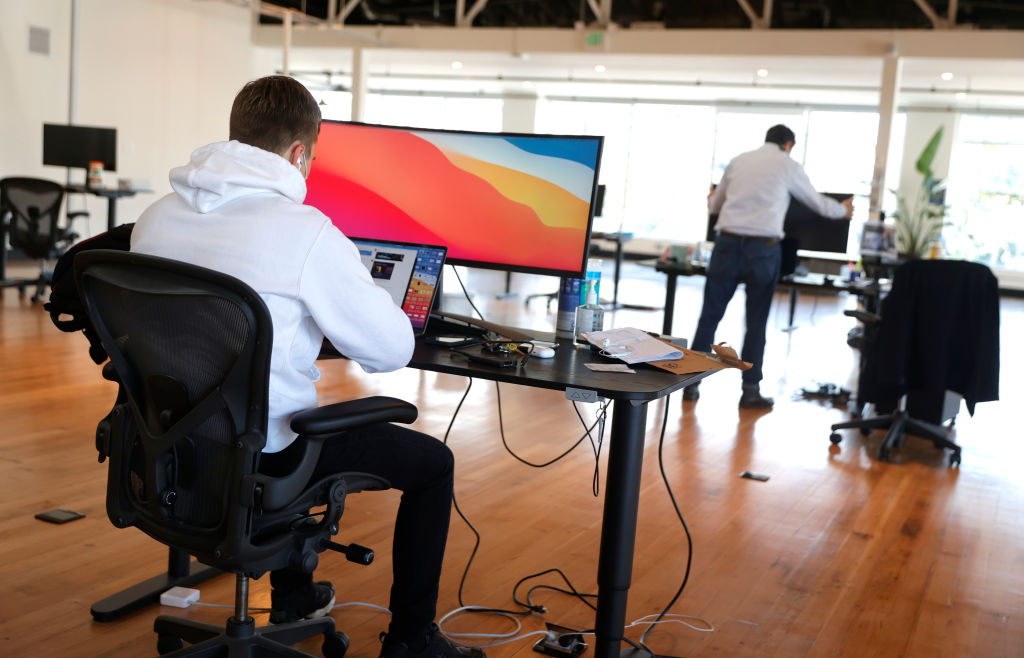 Vlad Lapich, with tech startup company Fast, works on his computer on the first day back in the office on March 24, 2021 in San Francisco, California. (Photo by Justin Sullivan/Getty Images)

CEOs hellbent on getting workers back in the office say that being physically together boosts connectivity. It turns out that’s not the case.

Only one in six people feel strongly connected at work, with on-site employees the least connected of all, according to a study by consulting firm Accenture Plc.

Some 22 percent of fully remote workers say they feel “not connected,” while the share for those in the office is nearly double.

The report backs some of the central logic executives like Citadel’s Ken Griffin cite to encourage their employees to return to the office.

While they say that boosts creativity and innovation, commuting is still expensive and can be fraught with challenges, especially for working parents struggling to find reliable and affordable child care.

“One might think a quick fix is simply to bring everyone back to work on-site and human connection will happen,” the report said. “It’s not that simple.”

With the tightest labor market in decades, many people who have successfully worked remotely for over two years are pushing back against a wholesale return to the office.

Workers at companies like Apple Inc. have rebelled, arguing they’re just as productive and much happier at home.

Part of the reason so many workers, especially those who are in the office full-time, are so disconnected is because they feel ignored by senior management, said Ellyn Shook, Accenture’s chief leadership and human resources officer.

“People want choice,” Shook said. “I really believe that dialing up listening and acting on what you hear can really address that.”

Some employers are rethinking their RTO plans altogether after two chaotic years of the virus’s twists and turns and a broad reckoning of work culture.

Credit Suisse Group AG Chief Executive Officer Thomas Gottstein doesn’t think banks will ever return to working full-time from the office, and Airbnb Inc. said last month that its employees would be permanently able to work from anywhere.

Feelings of disconnection among employees can hurt productivity and retention and hold real consequences for businesses’ bottom line.

The study — which surveyed 1,100 C-level executives and 5,000 workers across skill levels globally in the middle of last year — found that companies in which people feel highly connected stand to gain an extra 7.4 percent in revenue growth each year.

“If a business leader thinks this isn’t impacting their organization, they’re mistaken,” she said.