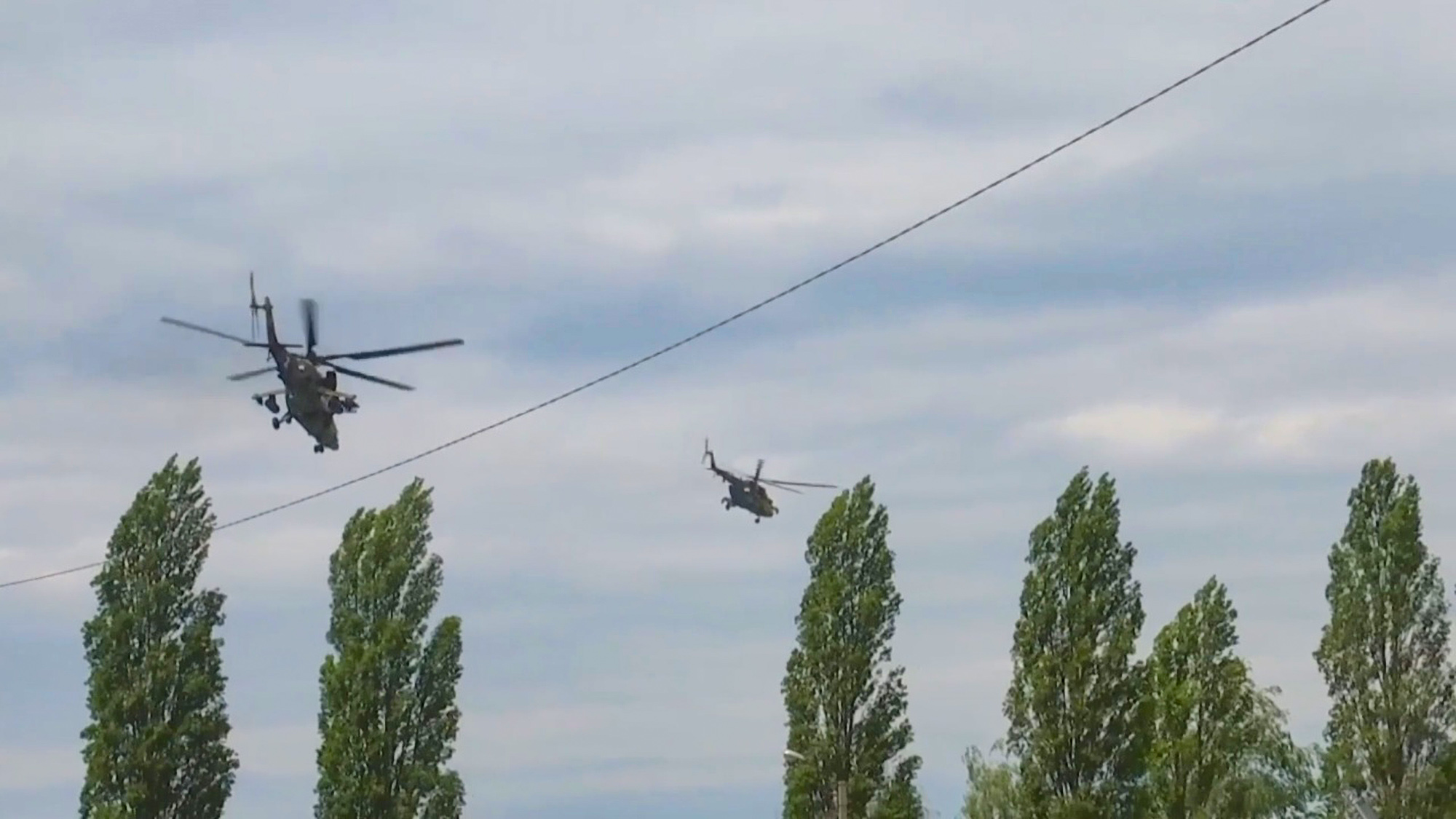 This is the moment Russian forces attack Ukrainian targets during the ‘liberation’ of the town of Sviatohirsk.

The Russian Ministry of Defense (MoD) said in a statement on June 8: “The Ukrainian group in the Donbas suffered significant losses in manpower, weapons and military equipment.

“During the liberation of Svyatogorsk [also written Sviatohirsk] in the Donetsk People’s Republic over three days of fighting, the losses of Ukrainian troops amounted to over 300 nationalists, six tanks, 15 armored combat vehicles of various types, 36 field artillery guns and mortars, four Grad multiple rocket launchers and over 20 automotive units.

“Air-launched high-precision missiles in the Kharkiv region hit an armored plant with workshops used for the repair and restoration of tanks and other armored vehicles of the Armed Forces of Ukraine.

“In addition, high-precision air-launched missiles hit two command posts, 13 areas of concentrated manpower and military equipment of the Armed Forces of Ukraine, as well as a battery of ‘Hurricane’ multiple launch rocket systems in the Kharkov region.

“During the day, operational-tactical aviation hit 63 areas of concentrated manpower and military equipment of the Armed Forces of Ukraine. As a result of air strikes, the control center of the 14th Mechanized Brigade of the Armed Forces of Ukraine, with over 160 nationalists, eight tanks, two Grad multiple rocket launchers, an artillery battery, an electronic warfare station and 13 vehicles for various purposes, was destroyed.

“In addition, 11 Ukrainian unmanned aerial vehicles were shot down in the areas of the settlements of Donetsk, Rubtsy, Lozovoe, Krasnorechenskoe, Koroviy Yar, Peski-Radkovsky of the Donetsk People’s Republic, Izyum, Dergachi in the Kharkiv region and Chernobaevka in the Kherson region.

“Three missiles of the Tochka-U tactical complex and five rockets of the Smerch multiple launch rocket system were intercepted near Chernobaevka, Kherson region.

“Missile troops and artillery hit: 68 command posts, 172 artillery firing positions of the Armed Forces of Ukraine, including two batteries of Smerch multiple launch rocket systems in the area of Oleksandrivka and Kutuzovka, a battery of Uragan MLRS in the area of the settlement of Kitsevka, Kharkiv region, as well as 261 areas of concentrated manpower and military equipment of the Armed Forces of Ukraine.

“As a result of the strikes, over 320 nationalists, four ammunition depots in the district of Novolenovka in the Zaporozhye region, nine armored vehicles, three Grad multiple rocket launchers, 15 field artillery guns and mortars, 14 special vehicles, as well as combat vehicles of anti-aircraft missile systems were destroyed.”

The Russian MoD added: “In total, since the beginning of the special military operation, the following have been destroyed: 192 aircraft, 130 helicopters, 1,150 unmanned aerial vehicles, 335 anti-aircraft missile systems, 3,459 tanks and other armored combat vehicles, 489 multiple rocket launchers, 1,822 field artillery and mortar guns, as well as 3,488 units of special military vehicles.”