They play covers of their favorite artists at the moment - but have just started writing their own tunes.
By Darko Manevski June 9, 2022
Facebook
Twitter
Linkedin
Email 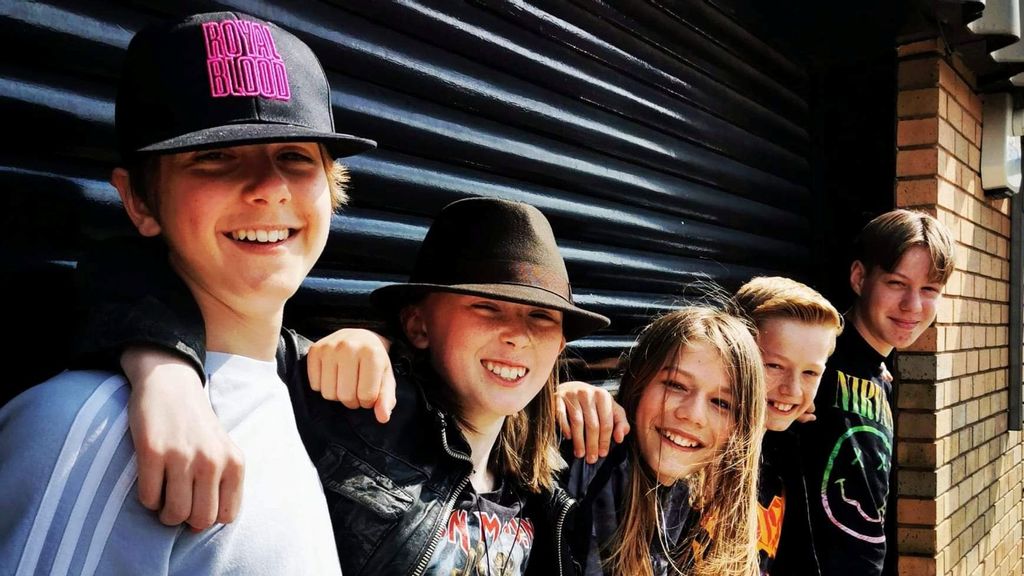 Meet one of Britain's youngest rock bands - who formed aged just NINE and play gigs across the UK. (Mark Collingwood/Zenger)

Meet one of Britain’s youngest rock bands – formed when the members were just NINE years old — that plays gigs across the United Kingdom.

Beyond The Sons met through their music teacher three years ago and now practice religiously every Saturday near their homes in Newbury, Berkshire, in south-central England.

The group – with an average age of 13 – are already accomplished performers, and took to the stage last weekend to celebrate the Platinum Jubilee.

They play covers of their favorite artists at the moment – but have just started writing their own tunes.

Mark Collingwood, 44, stay-at-home dad to Jake, helps out with the band.

He said: “They sound amazing, for any age. I knew straight away they had something good.

“I expect they’re the youngest independently formed rock band in the UK. They just lucked out on finding each other.

“They’re all talented and so dedicated and they’re such a great bunch. Leo saw something in each of them and it’s worked out as a group.

“I’m immensely proud of them all and very excited for them.”

Jake, who looks every inch the rocker in his hat and leather jacket, started formal lessons at age nine, and was talent-spotted by teacher and band manager Leo Westby.

“He’s [already] playing some of the most technical stuff in the world, like Jason Becker.”

Jake said: “I just love the energy of rock music.

“I just want to play my guitar live and loud, and travel the country doing gigs and festivals.”

“I’d love for the band to be big and successful, but most of all I want to perform at gigs and record more tracks.”

He said: “I love that our band is making rock fun for others, and I love showing our videos.

And drummer Albert, who turns 14 today, June 8, continued: “I love creating music in the band – I can’t wait to see where it takes us.”

Finally, Ethan, on rhythm guitar, said: “Band practice is the best part of my week – I’d love to perform at a festival in front of lots of people.”

Jake, Ethan and Hayden were the original band members, followed by Albert and Hector.

The group suffered during COVID, with gigs canceled and restrictions making it difficult to practice.

But Beyond the Sons rocked the stage at a Platinum Jubilee event in Cold Ash, Berkshire, on Saturday, June 4, performing 10 songs in an 80-minute set.

They are now looking forward to performing at other events this summer, including the Chilli Festival in Reading, Berkshire, on June 18 and at Beastival in Portsmouth, Hampshire, on the shore of the English Channel on July 9.

Hayden’s mum Sam Horrix, 33, said: “They’re amazing, and so hard working and talented. Adults struggle with the music they are playing.

“Their grit and determination through all the lockdown knockbacks has been incredible.”