The Volunteers for the Defense of the Fatherland group is seen as a stop-gap measure to halt a spreading conflict. 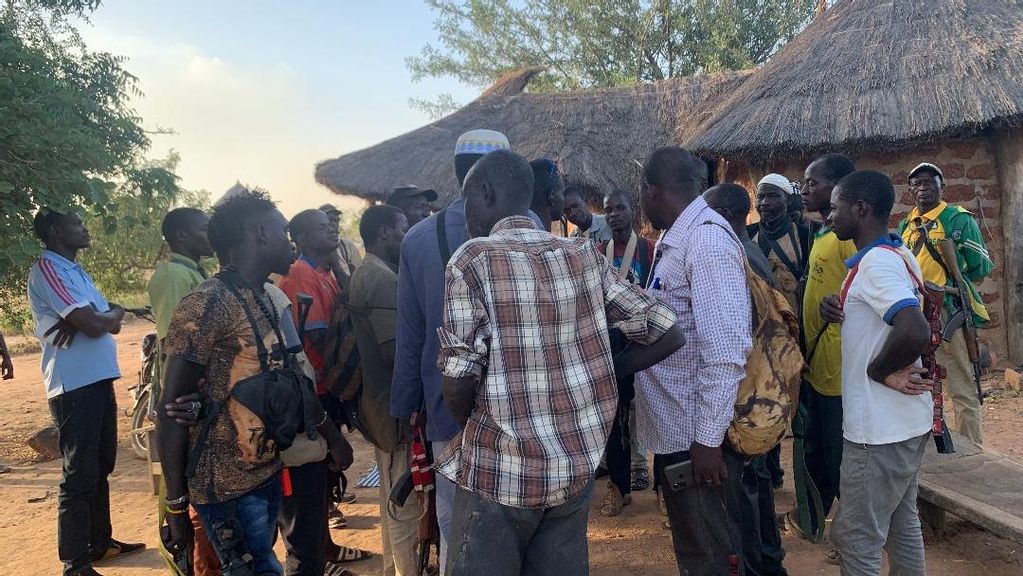 The VDP, a self-defense militia, draws from a variety of ethnic groups in Burkina Faso. Its members include Muslims, Christians and animists. (Joseph Hammond)

The ongoing insurgency that has raged across much of Burkina Faso, a landlocked country in West Africa, has brought misery and suffering to the nation of 21 million.

Visible reminders of the struggle are everywhere. A burned-out truck has become an unlikely playground for children. Another charred vehicle sits on the edge of a field of maze.

Kibsa Ouedraogo, who has a swagger General Patton would admire, heads a local militia group, Volunteers for the Defense of the Fatherland (VDP). It has clashed with terrorists across Burkina Faso’s North Central region since its founding in 2020.

While the press often focuses on various international efforts involved in the conflict, localized militias have increasingly taken on larger roles in the ongoing struggle.

The Volunteers for the Defense of the Fatherland is seen as a stop-gap measure to halt a spreading conflict. For critics, it’s a symptom of a conflict increasingly reflected in ethnic terms. To their terrorist opponents, VDP militias are potential soft targets.

“We will be ready for them if they come, we’ve prepared a little surprise for them,” Ouedraogo says in French, pointing to a series of slit trenches dug in front of a half-finished schoolhouse. The site offers clear fields of fire onto a road, which leads to a nearby village.

Nearby Kaya, one of the country’s cities, has seen its population swell as thousands have fled their to flee the conflict. Overall, the conflict has internally displaced as many as 1.5 million people.

Armed Conflict Location and Event Data Project (ACLED) reported that last year, Burkina Faso saw a record numbers of deaths. While thousands have perished in the conflict so far, a single incident on June 5, 2021, was the conflict’s bloodiest day: 160 people were killed.

Even the largely stable area between the capital, Ouagadougu, and northern Ghana saw attacks last year. Many of the coastal countries in West Africa are worried the instability will spread within their borders.

The instability has helped put pressure on the government. A number of population centers like Kaya have seen anti-government protests in recent months. One of the demands of some protestors is better support for the VDP. President Roch Marc Christian Kabore accepted the government’s resignation in December, only to be deposed in a coup by members of Burkina Faso’s military the following month.

The situation is being watched by U.S. officials.

“We acknowledge the tremendous stress on Burkinabé society and security forces posed by ISIS and JNIM, but urge military officers to step back, return to their barracks, and address their concerns through dialogue” the U.S. Dept. of State said on news of Kaboré’s detainment in late January.

While international observers have pointed to human-rights abuses conducted by such groups, most Burkinabe interviewed by Zenger spoke positively about the VDP.

“If you want to do bad things, you’re going to join the terrorists,” said Mo Campore, a trader in Ouagadougou. “You’re not going to spend your life working as a farmer and then maybe hope you have a chance to do a bad thing by joining the VDP.”

Though some Western observers have criticized certain VDP groups for leading reprisals; the conflict is often seen as ethnic vs. ideological.

The Fulani, a tribal group whose nomadic customs have spread their population across West Africa, are frequently blamed by many Burkinabe of other ethnic groups for the terrorism. VDP groups have been accused of retaliating against Fulani for attacks.

The charge is belied by the facts on the ground. The unit of VDP visited by Zenger consisted of members of both Mossi and Dioula ethnic groups, as well as members of the country’s three main religions: Christians, traditional animists and Muslims. There are also groups of VDP that are entirely Fulani.

Until late 2020, Colonel Barry Auguste Denise was the country’s security minister. He is one of its most respected politicians, given his role in providing stability following the overthrow of longtime President Blaise Campore in 2014. For him, the creation of the VDP, which happened after he left office, is part of an unfortunate situation.

“This disturbing trend puts Central Mali on a pathway toward an endless cycle of violence and an increase in civilian casualties,” Denise told Zenger. Citing a position paper he wrote on the Burkinabe national security, he warned that the creation of such groups could lead to “polarized identities, a militarization of local communities, and the normalization of violence as a political tool.“

Other countries in the Sahel, a region separating the Sahara Desert to the north and tropical savannas to the south, have formed similar units to fight insurgent groups.

Niger hasn’t formalized it, but a program is underway to get people in problem areas to join its National Guard. In Mauritania, authorities have resurrected a camel corps to help patrol the Sahara. In neighboring Mali, an analysis of similar community-based armed groups (CBAGs) has, according to Sahel analyst Rida Lyammouri, created “the legitimization of CBAGs as security providers positioned to maintain at least partial community support. Current dynamics between the different communities foresee an ascendant trend in violence if no deescalation initiatives are undertaken.”

But for a country like Burkina Faso, there are often few options. As late as 2018, it spent the least on security of the G5 Sahel countries and was second only to Chad as the poorest in GDP per capita terms.

Back at the VDP drill, the sun begins to wane. Those in charge end the drill to avoid having single armed men walk home in darkness. A few had come to the event on motorcycles. Before dismissing them for the day, Ouedraogo rallies his men with some inspirational words.

“[Foreigners] don’t love each other, they don’t hate each other. It is their interest that interests them,” Ouedraogo says as some of his men chuckle. “Yet they don’t want us to have this same concept of “interest.” &mldr;. In truth, we aren’t motivated by [short-term] interests. We will always be here.”