World First: Doctors Take Out Patient’s Damaged Liver And Transplant It Back After Treating It

The multidisciplinary Liver4Life team has claimed that the procedure is the first of its kind in the world.
By Joseph Golder June 8, 2022
Facebook
Twitter
Linkedin
Email 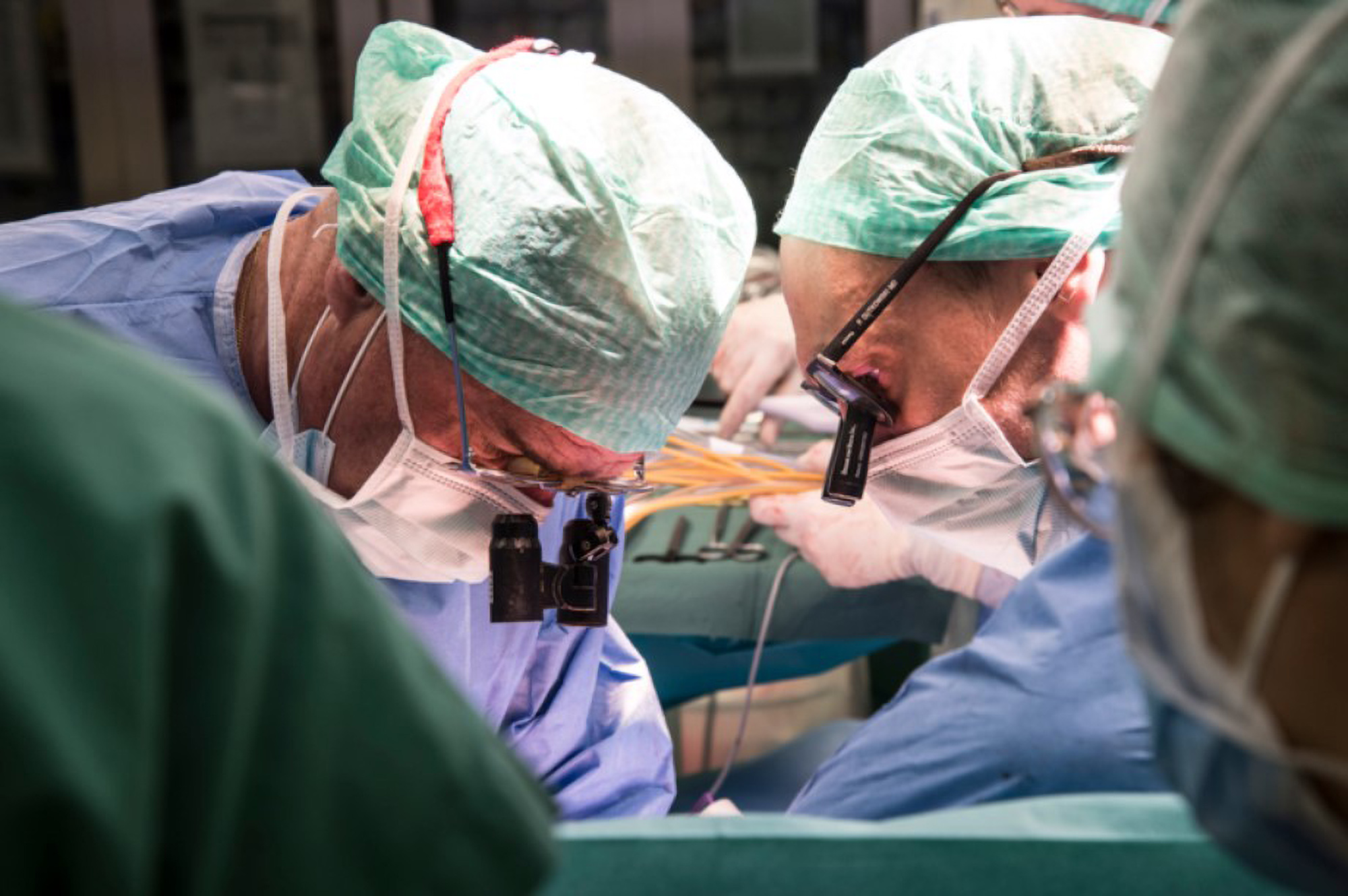 Prof. Pierre-Alain Clavien and Prof. Philipp Dutkowski during the transplantation of the liver treated in the machine. (USZ/Zenger).

Doctors in Switzerland have successfully removed a cancer patient’s damaged liver before transplanting it back into their body having treated the organ in a machine for three days.

The multidisciplinary Liver4Life team at the University Hospital Zurich (USZ) has claimed that the procedure is the first of its kind in the world and they credited their in-house perfusion machine with making the feat possible.

The USZ said in a statement on Tuesday, May 31: “The multidisciplinary Zurich research team Liver4Life has succeeded in doing something during a treatment attempt that had never been achieved in the history of medicine until now: it treated an originally damaged human liver in a machine for three days outside of a body and then implanted the recovered organ into a cancer patient.”

They added: “One year later, the patient is doing well.”

They also said: “The Liver4Life research team owes its perfusion machine, which was developed in house, to the fact that it became possible to implant a human organ into a patient after a storage period of three days outside a body.”

They said that the machine mimics the human body very accurately so as to provide the best conditions possible for human livers. They added: “A pump serves as a replacement heart, an oxygenator replaces the lungs and a dialysis unit performs the functions of the kidneys.

“In addition, numerous hormone and nutrient infusions perform the functions of the intestine and pancreas. Like the diaphragm in the human body, the machine also moves the liver to the rhythm of human breathing.”

In January 2020, the multidisciplinary Zurich research team, with the collaboration of University Hospital Zurich (USZ), ETH Zurich and the University of Zurich (UZH), demonstrated that the experimental procedure was theoretically possible, and now they have shown “for the first time that perfusion technology makes it possible to store a liver outside the body for several days.”

They explained: “The team prepared the liver in the machine with various drugs. In this way, it was possible to transform the liver into a good human organ, even though it was originally not approved for transplantation due to its poor quality.

“The multi-day perfusion, i.e. the mechanical circulation of the organ, enables antibiotic or hormonal therapies or the optimization of liver metabolism, for example. In addition, lengthy laboratory or tissue tests can be carried out without time pressure.

“Under normal circumstances, this is not possible because organs can only be stored for 12 hours if they are stored conventionally on ice and in commercially available perfusion machines.

“As part of an approved individual treatment attempt, the doctors gave a cancer patient on the Swisstransplant waiting list the choice of using the treated human liver. Following his consent, the organ was transplanted in May 2021. The patient was able to leave hospital a few days after the transplantation and is now doing well.”

The patient, who has not been named, said: “I am very grateful for the life-saving organ. Due to my rapidly progressing tumor, I had little chance of getting a liver from the waiting list within a reasonable period of time.”

Pierre-Alain Clavien, Director of the Department of Visceral Surgery and Transplantation at the University Hospital Zurich (USZ), said: “Our therapy shows that by treating livers in the perfusion machine, it is possible to alleviate the lack of functioning human organs and save lives.”

Mark Tibbitt, professor of macromolecular engineering at ETH Zurich, added: “The interdisciplinary approach to solving complex biomedical challenges embodied in this project is the future of medicine. This will allow us to use new findings even more quickly for treating patients.”

The Zurich hospital had previously said in 2020: “Until now, livers could be stored safely outside the body for only a few hours. With the novel perfusion technology, livers – and even injured livers – can now be kept alive outside of the body for an entire week.

“This is a major breakthrough in transplantation medicine, which may increase the number of available organs for transplantation and save many lives of patients suffering from severe liver disease or a variety of cancers. Injured cadaveric livers, initially not suitable for use in transplantation, may regain full function while perfused in the new machine for several days.

“The basis for this technology is a complex perfusion system, mimicking most core body functions close to physiology. The corresponding study was published on January 13 in the journal Nature Biotechnology.”

Professor Clavien said at the time: “The success of this unique perfusion system – developed over a four-year period by a group of surgeons, biologists and engineers – paves the way for many new applications in transplantation and cancer medicine helping patients with no liver grafts available.”

The USZ explained in 2020: “When the project started in 2015, livers could only be kept on the machine for 12 hours. The seven-day successful perfusion of poor-quality livers now allows for a wide range of strategies, e.g. repair of preexisting injury, cleaning of fat deposits in the liver or even regeneration of partial livers.”

The USZ said: “The Liver4Life project was developed under the umbrella of Wyss Zurich institute, which brought together the highly specialized technical know-how and biomedical knowledge of experts from the UniversityHospital Zurich (USZ), ETH Zurich and the University of Zurich (UZH).”

Professor Philipp Rudolf von Rohr, professor of process engineering at ETH Zurich, said: “The biggest challenge in the initial phase of our project was to find a common language that would allow communication between the clinicians and engineers.”

The USZ added: “The inaugural study shows that six of ten perfused poor-quality human livers, declined for transplantation by all centers in Europe, recovered to full function within one week of perfusion on the machine. The next step will be to use these organs for transplantation. The proposed technology opens a large avenue for many applications offering a new life for many patients with end-stage liver disease or cancer.”

And now the next step in the Liver4Life project is to “review the procedure on other patients and to demonstrate its efficacy and safety in the form of a multicenter study”.

The USZ said: “Its success would mean that in the future, a liver transplantation, which usually constitutes an emergency procedure, would be transformed into a plannable elective procedure. At the same time, a next generation of machines is being developed.

“In addition, those involved in basic research continue to look for ways of treating other liver diseases outside the body with drugs, molecules or hormones.”