The footage was obtained from the Ministry of Defense (MoD) of the Russian Federation on Sunday, June 5.
By William McGee June 8, 2022
Facebook
Twitter
Linkedin
Email 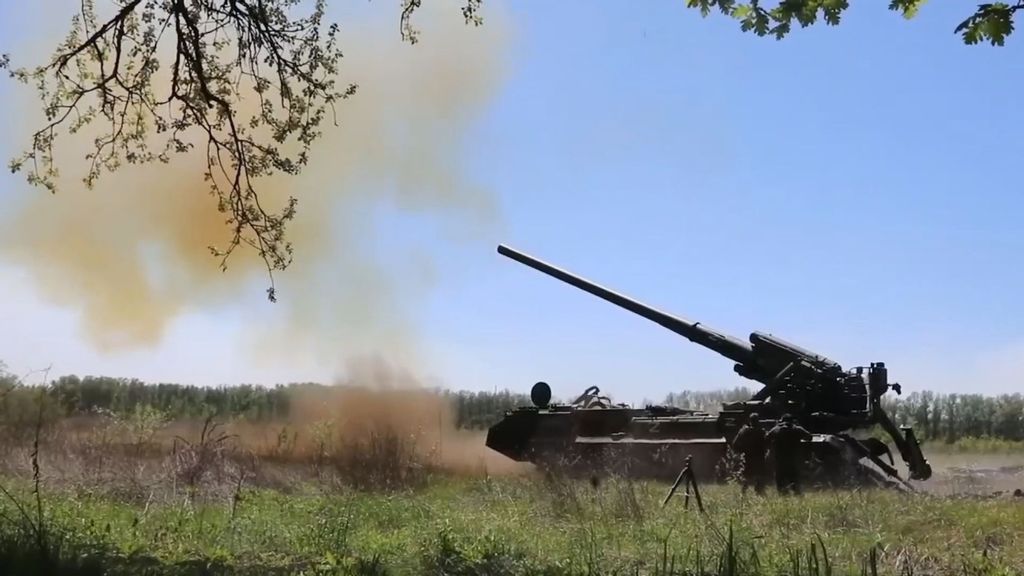 Combat work of the crews of the 203-mm Pion self-propelled artillery mounts in a wooded area in Ukraine. (Ministry of Defense of Russia/Zenger)

Released by the Russian Ministry of Defense, the video footage opens with the artillery pieces, which are daubed with white ‘Z’ symbols, being loaded with shells as they sit in a field.

The footage ends with the artillery pieces being discharged, reportedly at Ukrainian military positions, which are not shown in the video.

The footage was obtained from the Ministry of Defense (MoD) of the Russian Federation on Sunday, June 5.

“Artillerymen destroyed equipped firing positions and observation posts of the Ukrainian Armed Forces deployed in a wooded area. The artillery was guided by UAVs.

“After the firing, the battery moved to reserve positions to eliminate the possibility of enemy retaliation.

“203-mm Pion fired high-explosive fragmentation shells at a range of up to 30 kilometers.”

The 2S7 Pion is a Soviet self-propelled heavy artillery that entered service in 1976 and was last produced in 1990.

It is operated by a handful of militaries, including the Ukrainian military, in addition to the Russian one.

In a briefing earlier on Monday, June 6, the Russian MoD said (in English): “In total, 190 Ukrainian aircraft and 129 helicopters, 1,127 unmanned aerial vehicles, 330 anti-aircraft missile systems, 3,424 tanks and other armored combat vehicles, 473 multiple launch rocket systems, 1,795 field artillery and mortars, as well as 3,446 units of special military vehicles were destroyed during the operation.”

Russian President Vladimir Putin has warned more attacks in Ukraine can be expected if the West sends long-range weapons to Kyiv.

Russian missiles struck Kyiv on June 5 in the first assault on the Ukrainian capital in weeks.

Ukraine is claiming that it has retaken half of the key eastern city of Sievierodonetsk, where much of the fighting has been focused recently.

And the Ukrainian Armed Forces said on June 6 that Russian forces are continuing their push toward the city of Sloviansk.