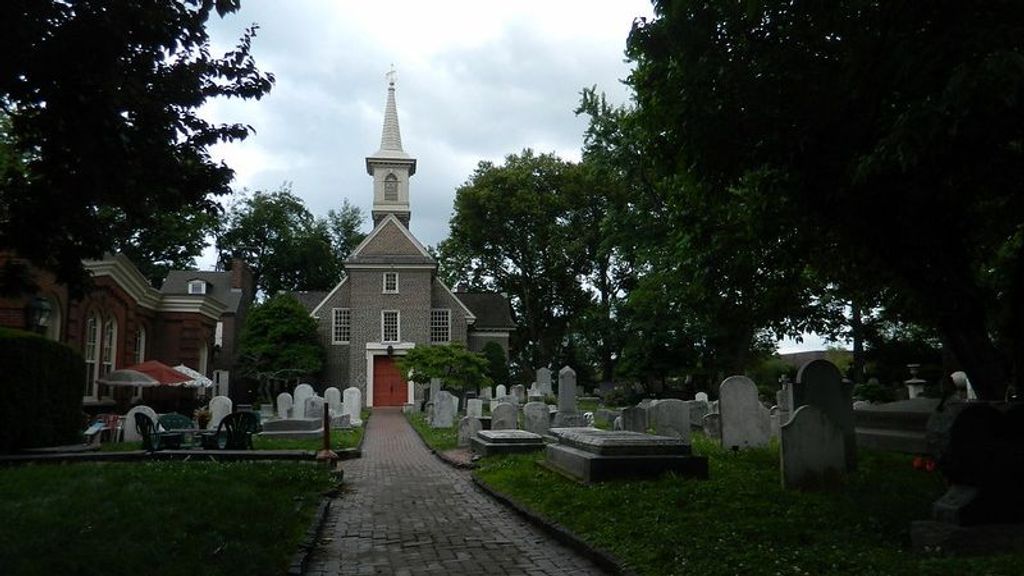 In the United States, Gloria Dei Episcopal is the oldest church building that remains standing as built. (Frank Holleman/Flickr)

Schoolchildren know about the Puritans and New England. But they rarely learn about New Sweden — an important religious community in colonial America’s history.

Inside the oldest church building in Pennsylvania, Woehr stands next to a wooden church pew painted white — sixth from the front on the right side.

It is the pew where her grandmother, her mother and she worshipped their entire lives.

Swedish Lutherans built the church between 1698 and 1700 and worshipped along the Delaware River for several generations before Gloria Dei became part of the Episcopal Church in 1845.

The Swedish Lutheran services have many similarities to the Episcopal Church, but differ from German Lutheran services, said Woehr. The church symbolizes a unique chapter in American religious history and the valuable contribution Swedes made to religious freedom and racial tolerance in America.

In the United States, this is the oldest church building that remains standing as built. It’s been in use for worship for more than 320 years.

This is the church where Woehr married her husband, Rich. It’s the church her family has attended since 1820. She plans to remain a pillar of the church, sharing its history with future generations.

On a cold Sunday morning in February, roughly 16 people attend the service at Gloria Dei. Almost everyone is over 50.  Woehr says the church usually has 50 people in attendance on a Sunday morning, including several families with children.

While less than one-third of the pews are full, the church does not feel dead, like other dwindling mainline churches. Rather, its congregants retain a sense of pride and purpose.

One parishioner wears a Scandinavian sweater with blue and white colors. Others wear sweatshirts and Philly-style stocking caps to stay warm. Members give announcements with enthusiasm. Stained-glass windows at the front dapple light onto wide-planked wood floors and across the colonial white wainscoting, pews and balcony. Historical rules mean the walls are not easily repainted. Inside the sanctuary, a model of the Kalmar Nyckel and another model of the Fogel Grip — the two ships that first brought settlers from Europe to the colony of New Sweden — hang from the rafters and dangle over the sanctuary.

The interim pastor, the Rev. Koshy Mathews, wears white robes with a green sash as he leads the congregation through hymns such as “We Gather in God’s Presence,” prayers and readings from Genesis, Psalms, 1 Corinthians and Luke.

During his sermon on the “Standard of Christian Ethic: God’s Mercy,” Mathews cites a specific passage that underscores his belief that “today’s environment is easily characterized as the enemy from within.”

He refers to the passage in Luke 6:27-38 (The Message edition by Eugene H. Peterson) that says:

“Love your enemies. Let them bring out the best in you, not the worst. When someone gives you a hard time, respond with the supple moves of prayer for that person. If someone slaps you in the face, stand there and take it. If someone grabs your shirt, gift wrap your best coat and make a present of it. If someone takes unfair advantage of you, use the occasion to practice the servant life. No more payback. Live generously.”

Mathews criticizes the modern culture of violence and said: “We make a merchant of hate.” He gently critiques political discourse in America and suggests Christ’s love and message provide a different method.

“This love is subversive,” he says. “This love frees enemies of their hatred.” He cites Mahatma Gandhi, Martin Luther King Jr., Vaclav Havel, Bishop Tutu and Nelson Mandela. “They all embody this Jesus love.”

He challenges the congregation to “embody this Jesus love command” as Christians living in the wealthiest and most powerful country on earth. He says it is not easy and refers to Thomas Merton’s words: “The root of Christian belief is not to love, but to understand we are loved.”

For those unable to hear his message in person, an iPhone on a tripod live-streams the church service. Woehr estimates perhaps half the congregation is tuning in from home, as the COVID-19 pandemic has ravaged church attendance. Yet it keeps an eye on the future.

“We want the kids involved, so they feel like they are part of the church and not kept in the back and meant to be quiet and play,” she said.

An ad for Gloria Dei in the fall 2021 issue of Queen Village Quarterly Crier said this is a church “where progressive Christianity is preached, black lives matter, LGBTQ+ rights are human rights, white supremacy is rejected, no human is illegal, science is real, love is love, and kindness is everything.”

Swedish history in the United States

Few Americans know the Swedish Empire once authorized a colony in the United States, which started in 1638 on the Delaware River — an area stretching from Wilmington, Delaware, to Philadelphia, Pennsylvania, and Trenton, New Jersey. It operated until 1655 in contention with early Dutch and British colonies. It was called “New Sweden.”

Unlike other early American colonies, the colonists of New Sweden got along well with American Indian tribes in the region. Historian Jean Soderlund, a professor emeritus at Lehigh University and a leading scholar on the Lenape Nation, said colonial scholars typically start their histories by focusing on Virginia and Maryland and ignore Pennsylvania until William Penn and the Quakers arrive in 1681.

Soderlund’s scholarship on the Lenape recognizes the importance of the earlier 17th-century settlements on the Delaware, particularly New Sweden.

New Sweden was “quite different from the Chesapeake and New England because the natives retained control,” Soderlund said in an interview with the University of Pennsylvania Press. “When the Dutch attempted to establish large-scale plantation agriculture at Swanendael (near Lewes, Delaware) in 1631, the Lenapes killed all its residents and demolished the colony.”

By contrast, Soderlund and other historians have said the Swedes and Lenape learned to ally with one another and oppose heavy-handed Dutch and English authority. The Lenape and the Swedes, according to Soderlund, “interacted on the basis of personal liberty, religious freedom, decentralized government, trade and peaceful resolution of conflict, thus creating the cultural platform on which the Delaware Valley Society grew.”

New Sweden is also notable in that no record of slavery in that colony exists, in contrast to colonial efforts by Spanish, Dutch and English explorers, who often used slaves to provide labor. Once, a Dutch ship captain dropped off a slave as a gift to the New Sweden colonists, and the Swedes, realizing that slavery was illegal in Sweden and that this slave, named Anthony, was a skilled sailor, made him an assistant to the governor and a ship pilot. They called him “Black Anthony.”

The first Old Swedes log church built along the Delaware in 1646 was led by a Lutheran pastor named Johan Campanius. Campanius taught himself the Lenape language, worked hard to build friendships with the Lenape tribes and invited members to Lutheran church services. Records indicate some took him up on the invitation. Campanius translated Martin Luther’s shorter catechism as the first book published in the Lenape language. That first log church lasted until 1688.

Another log church, built in 1677, was located in Wicaco on the south side of what later became Philadelphia. Swedes built Gloria Dei in 1700 to replace those early log churches, and Gloria Dei fostered a few daughter churches in the region.

Along with dozens of other descendants of New Sweden, nonprofits and history buffs, the authors documented the history of New Sweden via journals and events from the Swedish Colonial Society. Earlier Swedish and Finnish settlers in the region kept detailed records of their journeys, religious services and survival in the new world.

William Penn arrived in 1681 and bought land from Swedish settlers along the waterfront property near where Gloria Dei stands. Over time, the Swedes were forced to assimilate with the English Quaker government in Pennsylvania. Some Swedes retreated to New Jersey as Governor Penn wrested some of their land in Pennsylvania and imposed Quaker rules and norms on the Swedes.

Yet some descendants of New Sweden stayed in the Philadelphia area and became leaders of New England society. One grandson of New Sweden settlers, named John Morton, signed the Declaration of Independence. Woehr says her favorite historical pastor at Gloria Dei was Nils Collin, who served from 1784 to 1831. Collin was a close friend of Benjamin Franklin, who fastened his famous lightning rods to the church building.

The congregation switched from Swedish Lutheran to Episcopalian in 1845. Still, the congregation celebrates a Swedish holiday musical pageant each December known as Lucia Fest and St. Eric’s Fair, an event that includes a Scandinavian Christmas bazaar.

It is working to select a new rector, as Reverend Mathews is retiring soon. Ministers hired at Gloria Dei normally have long tenures, spending 30 to 40 years serving the parish.

A church as a museum

There is a plaque in Swedish in the back of the sanctuary that translates as “Glory to God in the highest.” In 1655, when this church held its first service, people from the Tinicum area of the Swedish colony — just south of land the Philadelphia International Airport now occupies — took ferry boats up the river to attend church. Gloria Dei is the oldest brick building in Pennsylvania. A Swedish flag stands in the back left corner of the church, and an American flag is in the back right corner.

There are various buildings on this five-acre property and a cemetery space in the center courtyard. Swedish American historian Amandus Johnson — who documented a good deal of the history we know about New Sweden — is buried in the cemetery. Woehr points out a tombstone that marks a member of George Washington’s army.

Woehr is proud her church has always been an early multicultural congregation, with minister Carl Wrangle in 1756 baptizing 29 African congregants. At the time, several colonial churches in Philadelphia recorded African Americans attending services.

However, a sore spot for Woehr and other members of the Swedish Colonial Society is the lack of knowledge about New Sweden, the original colony in the region. Many people know of William Penn and the Quakers — few know about New Sweden. They feel it is vital to highlight the lessons of religious freedom and peace with Indians that New Sweden supported.

Have their efforts to include New Sweden’s history in Pennsylvania schools succeeded?

“We are always an arrow on maps,” Woehr said with a sigh. “We feel at times like we are a stepchild.”

Paul Glader is executive editor of ReligionUnplugged.com and a professor of journalism at The King’s College NYC. He has reported from dozens of countries for outlets, including The Wall Street Journal, The Washington Post, Der Spiegel Online and others. He’s on Twitter @PaulGlader

«Previous Post
Travel Hacks: 22-Year-Old Entrepreneur Shares Tips On How To Travel In Style On A Budget»Next Post
‘We Must Pray With Actions’: Latino Church Leaders After Uvalde Shooting