Henry has become a friendly face to many of the patients and staff at Addenbrooke's Hospital in Cambridge.
By Simona Kitanovska June 8, 2022
Facebook
Twitter
Linkedin
Email 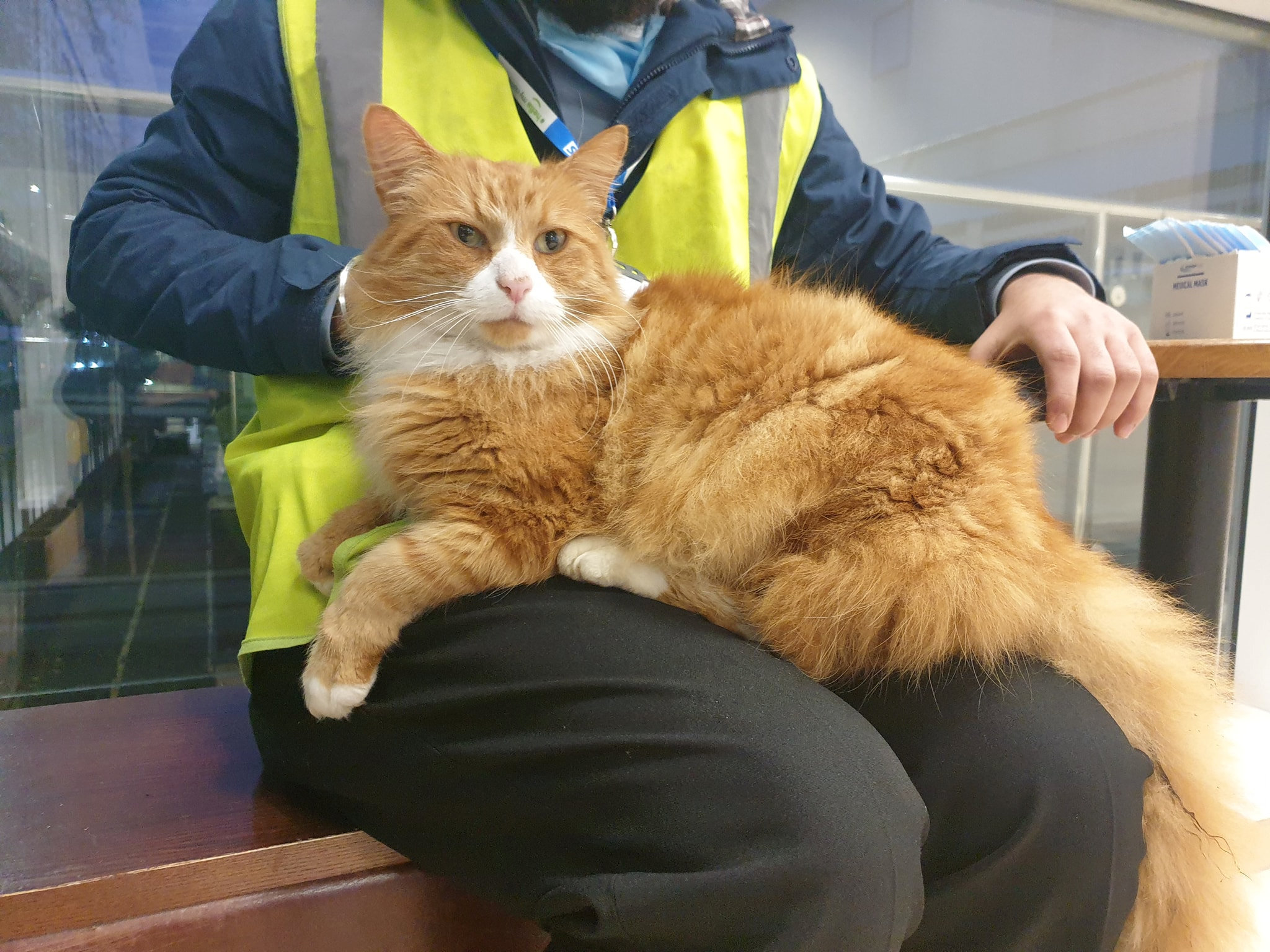 A special ginger cat called Henry has been stealing the hearts of thousands at a British hospital - after making it his second home for five years. (Matthew Newby/Zenger)

A special ginger cat called Henry has been stealing the hearts of thousands at a British hospital north of London – after making it his second home for five years.

Henry has become a friendly face to many of the patients and staff at Addenbrooke’s Hospital in Cambridge, England, and even has a Facebook group dedicated to his presence – with 4,900 followers.

The seven-year-old feline has hit the headlines following his frequent visits to the Cambridge hospital – bringing smiles and warm hugs to those who need it most.

One the many people singing Henry’s praises is recent mother-of-twins, Samantha Smith.

Samantha, 29, spent around eight weeks in the Sick Children’s Trust in Acorn House – a place for the families of sick children being treated at Addenbrooke’s Hospital.

Currently on maternity leave and from Stevenage, Hertfordshire in central England, Samantha said Henry gave her a “sense of comfort” while she was staying in hospital when one of her twins became seriously ill.

She explained: “Henry is such a gorgeous boy!

“When ever Lucas was having a bad turn he would always put a smile on my face and give me a sense of comfort as I was up there on my own.

“He was sort of like my go-to man you could say.

“I believe he definitely knows he is needed in that hospital in a special way”.

Ellie Freitas, who works at the hospital as a Health Care Assistant, first met Henry a year ago when she transferred to the hospital campus, as he would “often come visit and sit outside the hospital.”

She said: “I would walk to and from work to see this lovely orange fluffy cat just waiting there.

“On some days I would feel quite awful or just really low and he would just pop out of the nowhere and after a cuddle or two.

“I would set off feeling a bit brighter.

“I know for sure that he has brought a smile to many at the hospital, including many staff, patients and visitors.”

She added: “He really is quite special – he is so friendly and curious I often wonder if he really is a cat on the inside after all!”

Henry has been a blessing for old and young, patients, visitors and staff.

Lauren Davies, said she does not believe she would have made it through her last three weeks in the hospital due to her six-month-old daughter’s illness “if it were not for Henry.”

The 18-year-old college student and stay-at-home mother said: “Henry has made me smile and has given me positive attitude towards the day.

“He has allowed me to cuddle him and unload my struggles of the day to him – he is an absolute blessing and I don’t think I would get through the days without seeing him.

“Seeing Henry has made days which felt would never end a lot better.”

Amanda Crissall, who has has been working at the hospital for 18 years, says the cheeky cat is normally “waiting to be fussed at around 6:15 a.m. near our staff car park.”

The 50-year-old senior admissions coordinator says she “absolutely loves” Henry and “he is the first thing I see most mornings when I walk from the car park to my office”.

Henry’s owners, who wished to remain anonymous, said he had a loving home nearby.

They became aware of his “exploring” via social media.

“I would try to bring him home, but that never lasted more than a couple of days,” the owner said.

“It’s so nice that he’s making so many people happy – if he helps just one person [then] that’s more than many cats do.”

Many people have taken to Henry’s online group, which is almost at a following of five thousand, to post adoring messages and photos of the celebrity cat.

The group sets out to “keep up the morale of all at Addenbrooke’s.”

Heartfelt comments praise him for bringing them love during dark times.

One person wrote Henry “made my day having coffee and cuddles” when their sister was in hospital – the family had been told she had under 24 hours to live and was too sick for a liver transplant.

They said: “My sister is still alive and this was 5 years ago, she still doesn’t believe I sat cuddling him crying into my coffee and praying.

Another has said: “Cannot say what joy he brought to my daughters, to bring smiles after tears is a wonderful gift, Henry we love you.”

A Cambridge University Hospitals spokesperson said: “Henry the cat is very much a character and does seem to have found a place in the hearts of many of our staff and patients.

“However, for obvious reasons of infection control, no animals other than Pets As Therapy dogs and guide dogs are allowed in the hospital so please do not tempt him into the concourse with food or other treats, which are also bad for his health.”