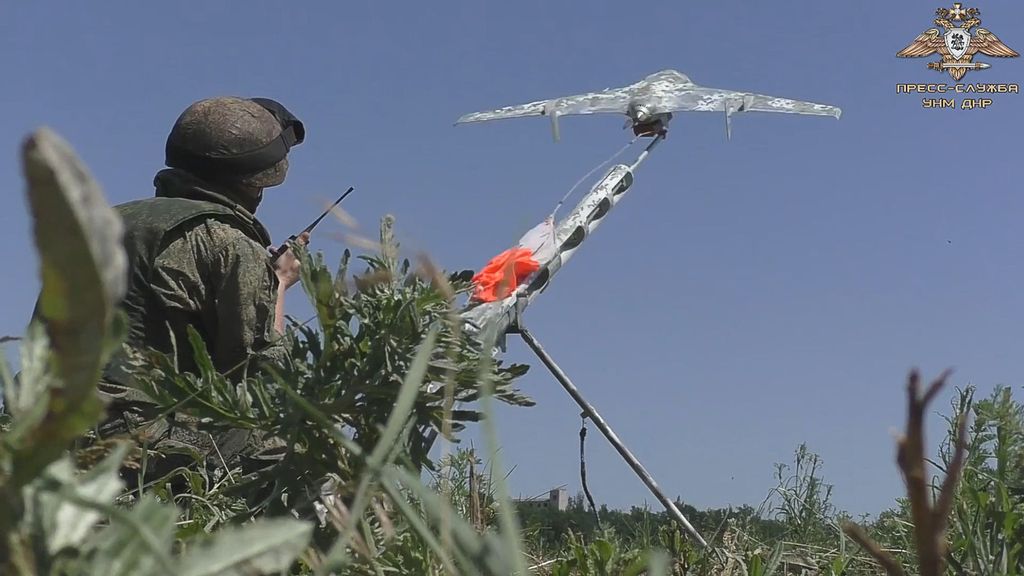 Artillery of the Peoples Militia of the DPR strikes enemy positions pointwise with help of unmanned aerial vehicles in June 2022. (Press Service of the UNM DPR/Zenger)

This is the moment when a video released by pro-Russian fighters identify Ukrainian targets with a drone before unleashing a devastating attack.

The People’s Militia of the so-called Donetsk People’s Republic (DPR) praised the benefits of unmanned aerial vehicles (UAVs) for reconnaissance work, allowing their troops to advance on enemy positions with effective cover.

The People’s Militia said on June 4: “In their combat work, artillerymen of the People’s Militia of the DPR closely cooperated with the operators of unmanned aerial vehicles, which allows us to not only detect enemy positions, but also to hit the manpower and fortifications of Ukrainian militants.”

A DPR commanding officer said: “Unmanned aerial vehicles are an integral element of aerial reconnaissance, because it is impossible to ensure high-quality advancement of troops without knowing what lies ahead, what awaits our fighters and their commanders.

“Without knowing the terrain, it is impossible to move forwards. We have experience using such drones for at least three years.

“They prove to be very effective, even for radio suppression. At this stage, we organize additional reconnaissance of enemy targets including their deployment sites, equipment sites, firing positions, and main strongholds.”

Last week, the Russian Ministry of Defense declared that its Yars mobile missile systems, which can carry nuclear warheads and which boast a reported range of over 10,000 kilometers (6,200 miles), were performing “intensive maneuvering operations on combat patrol routes in the Ivanovo Region,” east of the Russian capital Moscow.