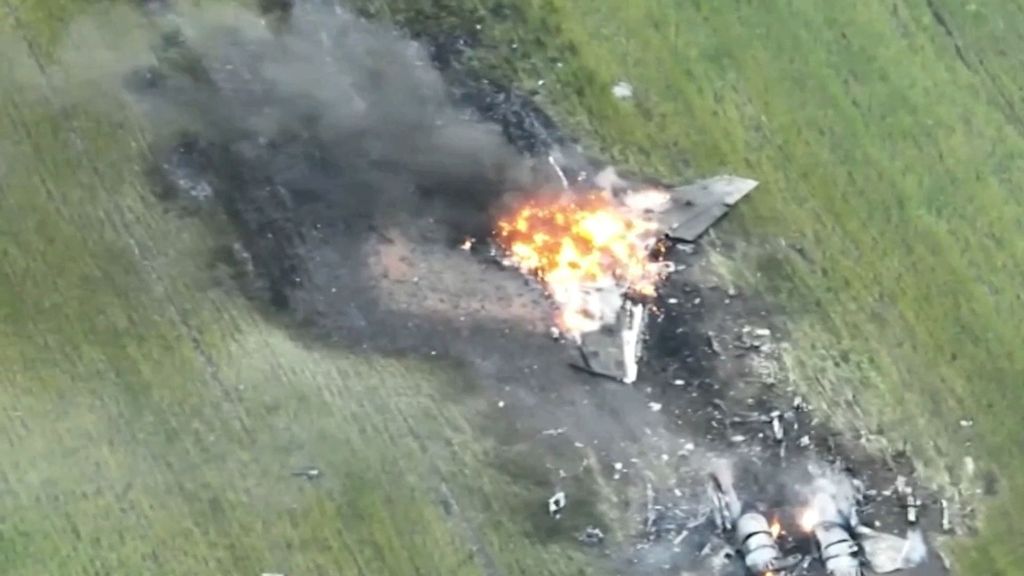 Russian air defense shot down MiG-29 fighter jet of the Ukrainian Air Force near Slavyansk, in June 2022. (Ministry of Defense of Russia/Zenger).

Russia claims it has shot down a Ukrainian MiG-29 fighter jet in the hotly contested Donbas region in eastern Ukraine.

The images, obtained from the Russian Ministry of Defense (MoD), appear to show a montage of various operations conducted by their forces. For a few seconds, the remains of what appears to have been a fighter jet can be seen on screen, with the aircraft wreck lying in a field.

The Russian MoD said in a statement Monday, June 6, as part of a wider briefing given by Major General Igor Konashenkov, 56, the chief spokesman for the Russian MoD: “The Armed Forces of the Russian Federation continue the special military operation in Ukraine.

“High-precision long-range air-based missiles of the Russian Aerospace Forces have destroyed industrial buildings of the smithy-mechanical plant on the outskirts of Lozovaya (Kharkov Region), where the AFU [Armed Forces of Ukraine] armored vehicles were being rebuilt and repaired.

The Russian MoD also said in its statement that Russian forces had destroyed a US-built counter-battery radar station.

It is unclear if this was a translation error, but the Sukhoi Su-29 is typically used to train pilots in aerobatics and for use in aerobatics competitions and air shows.

The MoD added: “Missile troops and artillery have hit 431 areas of manpower and military equipment concentration, and 34 firing positions of artillery and mortar units.

The United Kingdom has announced that it is sending its long-range missiles to Ukraine for the first time.