Police have not revealed what the coins were made of.
By Joseph Golder June 7, 2022
Facebook
Twitter
Linkedin
Email 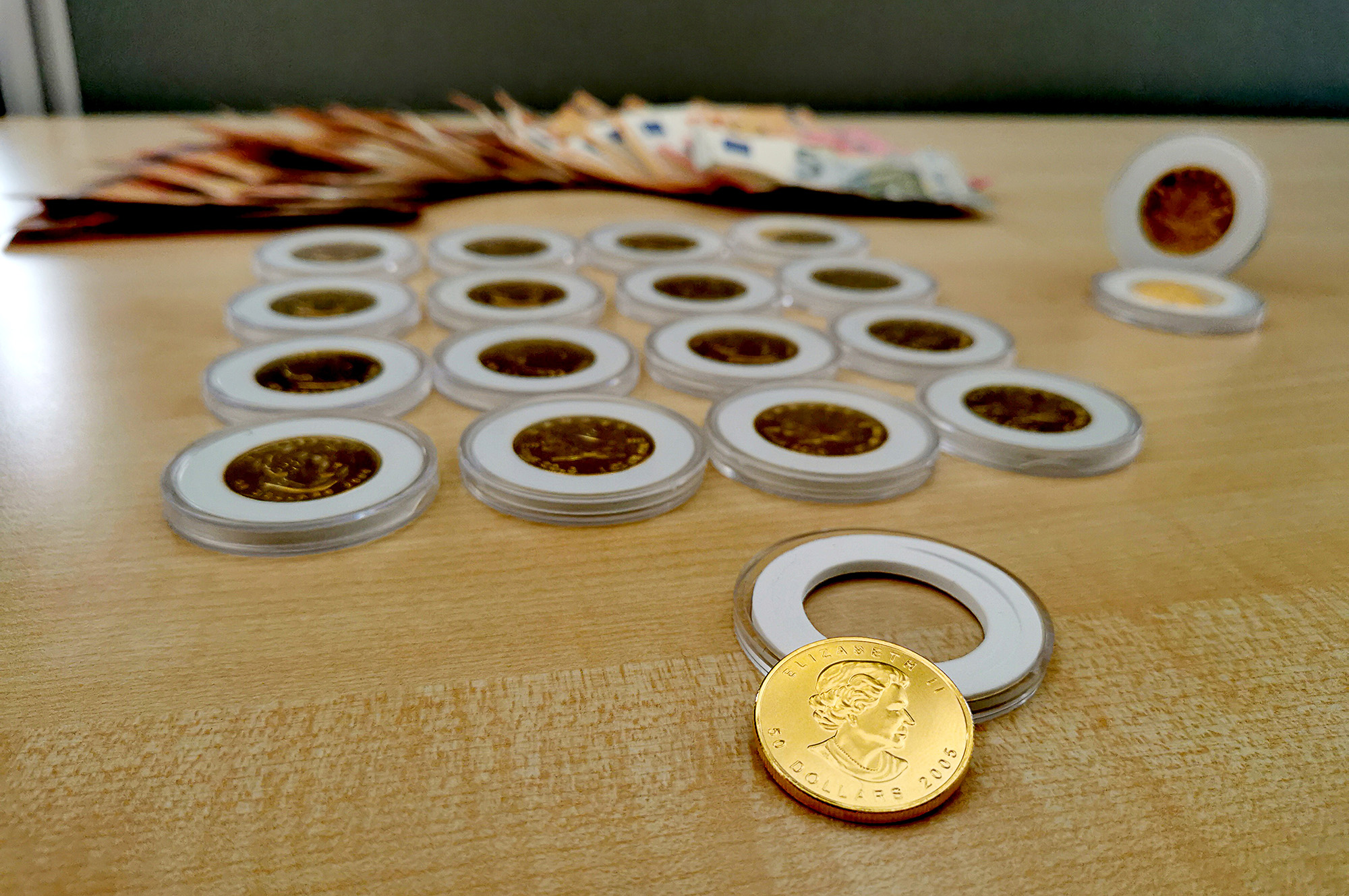 After months of investigations three men were arrested in Cologne on 2th of June 2022, and police seized 19 fake gold coins. (Polizeiprasidium Koln/Zenger).

Fraud police have busted scammers suspected of selling fake Canadian ‘Maple Leaf’ gold coins with the face of Queen Elizabeth II on them.

Cologne police headquarters in the western German state of North Rhine-Westphalia and the public prosecutor’s office said in a joint statement on Monday, June 6: “After months of investigative work, Cologne investigators arrested three men (30, 31, 51) in Cologne-Ossendorf on Thursday afternoon (June 2) and seized 19 fake gold coins and several 100 euros in cash.”

Police have not revealed what the coins were made of.

The authorities added: “The suspects are accused of having sold ‘gold coins’, which are still official means of payment in Canada, several times since the beginning of the year via an Internet portal and having cheated buyers out of around 80,000 euros” (85,825 dollars).”

The head of the investigation, Chief Inspector Dustin Hochkeppel, said: “We suspect there may be other victims who may not even know they have counterfeit gold coins in their vault.

“Anyone who has bought Canadian ‘Maple Leaf’ gold coins through unconventional channels, particularly through private classifieds, in recent months, should take steps to have their authenticity checked immediately. If forgery features are identified, you are asked to contact the police.”

Officials said the prime suspect is a 31-year-old from the city of Solingen, also in North Rhine-Westphalia.

He was already known to police over cases of fraud. The suspect has not been named due to strict local privacy laws.

He and his 30-year-old suspected accomplice – also unnamed but from Dortmund – are set to appear before a judge, still according to the police.

The police added: “The 51-year-old alleged accomplice is also from Solingen and was released after consultation with the public prosecutor.”

The German police said that people who believe that they may be victims of the fraud should contact them.

They said: “Other victims are asked to contact the investigators at Criminal Police Office 34 by telephone on 0221 229-0 or by email at [email protected]”

Gold has seen its overall value increase considerably over the last five years, going from approximately 1,200 dollars per ounce in October 2018 to approximately 1,850 dollars in May this year.

The Canadian Gold Maple Leaf is a gold coin produced by the Royal Canadian Mint and issued every year by the Canadian government.

The coins bear the face of Queen Elizabeth II on one side and a maple leaf on the other.

The Gold Maple Leaf is valid legal tender in Canada and has a face value of 50 Canadian dollars (39.77 dollars).

Its market value, however, varies depending on the price of gold.

At the time of writing, a one-ounce Maple Leaf Gold Coin was currently worth between 1,850 and 2,000 dollars.