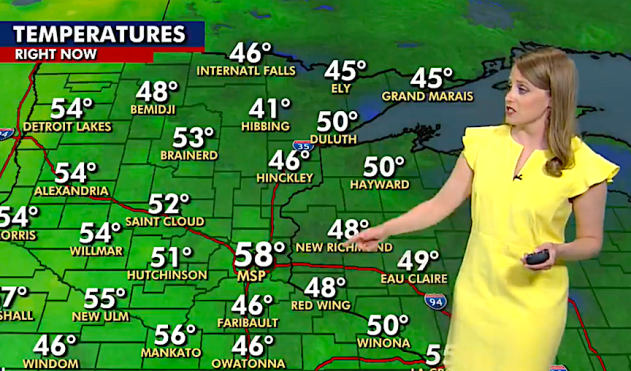 Twin Cities' FOX 9 meteorologist Jennifer McDermed is shown seconds before a technical malfunction caused multiple images of her to appear on screen.

Comic book superheroes may wish they could do what FOX 9 Meteorologist Jennifer McDermed, who forecasts the weather for the Twin Cities in Minnesota, did while delivering her forecast on Tuesday night.

While on the air delivering a forecast for what was a rather tranquil weather pattern, the graphics — and McDermed — began to glitch, creating a train of duplicates as she moved across the screen. The unexpected “visitors” in the weather forecast led to much amusement for McDermed, who was taken by surprise, and her off-screen colleagues.

“Oooh, that’s funky!” McDermed said when she caught on that something wasn’t right. Waving her arms and stepping off screen, a train of multiple images of herself followed her every move, but each had its own delayed response.

“Can you lead that train off the screen?” FOX 9 anchor Randy Meier asked at one point.

McDermed obliged, leading her duplicates across the screen just before the graphics came back online.

“I have no idea what that was, but that was brilliant,” McDermed said through her laughter. Reining in her composure, she continued delivering her forecast, albeit with a laugh or two left.

AccuWeather Executive Director of Content Operations David Taynor explained that the kind of glitch that is seen on the screen is actually pretty common in the TV business.

“When a broadcaster stands in front of a green screen, we use technology to remove the green and put something else in its place,” Taynor said. “Normally, that would be the weather graphics.”

Taynor theorized that in this case the image of the broadcaster was placed over her graphic behind her, causing a feedback loop.

“Basically, you are seeing her … over her… over her to infinity. And since it keeps layering in, you build in a little delay, so that’s why there were so many of her.”

McDermed herself even had some fun with it over social media, tagging Marvel Entertainment in a tweet asking, “Does this count as a super power?”