Researchers had a limited time to study traces a long-lost city on the floor of an Iraqi reservoir before the waters rose again.
By Zachary Rosenthal June 7, 2022
Facebook
Twitter
Linkedin
Email 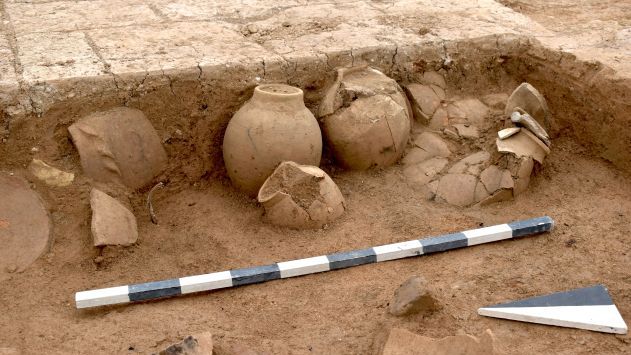 Pottery vessels, in which cuneiform tablets were stored, are standing in the corner of a room from the Middle Assyrian period (c. 1350-1100 BC). (Universities of Freiburg and Tübingen, KAO).

An extreme drought in Iraq helped a team of Kurdish and German archaeologists to uncover what is believed to be the ancient city of Zakhiku. Zakhiku had long been lost underneath the waters of the Mosul reservoir, according to a press release from the University of Freiburg.

Zahkiku, which is believed to be at least 3,400 years old, would have been located in the territory of the former Mittani Empire. In that empire, which held onto power from about 1600 to 1200 BC, Zahkiku likely played an important role as a trading hub, with the city sitting alongside the critically important Tigris River.

A persistent drought in southern Iraq, which some have attributed to climate change, helped the multi-national team of archaeologists learn more about Zahkiku. As the unusually intense drought continued, officials and farmers drew more and more water from the Mosul reservoir to keep crops in the region alive.

Once the water level dipped low enough, archeologists quickly moved in to excavate and study the ancient city. As the water levels in the reservoir lowered, the team was able to uncover a palace and several large buildings on land that had been underwater just months earlier.

The archeologists used their limited window to uncover more details about the city’s grand palace, which had been studied previously in 2018. They also documented the discovery of several large buildings nearby, including a multi-story storage building and a large industrial complex.

“The excavation results show that the site was an important center in the Mittani Empire,” said Kurdish archaeologist Dr. Hasan Ahmed Qasim, chairman of the Kurdistan Archaeology Organization.

The German-Kurdish team also discovered something they never expected to find: more than 100 clay tablets inscribed with cuneiform, the ancient writing system used by peoples throughout Mesopotamia, including in the Mittani Empire.

“It is close to a miracle that cuneiform tablets made of unfired clay survived so many decades underwater,” Pfälzner said, adding that they hope the tablets will help provide previously undiscovered information about the Mittani Empire and the shift toward Assyrian rule.

Before water levels rose in the reservoir again — once again submerging the ancient city of Zahkiku in the waters of the Mosul reservoir — the archaeologists managed to cover the newly discovered buildings with tight-fitting plastic sheeting, preserving the fragile site for future study.