A flash and bang was caught on neighbor’s security camera as lightning hit a house — one of several such strikes this week.
By Allison Finch June 6, 2022
Facebook
Twitter
Linkedin
Email 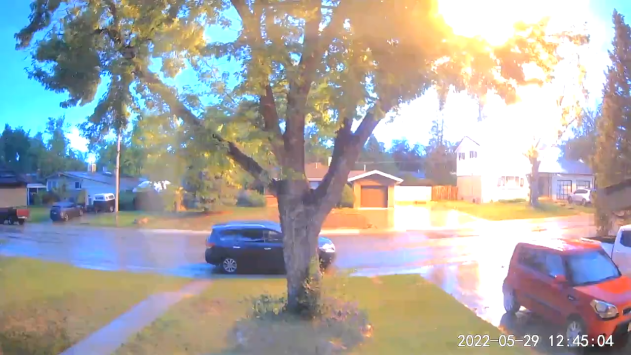 A neighbor's surveillance camera shows lightning striking a house in Denver, Colorado, on May 29, 2022. (Courtesy of AccuWeather)

The summer months are the peak of the lightning season in the United States, and several surveillance videos have gone viral over the last week showcasing the power of damaging thunderbolts.

Typically, security cameras are used to ensure there are no unwanted visitors on someone’s property. However, this past Sunday, in Arvada, Colorado, just northwest of Denver, one family’s security camera captured the moment a bolt of lightning struck their neighbor’s house.

Scattered thunderstorms were moving through the Denver area on Sunday, and just as a special weather statement issued from the National Weather Service (NWS) in Denver was set to expire, a loud boom rattled one home. Homeowner Amanda Strawn and her mother fled the house for safety after what sounded like a bomb hit her house.

“We ran out ’cause we thought it was the tree coming down on our house,” Strawn told a local TV station. “That’s what it sounded like.”

Once outside, Strawn’s neighbor, Kevin Gutknecht, and his father-in-law, Rex Hanks, came running over to inform Strawn that her house was just struck by lightning.

“We stepped outside; the neighbors came out holding their ears, wondering what in the world happened,” said Hanks.

Hanks watched lightning strike the house while Gutknecht’s security camera captured the whole event. After watching the video, Strawn was thankful that her family was safe.

“I don’t know how anyone survives something like that,” said Strawn.

Strawn told the local TV station the lightning strike moved from the tree in her front yard to the drainage system, causing a little fire on the right side of the roof.

Multiple other appliances were broken or damaged from the strike as well. While Strawn still doesn’t know the extent of everything impacted by the lightning, the damage included a broken television, thermostat and outlet. There were also a few burn marks on the outside of the house.

“It looks like lightning jumped from the tree and entered the house at one or more points along the gutter. Lightning is always trying to find the shortest path to the lowest point, and if it went through the wiring inside the house, it may have been going for a pump in the basement or other entrance to the ground. They will probably find more damage,” Ferrell added.

Vaisala’s National Lightning Detection Network pinpointed the strike of lightning that hit the house, Chris Vagasky, a meteorologist with the Finland-based company, said on Twitter.

In another incident the next day, a local fire department confirmed a house fire in Walton, Georgia, was caused by lightning. Walton is located about 50 miles east of Atlanta.

Two days later, similar damage was reported when lightning struck the side of a home in central New York on Wednesday. The lightning ripped up the side of a home in Manlius, New York, which is just east of Syracuse, displacing floorboards, damaging an outdoor deck and ripping through the ground, plastering dirt on the deck railings.

The woman described the sound as the biggest explosion she had ever heard. She told CNYCentral, a local news station, that the house shook, knocking down the television and tipping over pictures. Fortunately, she was not hurt.

“I’ve never seen it blow up dirt like that and make trenches in the ground,” Manlius Fire Department member, Greg Vandyke, told CNYCentral.

Exploding dirt was also sighted earlier in May when a gardener in Florida got the scare of his life as lightning struck his neighbor’s house. That strike was also captured by a security camera.

Vaisala’s Vagasky also confirmed a brilliant upward-moving lightning display in Oklahoma City on Wednesday, saying that 68 return strokes of lightning connected with transmitter towers at local TV stations. Over 194 million bolts hit the ground in the U.S. in 2021, and it’s not unusual for lightning to frequently hit transmission towers or skyscrapers. A report AccuWeather commissioned via Vaisala in 2021 said the Willis Tower in Chicago ranked first among the world’s tallest skyscrapers that are frequently struck by lightning.

Another video that went viral this week was this video where a house partially exploded after being struck by lightning, according to the video provider. AccuWeather was unable to confirm the date or location of the video.

While the safest place to be is indoors when lightning strikes, lightning can still find its way inside someone’s home whether it’s through plumbing or the home’s wiring. It’s important to remember that anything plugged into the wall, like a phone charger or computer, can quickly become dangerous. Taking a shower, washing dishes or washing your hands can all become dangerous as well.

«Previous Post
Seattle Slog: City Could Pick Up Nearly A Month’s Worth Of Rain In 3 Days»Next Post
‘Close To A Miracle’: Drought Reveals Submerged Ancient City