Seattle Slog: City Could Pick Up Nearly A Month’s Worth Of Rain In 3 Days

Rain that makes it east of the Cascades range would help ease a drought over much of eastern Washington and Oregon states.
By Ryan Adamson June 6, 2022
Facebook
Twitter
Linkedin
Email 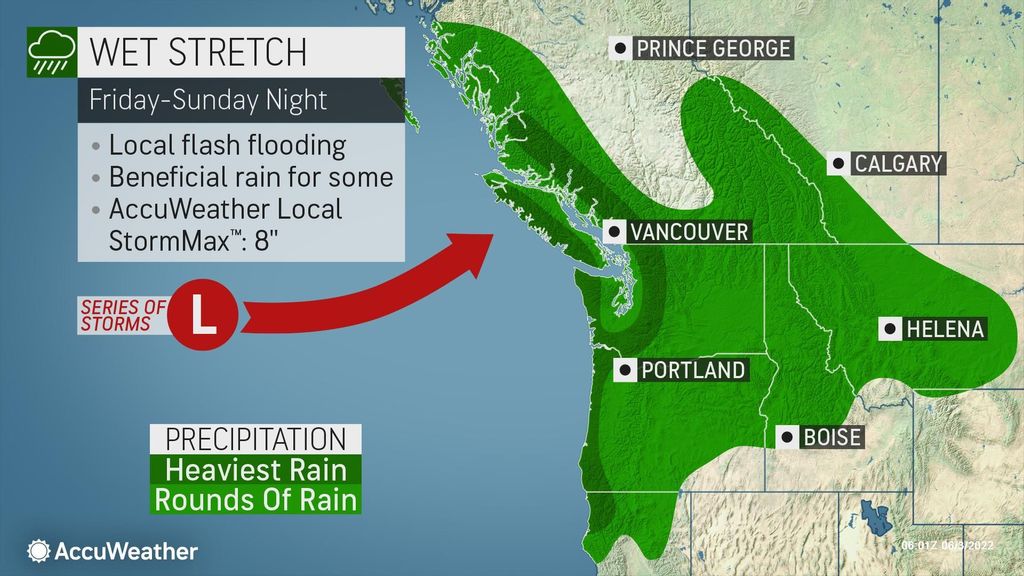 The Pacific Northwest usually experiences somewhat of a break from frequent precipitation late in the spring and through much of the summer, but AccuWeather meteorologists say it will be anything but dry this weekend in that part of the nation. Seattle could pick up close to a month’s worth of rain over the weekend. The same could happen in Portland, Oregon, too.

After just some spotty precipitation to begin June on Wednesday, generally light rain also fell in portions of Washington and northern Oregon on Thursday. Despite most of the rain being light, some rumbles of thunder accompanied a few showers. Both Seattle and Portland reported thunder on Thursday evening.

These thunderstorms will move into eastern Washington and eastern Oregon on Friday. A disturbance from the west could enhance rainfall with any thunderstorms, more so than was the case on Thursday. Some of the rain may be heavy enough to cause localized flooding. Despite the risk of flooding, the rain is needed in this part of the United States.

“Rain that makes it to the east of the Cascades will prove to be beneficial overall, with drought in place over much of eastern Washington and Oregon,” said AccuWeather Meteorologist Lauren Hyde.

The rain and any thunderstorms were expected move farther to the east on Friday night. However, there will be much more rain on the way.

“As a result of a dip in the jet stream, multiple rounds of rain will last through the weekend,” Hyde explained.

The heaviest and most substantial rain is expected to arrive in western Washington and Oregon on Saturday afternoon. Unlike farther to the east, western and central portions of Washington and northwestern Oregon have had a surplus of rain.

“The coastal Northwest had a wet May, and this storm could deliver a month’s worth of rain for June,” said AccuWeather Senior Meteorologist Alex Sosnowski.

With the drier time of year typically beginning in earnest in June, it will not take much rainfall to equal or exceed the amount of rain that normally falls for the entire month.

Portland receives only 1.63 inches of rain for the entire month of June, on average. That amount could fall there this weekend. In addition, there will be a possibility of embedded thunderstorms. Rain could be locally heavier in any thunderstorms.

Even less rain is typical in Seattle in June, with just 1.45 inches the average monthly total. At least an inch of rain is forecast in Seattle between Friday and Sunday.

Some of the rain could make it as far to the south as northwestern California. The entire state is in some level of drought, according to the United States Drought Monitor, but most of the Golden State will not receive precipitation.

Rain is also expected well inland across Idaho and western and central Montana but with lower totals.

“Rainfall amounts can vary across the Northwest, but the coast is expected to receive the most,” said Hyde.

The region will dry out during the early and middle parts of next week. The next rainmaker is unlikely to arrive any earlier than Thursday.

So far, precipitation in Seattle has made a complete turnaround from what the city received last year at this time. Seattle experienced its driest spring and summer in 77 years last year, with just 6.78 inches of rain measured there from March 1 through early September. Just last month, Seattle recorded 3.82 inches of rainfall, well above the 1.88 inches the city typically measures in May. That mark was less than an inch shy of the 4.76 inches recorded in 1948, Seattle’s wettest May on record.