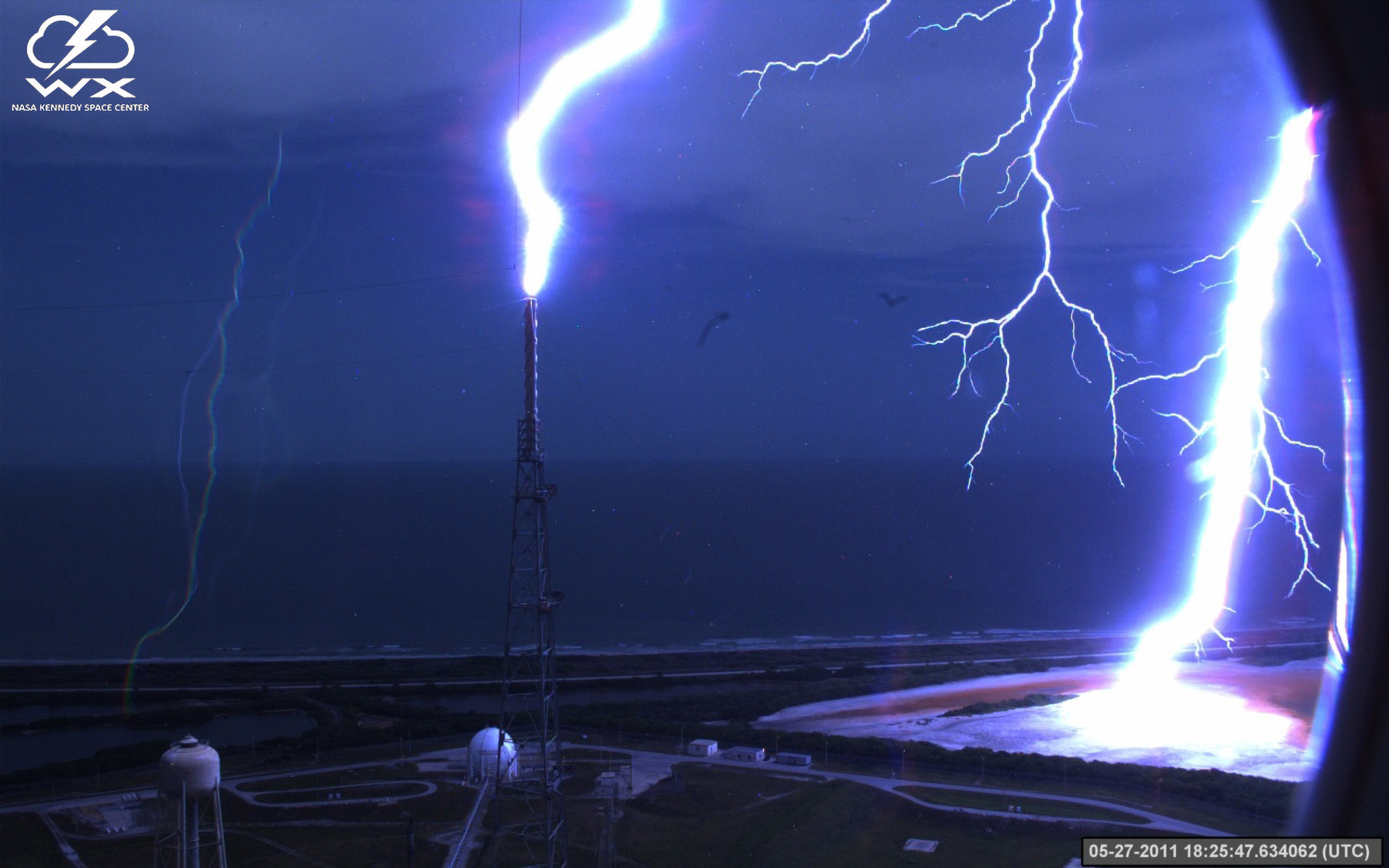 A lightning strike is recorded at Launch Complex 39B at NASA’s Kennedy Space Center in Florida in May 2011. (NASA/Zenger)

This NASA clip shows over 10 years of lightning bolts striking the protection system at Launch Pad 39B at the Kennedy Space Center in Florida:

The US space agency said they decided to share the images after the Kennedy Space Center recently experienced the “most powerful lightning strike” ever recorded.

NASA said in a statement: “The most powerful lightning strike ever recorded at NASA’s Kennedy Space Center recently put the Florida spaceport’s lightning protection system at Launch Pad 39B to the test.

“On April 2, the system’s high-speed cameras activated after picking up weather conducive to lightning in the area.

“NASA’s Space Launch System (SLS) and Orion spacecraft were on the pad for a wet dress rehearsal attempt in preparation for the Artemis I launch, raising the stakes for the protection system’s role.

“The storm produced lightning that struck inside the pad perimeter four times, including one which produced only the second positive lightning strike at pad 39B since the pad’s new ligtning protection system was installed at Kennedy.

“Positive strikes, which transfer positive charges to the ground, are rare and account for less than 5 percent of all cloud-to-ground strikes. They typically send a more powerful surge of electricity to the ground, making them more dangerous than the more common negative strikes.”

Dr. Carlos Mata, who designed the lighting system for NASA, said: “There was a tremendous amount of energy that was transferred by this positive event.

“After more than 30 milliseconds, we still had almost 3,000 amps flowing through the ground. This particular event falls into that tiny percentage – less than 1 percent – that you just don’t expect to happen.”

NASA said: “The first positive strike at Kennedy occurred in 2011, the first year the system was operational, though that one was significantly weaker and occurred outside the pad’s perimeter.

“There was no damage to the rocket or spacecraft, despite the large electromagnetic field generated by the strike.

“The system was one of the first things added to the upgraded pad to protect technicians. Since the system was activated, there has not been a lightning strike within the intended area of protection at pad 39B. Even the recent history-making flash of electrical energy couldn’t blemish that record.

“Several years ago, while working on a contract as Kennedy’s Advanced Technology and Development Laboratory technical lead, Mata used software he designed to run simulations for a new lightning protection system at the pad.

“During design, he positioned the towers using this software and was able to obtain full coverage of the mobile launcher by using three lightning towers, rather than the single tower that was part of the previous pad infrastructure during the space shuttle era and only partially protected the orbiter.”

NASA added: “At nearly 600 feet, the taller towers are positioned to provide more protection to flight hardware. The height of the towers is a function of the height of the mobile launcher and the SLS rocket when at the pad.”