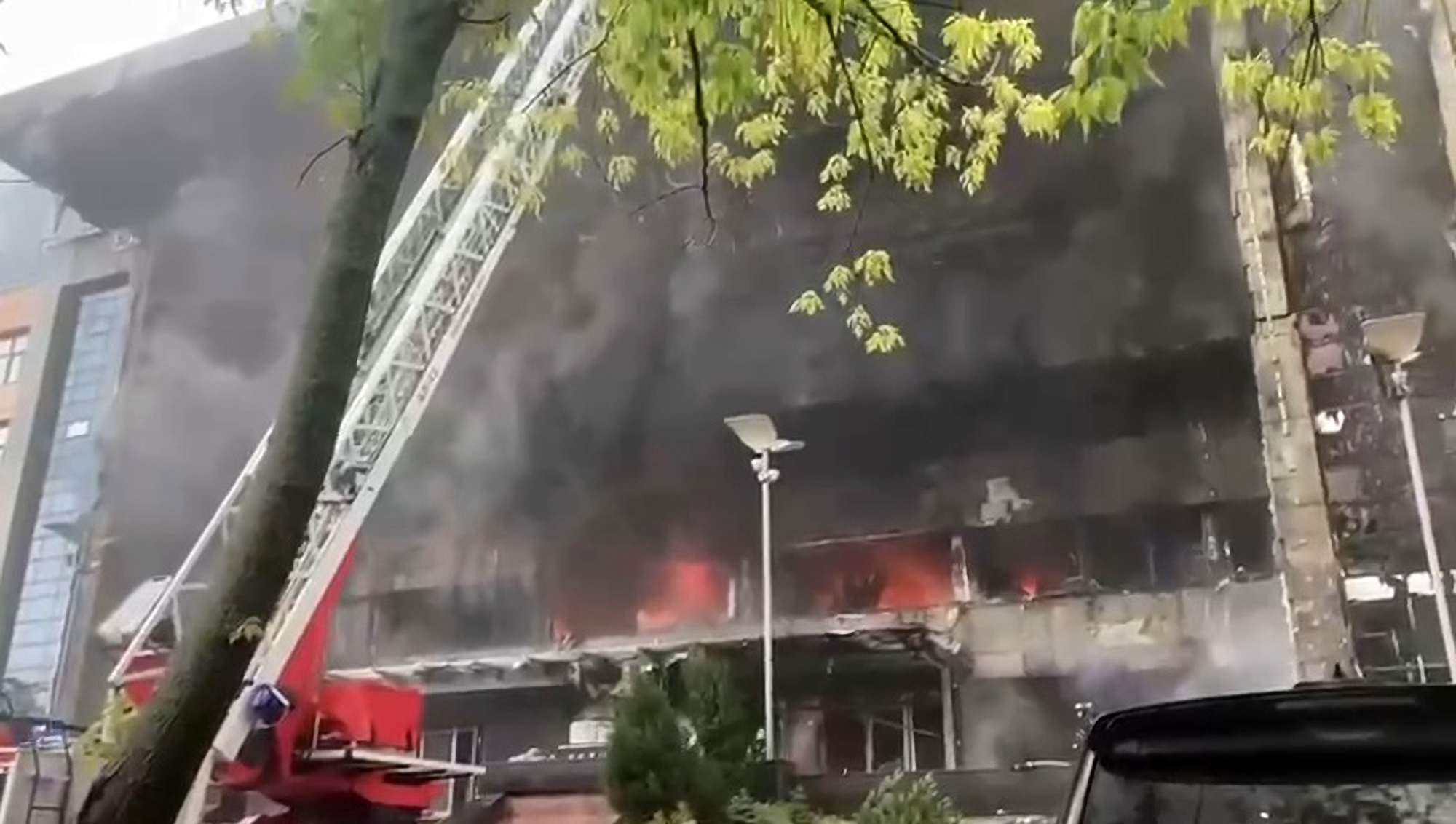 The business center 'Setun' is on fire in Moscow, Russia. (@mchs_official/Zenger)

These shocking images show how hundreds of firefighters battled a huge blaze in Moscow after a business center went up in flames this morning.

The huge fire, that led to the deployment of at least three helicopters, has now been put out, according to the latest information from the Russian emergency services.

The images were obtained from the Russian Emergency Situations Ministry, who said that the incident took place at the Grand Setun Plaza Business Center in western Moscow on Friday morning, June 3.

A first piece of footage shows a fire engine with its ladder extended as firefighters enter the burning building while massive flames and smoke can be seen emanating from it.

Other images show a firefighter at the top of a ladder spraying water at the building with a hose. A third piece of footage, shot a little later, shows black smoke billowing from the building and additional fire engines deployed to the scene.

The building was evacuated, with the business center employees being taken to safety, but there were fears earlier that people might have been trapped on the upper floors.

At first, 86 emergency workers were deployed to the scene along with 16 emergency vehicles, according to the Ministry of Emergency Situations.

The fire, which engulfed the first to the fourth floor of the building, quickly spread, with it eventually covering a reported 1,000 square meters. Another 100, then 200 firefighters were deployed to the scene to tackle the huge blaze.

The Russian emergency services said earlier this morning: “In Moscow, the fire is being eliminated in ZAO, st. Gorbunov. Upon the arrival of the first units, it was established that a fire was taking place in the administrative building. According to preliminary information, there were no casualties, information on the area is being specified. 86 people and 16 pieces of equipment are working at the scene of the fire.”

The emergency services then said a little later: “According to preliminary information, the fire area is 1000 sq.m. 180 people and 41 pieces of equipment are working at the site.”

In an update issued a little later, at around 10:30 a.m. local time, the emergency services added: “According to preliminary information, more than 120 people were rescued from the burning building, the search for people continues.”

“The building of the Grand Setun Plaza Business Center operates on an area of 1,100 square meters, 2 people were injured, 120 were evacuated, 11 were rescued with the help of special devices. An inspection is underway, there may be blocked people in the building.

“In total, more than 340 people are involved in extinguishing the fire and about 100 units. Three helicopters are involved.”

The emergency services then issued a final update saying that at 12:32 p.m. local time, the fire had been “completely eliminated.”

It is currently unclear how many people have been injured. It was also unclear at the time of writing what caused the fire.