A new species of beetle has been discovered by scientists in Brazil. They're key in the production of red propolis!
By Thomas Hochwarter June 6, 2022
Facebook
Twitter
Linkedin
Email 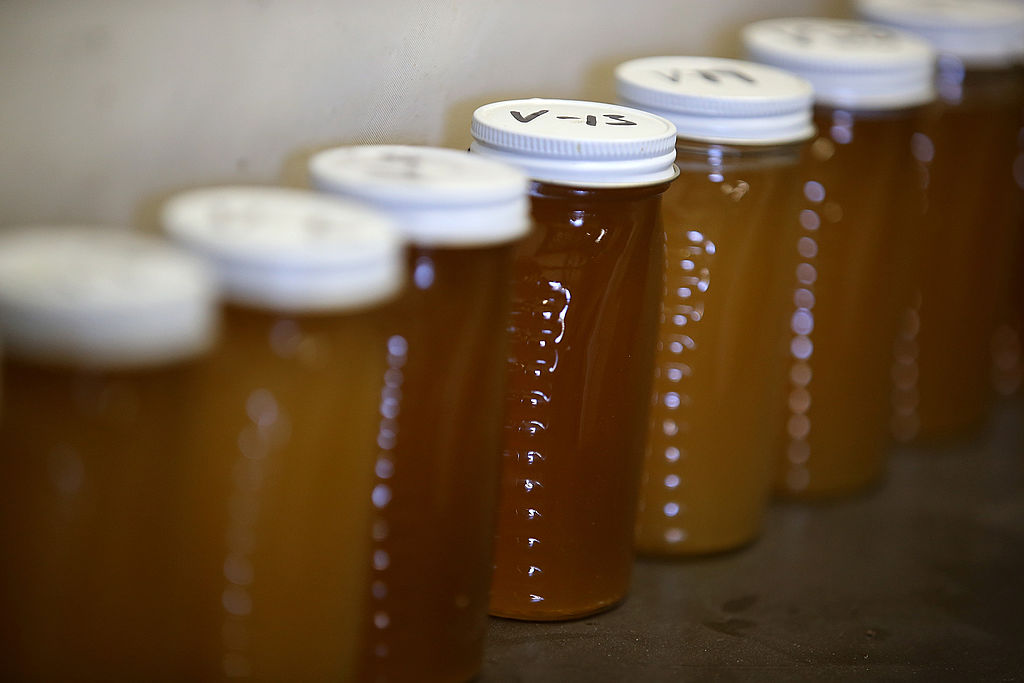 Samples of honey are displayed on a shelf at Gene Brandi Apiaries on September 4, 2014 in Los Banos, California. (Photo by Justin Sullivan/Getty Images)

Scientists in Brazil have finally identified an insect as the key agent in the production of red propolis, a coveted extract praised for its anti-inflammatory effect.

The new species of beetle in the family Buprestidae – now called Agrilus propolis by scientists – was discovered in the northeastern state of Bahia.

Researchers from Sao Paulo University cooperated with the city’s Zoology Museum and Italian entomologist Gianfranco Curletti from the Civic Museum of Natural History in Carmagnola, Italy, in identifying and examining it.

Jairo Kenupp Bastos from the university’s pharmaceutical sciences department revealed he had first heard about the insect during a visit to Bahia.

Bastos said: “Local beekeepers told me about a tiny beetle that made holes in a plant called Dalbergia ecastaphyllum, a member of the pea family, and that the holes leaked a resin used by bees to make red propolis.”

The scientist took several larvae of the beetle to the Museum of Zoology of the University of Sao Paulo. They were analyzed there under a microscope to find out more about the process.

Ph.D. candidate Letizia Migliore – who participated in the research – said: “This is how we discovered this new species in the family Buprestidae, which was named Agrilus propolis.”

Gari Ccana-Ccapatinta from Sao Paulo University explained: “We carried out phytochemical analysis simultaneously at our lab to confirm that the resin and propolis had the same chemical composition.”

The researchers managed to determine their botanical origin – and prove that this new species of beetle contributes to the production of the sought-after substance.

The two groups’ investigations reveal that beetle larvae develop inside stems of the plant. As they reach adulthood, the insects emerge through holes, together with the resinous exudate.

Zoology Museum lab director Sonia Casari said the result of our research was of great importance.

She underlined: “The agent that induces the host plant to produce the key ingredient in red propolis has finally been identified. Until now, we had no information on the species of insect that could be behind this phenomenon.”

Casari said the data could act as groundwork for further research on the production of red propolis. The scientist stressed the examination’s potential economic significance considering the high price of red propolis capsules and extracts.

Red propolis is a resin produced by honey bees (Apis mellifera). They collect the reddish exudate on the surface of its botanic source, the species Dalbergia ecastophyllum.

It has numerous applications in treating different diseases and complications such as wound healing due to its anti-inflammatory, antioxidant and antibacterial properties.

Propolis has been used in traditional medicine for many years. It is currently increasingly promoted by the pharmaceutical industry.

The University of Sao Paulo is the largest public university in Brazil and one of the South American country’s most prestigious educational institutions.